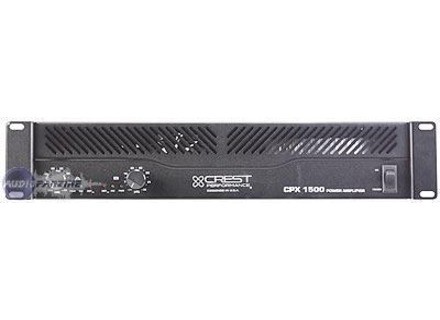 Pearl-James's review (This content has been automatically translated from French)

Crest Audio CPX 1500
4
HA! CREST same for a range between (a copy of the Peavey PV2006 confome and manufacture ds same factories lol) c costo!
its gonna do 8 me as I was not a PPIN, i troune donf has 3 to 4 times a week for the singer, with GCL enable (signal compression for his own protection) no problem there cash it does not heat the mass, ventilation is a 2 speeds, 2m is but very rarely in action.
Protection: DC, temperature, circuit court (have no real protection c a fuse for all lol)
I have both a cost ju ds a cable dangling 10 minutes he attempt an operational again and all the tps that the problem is not with rsolut he cuts, and it goes well toujouirs occi
he ossi clippings fquences to integrate Filterregulators (gnial for bi-amp)
speakon outputs and terminal / combo and among terminal screw.

Into 4 Ohms with 4 speakers buttocks, although they sent but that 500 watts and heats up quickly and cut into three minutes if you shoot too.

to top 2 speakers 8 ohms or 4 speakers 4 Ohms cut it from overheating.

The only way to be fully exploited to develop 1OOO Watts Bridger, I put 4 speakers in Bridger is above 1 K = 1000 Watts RMS speaker power for 1 K power amp Crest.
I keep mine because it does not cut into Bridger.

The QSC ^ weighs 35 POUNDS of heavy but the bomb!
Soon

I find in google to see my gear ----> DJ Watts Animation

10 people did not find this review helpful

bigdav's review (This content has been automatically translated from French)" Heavy efficiency!"

Crest Audio CPX 1500
5
I purchased this amp about a year there, all I can say is it hard for 300 watts into 8ohms.
I couple with two home HD102 Fenton (AS10x super tweeter and 25cm diffraction selenium ST324) and two subwoofers in the same brand (AS15x 38 cm), adcape not bad, it heats almost not, is very stable, never a break at home or at night (the fear of all dj) it is fitted filter high pass and low pass, it Paut be coupled to another unit from the m my range without adding an active filter it has a security being protected for your speakers in your passion of the god Dcibel (a limit case) but it is disconnected with a simple push the back of the amp.
Most long-term power handling, low-impact, mdiums of clear, crystal clear treble (but must be measured with a table under penalty of having acute screaming piezo type), fairly quiet fan (good for monitoring the RVer should not you hear) and 300 watts into 8ohms true, the price 449 euros (it's cheaper than some amps boost crap) and finally, Speakon neutrick home (class)
The - the record in English (translated quite boring), deprecated a subwoofer with a quip 18pouces (46 cm) is rather soft, the connections (when you know it's not English difficult to know what are all taken), the mouth a little DMOD (good but the main is inside), weight (25 kg right even if you dplacez 10 Congratulations once you can have the same dplacer 250 kg weight as a bag of cement, good training for the masonry behind)
The (Yeah it is but could be better) a notice in French, a cheap recycled paper and imagine the happy air of small dj franais who buy this amp.

Did you find this review helpful?yesno
»
Read the 10 user reviews on the Crest Audio CPX 1500 »