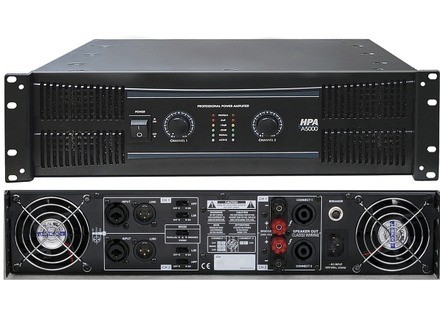 dcibel's review (This content has been automatically translated from French)

Hpa Electronic A5000
4
Here I made two outings with this amp, I used to feed in rcf 4horn l18n402
the first time I was started it was not to push but to honing sub (2 * 5h)
then caught by a wave of panic I was in Emene teknival or 4 days it has run on four rcf!

premeiers the day shift and the amp-10db input has already 1m50 boxes can feel the presence in the bass for info boxes was cut at 50Hz / 120Hz.
Then I change the cut-off for cross 40hz/120hz and mount the amps to 3 / 4 in apliquand 0dB input, the resort is the magic of my subs!

Lampl has not clipped once, and was not even considered surchaffe,
my little experience does not allow me to compare it to other high end amps but I know there are instructions on the mark in 2 * 2200 4Home and it is true!!

I was already in my hand crowm of 3000 or w peavay of 3800W and there is nothing wrong with the power available at terminals hpa!
musicality issue??
response to low frequencies? frankly I think that amp was working 70% of its not-Standing on an amp or demand too! the response in the low end is good as well as by the level of acute medium that I have for now (15 and 4delta 4pulses yorkville in 15) and bah it There's too low !!!!!
I am not of this amp dessu especially compared to the price or I was touching! I went to invest in a yorkville may be more "musical" but also less powerful and took double the hpa!!

I had my disposal two m1000 m an inter c2 and c2-450-800 and one of JBSYSTEMS vzx3.5 of macmah, so it's certainly the most powerful amps I have but it does not disappoint me by the rest of the group!!

in any case it will take a long view but if I have the opportunity to re 4SUB rcf I rush buy a hpa A5000 without hesitate
the only problem and I think it must be like on other amps with oversize ventilators, cest we can not disassemble the dust filter facillement more!! is a real upright vacuum this stuff!

after yes it is noisy because it must necessarily refrodir the component but already with a facade of 5kw makes you forget it!
ps, not tested in 2ohm but I think fo push the envelope too!

I takes only 7 because I do not know what the temp will give ca!
I love doing the cobaille especially for this kind of value for money !!!!!
4

Lout's review (This content has been automatically translated from French)

Hpa Electronic A5000
1
I do not possde this amp, but it was lou for testing and see what's in the stomach.

First Prev ngatif point, I expected to see a large toroidal transformer are given weight. No, the transformer is small. The great advantage of its weight comes from the cooling radiators "low cost".

The electronic circuit is made of PCB (which is fragile and unstable in the heat) often used by cgnie boost and, for that matter a nice photo shows how long before being removed.

The son, the son is just bah bx, can be a can short but it does not matter.

Components Exceeds the original value of 10%, we did not test for all hard resolder properly.

APRS cell test sound on subwoofer 1000w. The speakers move a lot but does not produce its normment even up into protection paths. Bizzard. Yet the housing is a Dynacord Alpha B3! the test chamber was quickly completed because this box is not me and too expensive to be maltreated.

The protection, I do not know what to say. A simple signal protection is activated without the clip LED lights up. On a court-circuit LED clip lights but no protection!

The damping factor is measured 260:1 to 8Ω.
The report qualitprix? for an amp prs of 1000 we would expect something much better. At this price it is better a Crown Macrotech works 1000x better.
PS: I am open any test with the amp and those of another brand.

fritos's review (This content has been automatically translated from French)

Hpa Electronic A5000
5
Feeds esw equipped n 401
personal budget for it fulfills its function, I would agree and no agreement with an earlier opinion
you say yes my second hand at the same price you can have a york, c is on my second hand !!!!!
I doubt that he sent in 1100 w 8OHM without saturation to power my subwoofer 800 WATT's the fact, after having time

compared with a Yorkville AP4040 No they are not released and less heat, less
for half the cost

the XLR connectors I found means, when you plug one wonders if plugged
c is not Neutrix

I think this amp is for my subwoofer 800w 8ohms I doubt no more after
Did you find this review helpful?yesno
»

Fred60's review (This content has been automatically translated from French)

Hpa Electronic A5000
4
I own and use this amp for 6 months discomobile, in lieu of a hearing care AP3000 dropped me shortly before ... It amplifies a pair of boxes Yorkville Elite LS808 and I must admit that the result is pretty good for an amp of this price. The feeling of power has nothing to do with the AP3000 which appeared much lower (475W / 8 against 1100W / 8, powers announced ...). I am not unhappy with my purchase although initially I was a little tank and would have preferred a Crest or Crown chances.

I do not know the limits of this amp because I do not use at low power, but when you push the knob, it works hard!
That said, intensive use and boost other than recorded music (and therefore highly compressed), I probably would not have made this choice because the dynamic is not as good as a top-end model, and quality of the components either (the price is justified somewhere anyway ...)

I recommend this material for non-regular use, to distribute recorded music (CD, MP3) dscomobile type, and one who looks a very good compromise between quality / price / power.
--------------

After nearly two years of use, I reinforced my 7 / 10 departure because he deserves it frankly. Aside from its weight really binding on the back, the feeling of power over my pair of boxes Yorkville LS-800 is surprising. I have never had any problems so far, and I can certify that my old hearing care AP3000 was very far from this reserve power, but the damping factor, however, was better. That said, to amplify the CD, it's ideal. I would definitely do it again this election, unless an opportunity arose amp pro ...
Did you find this review helpful?yesno
»
Read the 9 user reviews on the Hpa Electronic A5000 »

Hpa Electronic A5000 manuals and other files