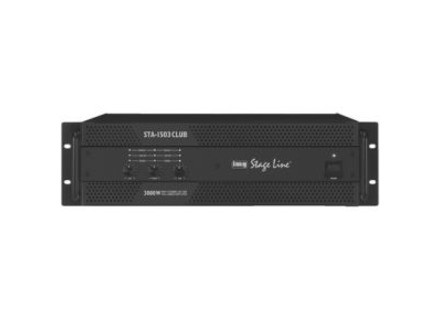 img Stage Line STA-1503 CLUB
5
Until then I was not a fan of 3-channel models, notament in terms of the bass through a single channel, even powerful, the load impedance of the SUB channel remained a delicate feature. Also convinced that the flexibility of cutting spectrum bands using external filters to none. However ...

Then ... I had to build me a second STA-322, one for the "low" range and one for the beach "low mids", the seller informs me that IMG Stage Line no longer manufactures this model and therefore proposes the STA-1503 as a natural evolution, even approaching the power of two STA-322
Confirmed after consultation characteristics about various tests and

Performance and quality throughout the entire frequency band, a multi-circumstances especially his "scene" like its predecessor,
Participation in its cinema system envisagable, thanks to the choice of crossover frequencies channels Sats / Sub
Protections against overloads are further enhanced by the plug manufacturer.

Integrated filters are an independent amplifier for use in 2.1, subject to the availability of speaker 500Wrms low divided into one or more speakers, but the performance of the SUB channel go well beyond (I have not made test into 2 Ohms, which under 4 Ohms).

Do not overlook the cords connecting speakers bass, 1300 Wrms / 2 Ohms low frequency it borders the 25 amps ...

R and L channels, cut between 70 and 120 Hz, are efficient satellites that will necessarily accept the low mids.
If the satellite does not support hézitez to adjust the high-pass 70Hz, you will be able to taste the dose proportion of fast soft low / (SUB / SATs)

You'll enjoy the benefits of multi-amplification with a single device but if you only have two multi-channel speakers, they must be replaced by a combined Satellites + Sub (s) or simply equip one or two Sub (s) included.

The independence of the connection of the internal filters of the three channels makes it soft and easy integration of this amp to an existing multi-instance amplification system:
I use RL channels to the beach "high mids" [280hz-> 20khz high-pass filtered by external] a multi-amp and I use the SUB channel for the "low" range [40> 120hz] system the same multi-amplification system, four boomers 300Wrms/Ø38cm/4ohms.
(There is a hole between 120 and 280Hz, but no, I gave this beach "low mids" [70 -> 500hz]? STA-322, see the description)
This configuration is not final, I'm still working

Improved ergonomics noticed:
(Compared to STA-322 described by matter)
Screw fasteners Rack particles have been added to the rear, it necessarily extends beyond the rearward sides of the body which now protects connections when handling the unit
The power transformer is type O and placed in the center. (25kg on two arms that prevents Muscle way "hermit crab"!)
Round section handles not hurt Doigs.

Suggestion box for the manufacturer:
LED "Power" is a bright white hair. In a "piece zique" the soft lighting you can not see it,
I covered a small square gelatin violet which is not detrimental to the sober finish the front.
Did you find this review helpful?yesno
»