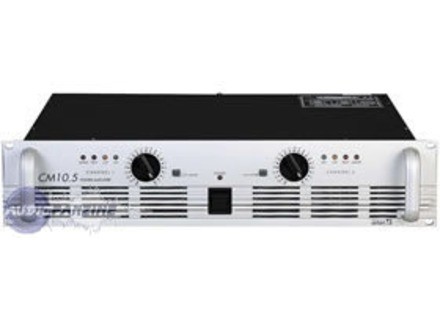 Mig31's review (This content has been automatically translated from French)

Inter-M CM15.5
3
I use it for only one month and a half. I tested it in concert. I was surprised at the result! It really sends the power! Jai speakers 400 watts! And that's enough for it.
I do not know if I am objective as it is the first power amp I buy but I'm still well informed before making this choice (almost a year). I do not really regret it.
However, is it normal that after a week he receives more signal in stereo. Jai's bring it to the store one month after purchase. It's not cool at all even if java to pay anything. So, I wonder if this product has a good life (jai's fall on the wrong series!)
I put that 6 because of the failure after a week!

daddy dj's review (This content has been automatically translated from French)

Inter-M CM15.5
5
I own this amp for 3 years, I have no complaints if something demonic power, no overheating at high power, watts are real, great value for money,
to buy the closed eyes, and if you put a preamp then the walls will focus shaky
Did you find this review helpful?yesno
»

polack's review (This content has been automatically translated from French)

Inter-M CM15.5
5
I use this amp soon 1 year since I've never had any problems with it, report quallité EXCELLENT price. I s'épare to replace it with a phonic 2500max which is 50W less per output, because I already have one and to bridge the two amps, I tried to have the same input frequency for the sound between the same volume in each amp. I say these two amps are worth it.
I'll buy without hesitation the two models when I have sold.
Did you find this review helpful?yesno
»