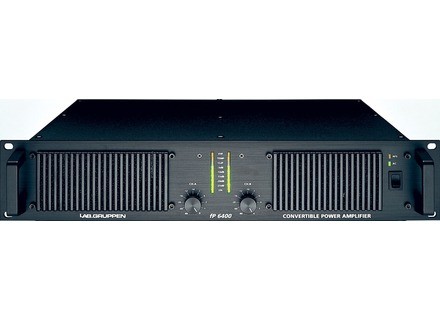 mediacomm's review (This content has been automatically translated from French)

Lab Gruppen fP 6400
To my knowledge the lab gruppen amps y 'no better now that's just my opinion
reliable leger faithful do not color the sound course with a flat eq console
but super hard to find on any opportunity for fp fp 3400 and 6400
we are provider and used since SEVERAL years nothing wrong pâs failure etc ...
will soon get to buy the 4 separate channels for a bit anyway alleviate our opinions racks amateurs but not before September 2008

to buy absolutely .....
Did you find this review helpful?yesno
»

The winner of the test on the medium / high and I must say hands down is the itech 8000 with a dynamic, precision, unbelievable ...;
But it really is not capable of the sub driver as he finger yet 4000 w / 4 per channel anyway.

The winner of the test on the bass is the qsc pl 380, which down the lab gruppen to be much, but down nonetheless and that is audible on both system !!!!
The qsc a rounder sound, and hard to explain but it does sound better subs in the bottom "he breaststroke finally hard to put into words."
Yet before the test I already was leaving the sight of all the fantastic reviews on the 6400 fp to push the subs that its going to be the big winner, and maybe not.

So to make a good choice in high-end amps any brand, try own system sounds with as forums reveals some truth but I have proof that the lab gruppen is not better than the qsc pl 380, and the crown is really on top of the mid / high, the other amps on mids / highs are similar, may very audible difference, share good report on the itech.

Lab Gruppen fP 6400
5
Tried coffee together on medium heads acute APG.
Great sound, even very strong without being aggressive.
I opened after concert (buying opportunity), while nickel is in the modular design is well thought out, and it is built to last with high-quality components.
Excellent material.

Did you find this review helpful?yesno
»
Read the 8 user reviews on the Lab Gruppen fP 6400 »