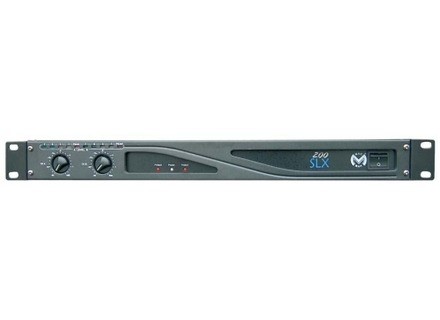 Mac Mah SLX 200 II
4
I use three models in this SLX SerieII the 2x200, the 2x500, the 2x600. A powerful set and smoothly. Well built, these amps are consistent in specifications, the record is clear and comfortable sound. The fans are quiet and efficasses. The generous connectivity and good quality. The façade design is nice.
A series amp MacMah very functional.
Did you find this review helpful?yesno
»

cabheelvert's review (This content has been automatically translated from French)

- What is so special that you like most and least?
footprint ... weight ...

- Have you tried many other models before buying it?
yes!

- With experience, you do again this choice? ...
Surely not! Although I totally respect the brand Mac Maha
compact amps from experience should be avoided in general ...
I have seen problems of heat dissipation for extended use ...
The third night I used it, or in small groups (with appropriate bodies) after 8-9am he farted, 7 of 8 amps of grilling, with the added puff of smoke comes out ^ ^ After review, overheating was the cause of the failure.
It's still a good amp, share some characteristics, but I have not had any luck with him, or notice.
Did you find this review helpful?yesno
»

Have you tried many other models before acqurir?
No, but it is not the only amp I achetbr />
What is the specific feature you like best, the least?
Minimum: The sound quality
Plus: His power handling

Fan noise:
- There are 2 on the SLX 200 II (unlike SLX 200 i do not availing oneself that one)
- They make a little noise, rather as a means rolling noise than fan noise. If your amp 4m in a very quiet, the noise is hardly noticeable.
It is fairly quiet at a low cost level. Of course, if we push the sound, the fans run faster, fawn linear with temprature.

Sound and its properties audio:
- Power: He can go very high, it does not saturate quickly. In bridge mode it holds the road really well.
- During my first news, I talked about in the crackling sound of electrical origin. Well, I plant the amp was too powerful for my high pass filter so the creaking came from the condo! Dsol ...
- Its in the mediums: Honestly, not one who tends to gnial ear. It gnre normment multimdia harmonics. Imagine a pure 300Hz sine, and frankly you hear the harmonics up to 1kHz! eventually PForm sound and this is the worst default of this amp as inviting. BUT, you have to listen!
- Its in the treble: It's alright, no crest for anything, the treble is fairly thin (but not crazy!)
- Its in the bass: A very low power, they are dnatures (sort of saturation) ... By increasing the volume, the problem disappears.

I find it odd for the default multimdia harmonics in the medium rather the impression of saturation and low in the bass. So, I rexpdi amp. Not finding the problem the customer service (very expditif) gossips very nice (Lille Nuloop not quote them) carrment given me a second amp (even ref) to compare. And, like!

I deprecated this amp for:
- Supply of good quality speakers.
Even if The characteristics are intressant on paper, they are less as costing.

I recommend this amp:
- Supplying powerful sources of low or medium quality.
- Feed a subwoofer (in bridge or not)

I did not test the amp for several hours.
I put a mark of 6 for the power / price and good faculties gr low medium and high level.
Did you find this review helpful?yesno
»