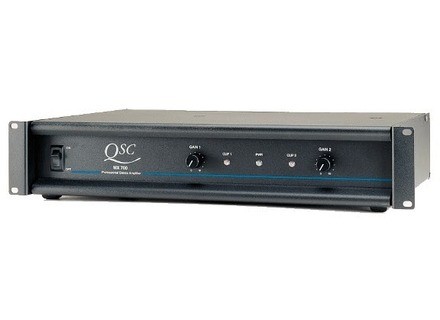 MX 700, Dual-Channel Power Amp from QSC in the MX series.

QSC MX 700
5
The QSC MX700 is a stereo power amplifier which is no longer being made. It is pretty simple as far as power amps go, but this one offers up a good amount of power in a sturdy build. Each of the two channel has 1/4" TRS connections as well as those for running speaker wire to it. The front panel has gain knobs for each of the channels and LED lights to show power and clipping, as well as few other things. It also has a big fan in the back of it to keep this guy cool, as it can certainly get hot when you've got it on for an extended period of time. It is rack mountable and takes up two rack spaces in a traditional casing. The MX700 is suitable for powering up passive studio monitors of all types, and I have used them with both a set of Tannoy and JBL monitors. The main thing to remember is just to make sure that your monitors match up with this in terms of power and ohmage. I've never had a problem with the QSC MX700 as both sets of monitors that I've run through it end up sounding great and how they should on the other end. There isn't any noise at all - the bottom line being that the MX700 does it's job and it does it's job well. Even though they are no longer manufacturing the QSC MX700s, they are still pretty readily available as I believe that these were discontinued not too long ago. The price doesn't make it the cheapest stereo power amplifier on the market, but it isn't very expensive and I would say that it is worth it for such a top notch power amp. If you're got some passive monitors that need some serious power, definitely look into the QSC MX700.

QSC MX 700
5
I bought two of his amps secondhand United States a year ago that I intended to do in dpart bridg on sub. It is to give the dpart an amp or studio room cinma. Namely it is certified by THX Lucas film. In the first tests in the sub 15 ". Dmnage It not bad, inlet of the game, dj CTAIT a good plan. Then try I have about 18" and round hits hard and clean and have them used for some time this year configuration. Currently, the sub turns on a 1300 United States gives just as well and I use an MX for stro return and the second still singing Bridge to amplification. This amp even if it is a bit feeble on paper in 8ohms Stereo is a marvel. I find that power gives 2x150W into 8 ohms and widely Exceeds, sending a heavy and a, n matter what range of frequencies. I bought one recently and it is the RMX dception compared to MX and the old States. I use also other amp like Crown and Mackie.
A remake I Do not hesitate to buy an MX, but can be a bit more powerful. I think this is one of the best SERIES QSC. Suprieur largely to RMX and GX. I wanted to add one little thing too, by purchasing the United States I took a big risk, the Food knowing states as they work in 120 volt, I was afraid of having to change the transformer to their happens because there is no switch to change the input voltage. Finally, CTAIT trs simple, there is a cot terminal of the transformer is as simple as changing the boundaries of three son and you're playing.