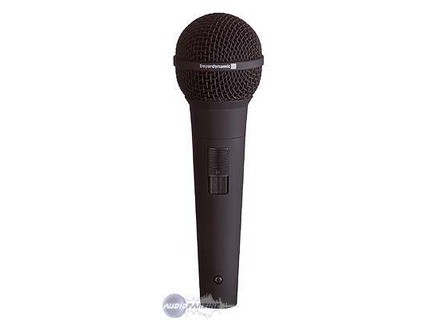 TG-X 58, Dynamic Microphone from Beyerdynamic in the TG series.

All user reviews for the Beyerdynamic TG-X 58

Average Score:4.6( 4.6/5 based on 3 reviews )
Value For Money : Excellent
Not satisfied with those reviews?
Our members also liked:

Beyerdynamic TG-X 58
4
I have been reviewing this unit as a replacement for my Shure SM58 which bit the dust some time back (only 3 years old!). This unit costs about $270 AUD which is considerably cheaper than the recommended retail price of a SM58!

This mic is a good performer. It has a nice even top end and a fair bit more sizzle than a '58. It seems to take less "effort" to sing with this mic. I could plug it in with only minor adjustments to my monitoring and FOH settings. It also recorded quite nicely. It would be decent as a hand held for a female singer as it is quite light. It also looks good.

It doesnt take close hard vocal as well as a '58. I like to sing very close to the mic and this seemed to "push" it a little too much. Backing off has its own issues such as feedback etc. which is a problem in some places we play that have less than desirable acoustic qualities. This mic also has an on/off switch which didnt seem to function properly when I first plugged it in. After a couple of clicks it worked ok but that didnt give me an immediate good impression. You can screw the on/off switch down to lock it, but I dunno....I always associate on/off switches with cheaper mics for some reason. I swapped back and forth between the sm58 and this mic quite often, and found that although the sm58 did sound a little duller, I could seem to get more out of it when required.

It is quite light, a nice soft lacquer coating (black) and comes with a solid clip to mount on a stand. Looks nice.

This mic is quite nice. I didnt keep it because we did have a couple of problems due to all the other guys using sm58's so its probably best I keep to the same thing.

The Beyer would be a great mic for anyone starting up a PA system or for a backup. I didnt try it on instruments so no comment there.

Plbino's review (This content has been automatically translated from French)

Beyerdynamic TG-X 58
5
I use it to conduct interviews to replace a Shure SM58, the hit "soft" body + an off button lock, the presence of a much better voice, sound at hand is comparable, in clear I no longer use the SM58 for this function it replaces ..... plus I paid 33 euros on Ebay!! 90 euros nine ... but with the falling dollar, the risk of being beaten shure in price!

A very good value for money .... to buy without hesitation

Porridge14's review (This content has been automatically translated from French)

Beyerdynamic TG-X 58
5
Dynamic microphone versatile enough. I use it for the stage and recordings, mainly of the vote.

This is a great microphone. To compare with other dynamic mics, I'd say I find it much better (the voice) that the Sennheiser. I especially like his sharp, nor too low (even with a windscreen) or too aggressive. For the price (100 euros, I think), I certainly would do the same choice!
Did you find this review helpful?yesno
Cookies help us improve performance, enhance user experience and deliver our services. By using our services, you agree to our use of cookies. Find out more.