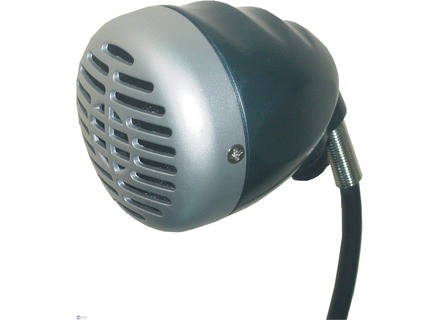 All user reviews for the Superlux D112/C Harmonica Microphone

Average Score:3.8( 3.8/5 based on 3 reviews )
Value For Money : Excellent
Not satisfied with those reviews?
Our members also liked:

Spawn-X's review (This content has been automatically translated from French)"Really good value ..."

Superlux D112/C Harmonica Microphone
4
While purchasing, I gave an opinion on this hot model in a forum dedicated to the harmonica (http://coursdharmonica.xooit.fr/t3662-Des-avis-sur-le-D112.htm?q =) [post no. 11 of this thread] I can copy here:


For the price, that beam really not bad at all in the Chicago style.
Obviously, this is not a vintage JT-30 or a GB, but when it sends m ^ m not wrong I think.
Perhaps a tad more gain before feedback (though my preamp was perhaps a bit too saturax for Wink har ...), but m ^ m time, I have no GB on hand to compare actual .

So far, I used a small Junks of Fabz (one of those he made with pieces of Recycling. Mine is done in a stainless steel shaker and it sounds very good in clean, but distortion, m ^ m light, it really too much feedback so I do not use it on stage) and an old AKG D65S deplorable use vocal or instrumental, but I like good with the harmonica (managed via a volume pedal).

on the other hand, the D112 is much more cumbersome in the hand and is also relatively heavy.

I would not say more because by side sound habits in guitar, I do declare that through comparison of physical face to face, again, my experience microphones harmonica is not the most important, therefore, I&#39;m not the most legitimate to give my opinion.

The physical remains of the craft and practice that I can criticize.
So, I mentioned the weight (650g when m ^ m from the doc) and congestion. I add to that the fact that there is obviously no way to put the microphone on foot other than the fact to remove the volume pot, so to lose that (The manufacturer recommends in this case rather take a D102 / C, the volume knob and replaced by a screw thread for micro feet). Not a big deal for a harmonica pure juice, but the guitarist I am, it&#39;s a bit annoying since I often alternate between the two instruments (and not they also ...

). Another small detail embarrassing for me, the fact that the cable is mounted directly into the microphone (guided by a spring designed to secure the flexible cable bends detrimental to its base) and not be "disconnected" on the fly (A jack 1 / 4 female I might have been preferable). This is not necessarily a big deal, but on stage, I use HF transmitters for my guitars and so far I did the same for my harp. Ben there, if I want, I&#39;ll have to play the soldering iron.

Otherwise, something good, it&#39;s the volume knob which the race and very sweet and very nice and especially rigid enough not to disrupt inadvertently (if my Fabz whose knob is dressed in a button-type Chicken Head and is unfortunately a little too loose). And little more, a center detent in the middle of the race of knob allows him to identify physically easier to see where we are setting.
Otherwise, the finish is really good (very soft on the surface whether on the body or the grid), and the retro look is at the top. In fact, I truly believe that is not very far in terms of quality of many microphones that snobbery makes us pay dearly for while most 70% of the price only serves to pay the brand. Here is the Chinese cheap, but frankly, it gives off an impression of quality that does not displease me.

What is certain is that it is typed in relatively sound. The response curve given by the manufacturer indicates an amplitude of 100 Hz to 6 kHz with a slight hump centered on 2.5 kHz.
He leaves high impedance (load 100Kohms min), thus hair cell what it takes to a guitar amplifier and it comes out 4mV to 94dB (-48dBV/Pa).

In short, for now, I really like this microphone. I expect to have use a little more and particular live to say more but overall I find it really good.

Since the Opinion, of course I tested a little more detail, but mostly, I also purchased the Fireball V which gave me the eye. So I notice a little more supported now that, overall, when m ^ m remains quite similar to what you just read.
Now after more than 2 years of use, I continue to enjoy the D112 / C while ever cognizant of its default. Alternating with the Fireball V I is current as needed. When I need a more root, the D112 that gets stuck while in case of need a more modern sound, the FBV is perfect but forces me to use an adapter impedance (in fact it comes in contrast to standard MIC D112 released in Hi-Z) but I use the stuff for me amplify a guitarist, necessarily, it&#39;s a little tricky without adaptation.
From my point of view, the biggest flaw of D112 remains the slight propensity to larsenner. But as long as we remain in saturation "human" (a good shot at winning Tubescreamer 2/3 is more than enough for the Chicagoan), everything is fine and it is managed smoothly.

John62's review (This content has been automatically translated from French)

Superlux D112/C Harmonica Microphone
5
So a micro harmonic of small, relatively heavy, with an excellent finish and a (long) cable armor. The volume knob is also developed. This is a machine independent high, so it connects without problems on the amp and the sound of scratching may be clear or saturated to the taste of the user. Can be a bit too saturated for some ...

I've had three months, what I like is the power output and it's close to that obtained with a "green bullet". The value for money is excellent, I would do this choice in the future.

hecel's review (This content has been automatically translated from French)

Price / quality: unfortunately there is no miracle, sold around 50 euros it is bad, feeble and favoring the treble, it has the look and feel for him.

having bought just out of curiosity (I am a collector of vintage harmonica microphone), I returned to the seller.