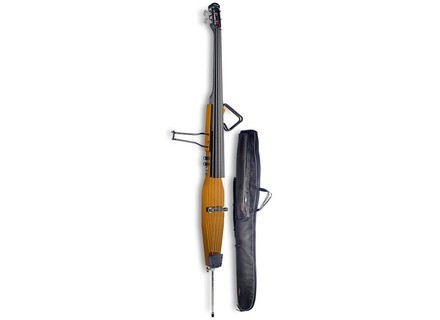 Stagg EDB 3/4 Electric Upright Bass; transparent yellow finish; 3/4 size (same as standard upright); 42' scale. Includes a headphone out 1/8' jack and a CD in 1/8' jack to allow practice long with recordings. Controls are volume and Sub-bass, which is a bass boost control. Piezo bridge pickup. Strings are standard 3/4 size upright strings. 1/4 output jack to amplifier. Solid maple body; neck might be some kind of composite -- it's hard to tell.

I purchased this instrument used from EBay in November 2009 to use in acoustic settings in my church band. I previously owned the NS Design WAV but sold it because I was not using it enough. Sure enough, not long after it sold, I found I'd need an EUB. Doh! I paid $399 with shipping and a fiberglass German bow was include in the price.

To me, the Stagg sounds more like a 'real' upright bass than the NS Design did. It's hard to describe, but it sounds 'woodier' and has more 'mwah' than the NS, even though it has a slab body. I like that the Stagg has a wire hip brace that allows you to hold the bass away from you while playing, and also that it has an endpin, which allows you to move while playing. There's also a plug-in wireframe for the treble side of the bass that allows someone used to playing upright a reference point for where to switch to 'thumb' position. Since I'm not really an upright player, this doesn't bother me because I don't use thumb position. But it is a selling point for many upright players looking to move to EUB. I also like the larger, open tuning gears as opposed to the NS closed. Gotoh bass guitar type tuners. (See my review of the NS here on MGR to see why I don't like Gotohs on an upright.)

The piezo pickup system is very sensitive and makes the entire body of the bass microphonic -- it picks up noises when anything hits the body -- a cord, a gnat, you name it. Stagg calls it 'noiseless,' and it may be electronically, but it picks up too many superfluous souunds. I attempted to alleviate this by putting thin foam under the legs of the bridge, which is where the pickup poles sit, but the effect is minimal. The endpin also rattles in some positions, which is picked up and sent to the amp. I had read that there are shielding issues with the control cavity, which is unshielded, but my bass is quiet. Maybe that has been improved over the years by Stagg.

The Stagg is solidly built and the finish is very good. All components seem to be of good quality. Since this bass was purchased used, I'm not sure what strings are on it or if they are stock strings, but they sound good. The bass comes with a padded gigbag and, under normal handling, should stand up well.

Even at a normal price -- they sell new for anywhere from $449 to $629 -- Stagg offers a decent quality for not a lot of money. Workmanship is not as good at the ND Design WAV, but the NS costs $300 to $500 more. If you're looking to experiment with upright or want to play EUB only occasionally, Stagg offers an affordable, good-sounding instrument.

Pat.Rick's review (This content has been automatically translated from French)" Good to get started? but ... Bad, No more"

Stagg EDB-3/4
2
I use it for some years.
I try very rare model available, including Clevinger, obviously much better, but for a much better price too (much more expensive).
What I like is the price, which is a right place to start against low.
What I deplore is that the production is so bad, I ordered the council to send a large distance. Try it in the store before, and from the model try. It frieze at the top of the handle, and the situation is formal. Almost 50% have had problem with the key in the first box. Bb particularly.

I recommend an earlier custom shop that used purchase.

It is certain that I will not buy this bass, but if I had the opportunity. Because it is related to its price. Not terrible ... the bass Clevinger, Yamaha, and other Aria, are much better. The outfit is bizzard, well loins of true bass.
Did you find this review helpful?yesno
»

tilmanjulien@live.fr's review (This content has been automatically translated from French)" Nice"

Stagg EDB-3/4
4
I use it for a few months now ... This is the first and only model I tried, with Honey finish, it is fun to watch. It sounds pretty good even though we know in buying this kind of instrument, you do not buy a bass but the feeling of having a bass. Value / pretty decent price but a few problems though: I can not screw one of the supporting elements of the bass (which did not seem to really serve but good). As mentioned in other reviews, the headphone output spits. But otherwise, with octave and a good amp set properly, you get a cool sound quickly ... A buy to learn to play fretless and have a semblance of his bass ...
Did you find this review helpful?yesno
»

The sound is pretty bad, changing strings, it gets better a little with EQ, a good amp and a compressor that still manages a bit but it's still light years ahead of its d correct instrument.
You really feel like a toy, and yet, a toy of poor quality.

However, there has utilities this instrument:
- To start if you're not sure you want to pay the price of a real bass, but only if you're the type to have unfailing motivation, because it takes little pleasure to play with such a non-sound quality
- If you want to play at night cheap
- If you want to make the bass easy to travel cheap

in short, a very good quality / price but its a fun game and pretty bad report

Did you find this review helpful?yesno
»
Read the 14 user reviews on the Stagg EDB-3/4 »