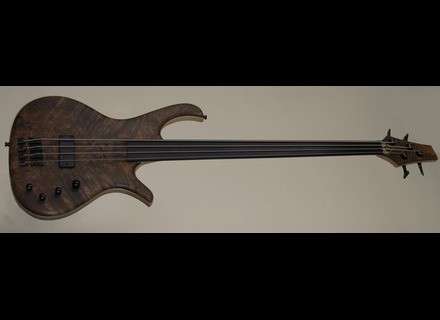 Benoit da Costa's review (This content has been automatically translated from French)" A true wonder!"

Human Base Jonas 4 Fretless
5
Low made in Germany, handmade.
I bought the version amaranth, natural color (purple, due to oxidation of the wood).
It exists in other versions for the table.
The handle cross-cutting of 24 positions, is equipped with an ebony fingerboard. A true marvel of perfection. Not a defect. Incredible sustain!
Scale: 34 "(864mm)
Pickups: Delano Soapbar
Electronics: HUMAN BASE
3-Band EQ (active / passive)
Bridge: Mono Rails HUMAN BASE
Tuners: HUMAN BASE

It is light enough for an instrument to sustain this.
The strings are super close race, but that's no problem! Incredible!
And easy access throughout the race.
The settings allow a wide range of sounds both active in liabilities.
Maybe just a damper on the possibilities of attacks, compared to a U.S. jazz bass. Still, it is very flexible. (I play on the Jazz Bass U.S. for years, and there I decided to part with it. Surely I'll buy a Jonas fretted later)

It is suitable for all styles. One could even believe, with some adjustments, we mean a fretted, so the accuracy is great!
I tested it on different Mark Bass, and frankly, they make a pair.
The manufacturer's choice not to place a single microphone, easel next to me was a little scared at first, but in fact it is no problem.

I did that for several days, but I think I have already exploited all, although I still control. JB I have fretted and fretless Deluxe U.S. for many years, I thought aquérir bass much more expensive, like Warwick Jack Bruce or Pi Moyon But the bass is a bit dull compared to Jonah. It makes me think of a Jazz Bass 62 I tried a few years ago (a real treat, but hard to find and expensive, passive and 20 frets).

Result: I pick up more! It is great!