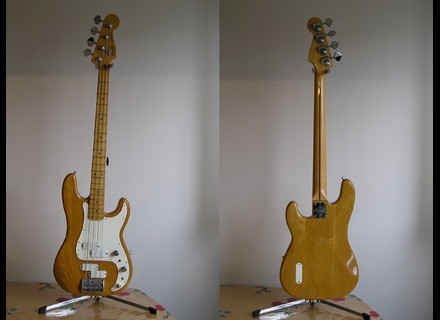 Fender Elite II Precision Bass
4
The Fender Precision Bass Elite II was manufactured for just a few years, the final years, I believe, of the period Fender spent under CBS control, something like 1982-1984. Mine is a 1983.

I'll just assume you know what a Precision Bass is. The Elite series was Fender's flagship line in the mid-eighties, and there were Elite Strats, Teles, and P-Basses, each of which had it's own differences from the standard, non-elite models.

The P-Bass Elite differed from the regular ol' P-Bass in that it had active pickups (powered by a 9v battery you access from the back), a high-mass bridge, and fine-tuning knobs in the bridge.

The P-Bass Elite II differed from the P-Bass Elite I in that it had two split-coil pickups rather than just one, as is common to most P-Basses. It also had a slightly different control layout in order to accommodate the second pickup.

The idea of the two pickup configuration was that people could decide between a normal P-Bass sound (neck pickup) a Jazz Bass sound (both pickups) or a treble-heavy almost guitar-like sound (bridge pickup).

The control configuration featured three knobs and two three-way toggle switches. Each pickup has independent volume, then there is a master tone control. The first toggle switch is a standard pickup selector switch (bridge, both, or neck). The other toggle switch is weirder. Essentially, it assigns the bass's single tone control to either or both pickups. So in theory you could have both pickups on, but turn the tone knob down on only one of them.

I shouldn't really say &quot;in theory&quot; because it actually works that way in practice, too. The only problem is there's not really much use for this much versatility.

The best thing about this bass is definitely the tone. It sounds amazing! The eighties Fenders have a bad reputation, because the company cut corners on many of their models at that time, but the whole idea of the Elite series is that they would still be offering some top-shelf product worthy of the Fender name. What's more, because these products are associated with the bad old says at Fender, you can usually get them for much less money then a worse-sounding, worse-playing seventies model.

Downside of the bass is: it weighs A TON! If you play it sitting down, or in the studio, no problem. If you play it standing up, be prepared to play for only an hour or so, or you'll have a bad back. I'm serious. I think the heaviness of the bass contributes to its awesome sound, but it's a trade-off, for sure.

Also, it's got a very eighties look to it. If that's your thing, cool, but this is not the kind of &quot;timeless&quot; design of the 1960s-style P-Bass.

The bridge pickup by itself doesn't really do anything for me, but the neck pickup and both pickups together make two different and equally wonderful sounds. I wouldn't really say that the two-pickups-together sound reminds me of a J-Bass, it's more like half-way between a P- and a J-Bass sound, but it's a great sound, and the neck pickup alone is one of the best P-Bass sounds out there. Full, rich, thumpy, thick, crisp, detailed, awesome. The on board preamp does wonders for the sound. So much better than any other post-1970 P-Bass I've played.

It's also quite playable. I'm more of a J-Bass fan when it comes to playability, but this has a nice, P-Bass style neck. Despite the awesome neck, I deduct a few points for playability because it's so heavy.

One last note, this bass stays in tune better than any other guitar or bass I've ever used. It will stay in tune for weeks, where my other bass has to be tuned every time I play it.

My philosophy on basses (and on guitars, too) is that you should have, at least, one Fender and one non-Fender instrument. This is my Fender bass (my other bass is a Ric) and it's the only one I think I'll ever need. It sounds enough like a J-Bass that it can get away with passing for when when it's playing with a full band. It's P-Bass sound is unreal.

For a long time, people basically thought of a P-Bass whenever they thought of an electric bass. If you've got one of those cool 1970s tube bass amps, chances are it was designed around the P-Bass sound. After I got my dream Ampeg rig, I realized that my Ric, as great as it was, was not the bass the amp was designed to compliment, and so I decided to buy a Fender. If I were rich I probably would have bought a mid-sixties J-Bass, but as it is I got this for less than 1K, and I'm 100% happy with it.