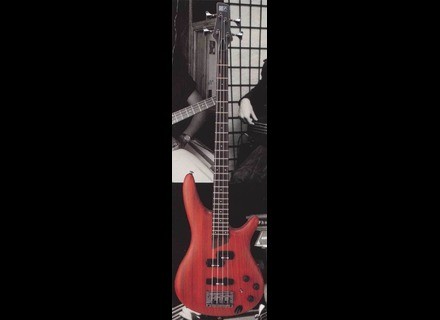 bmx-rider's review (This content has been automatically translated from French)

Ibanez SR1500
5
* Model padauk made in Japan
* Channel 24 cases in Wenge / Padouk approaching a kind of jazz from its size
* Two microphones IBZ United States: a side handle and an accuracy Jazz side easel
* Settings: volume, balance microphones, frequency variation. This bass has a simple but very interesting mail. By default, this bass has a "bump" in the media, a kind of boost on a predetermined frequency. Using the single button control (apart from the volume and balance) you can move the bump to the bass or treble to. However, this button does not just move the bump at the same time it slightly changes the signals or not by cutting certain frequencies. In use, it's very convenient to switch to slap her a more round and warm. Ultimately, this may seem a little barbaric and complex, but it's very easy to use ... slightly less in the design of electronics. Thank you for giving me Christian Noguera emerged diagram of this circuit. In addition, a 3-position switch lets you choose between "passive," an active, active 2. In fact, the bass is not really passive, the circuit is always powered, but say there is a position of "passive" or the knob does not work and two active positions with a different boost in the two cases.

* The neck is thin and fast, nickel for those who have small hands (38mm at nut and 62mm at the 24th fret)
* Access to treble is super easy
* The bass is very well balanced and the weight is therefore given the density of padouk ... but hey it's still very correct, it is only 4 strings
* This bass sounds terribly well, it's versatile (and easy to adjust), but it has a pretty clean sound unlike anyone, it sounds mediums, we like it or hate it is a matter of taste. However, the sound is very good, well-defined, not runny, I knew that it was purchased before the echoes from a friend who has now also

* This bass suits me perfectly, I can play as well as metal and disco thanks to the good efficiency of electronic
* I play a combo of David EDEN DC210XLT + 2 boxes of the same manufacturer D410T
* The typical sound of the electronic giant to me is in the active position, the micro scale in the middle (Precision + Jazz set) and frequencies in the far left (mid-high) ... I have also been installed this system on my Noguera Expression

* I bought this bass in October 2006 and I played it a lot
* It satisfies me greatly both on the violin as well on the medium, I have no negative point above, this BASSS was really very well designed
* I tried a bunch of models before this one: new series SDGR ibanez, fender Jazzbass and precision, yamaha TRB and attitude, musicman stingray, warwick streamer ...
* The price / quality ratio is very good since I bought it used, it must now put this model in his time (1990-1992) would change and there may be a difference. This bass was sold about 7500 francs (1145 euros) there are a bunch of years!
* I would do the same choice again in a heartbeat and now I have one I'm not ready to let go ... since the time that I wanted a

BooBass's review (This content has been automatically translated from French)" Amazing"

Ibanez SR1500
5
24 active low freights made in Japan.
Characteristics have been detailed.

The neck is fantastic as most instruments Ibanez! Access to the treble is great and the sound setting is easy. Minor defect if the 9V battery is HS and using an active position on the selector, it spits 20 to 40hz Junk ...

At ease in all styles, including his super natural grace to the quality of the wood. I play on an Ampeg or online live in a home studio and it's super clean! It happens to have a sound similar to a bass!

I use it in the studio, home studio and on stage since 1994! I had low first prize and his little sister SR 800. Otherwise, I was in the hands of Fender and Musicman. For his sleeve and his sound "acoustic" I do it again this choice without hesitation, this instrument fills me for 14 years and has not budged!