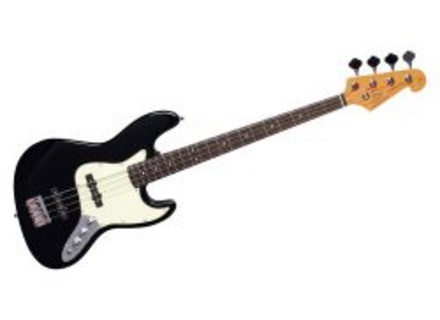 Found in almost every possible opinion on the net concerning this low: it goes "is the worst bass" to "compete with Fender."

There is a consensus that it is an alternative to Squier and a good basis for an upgrade. I was looking for a bass fiddle, paint, upgrade ... there was next to me, for € 80, the risk was not large.

The bass has a nice metallic paint, it looks good at first glance. At second glance, the ropes - at least mine - are not facing pads microphones, and dismantling the handle is locked with bits of plastic credit card: blah blah.

on the other hand, once stripped and sanded, the body turns into a beautiful alder.

Ergonomics: greater and less fitting that my Luthman Jazzette. Fairly light, less dense. At first glance this is the template of a "real" JB, the Jazzette being smaller. The handle seemed right and just. But I have not tested long in the state for the reasons explained in the next frame

Well, I've never played a Fender, but am still accustomed to good bass: I have a vintage Japanese Vantage and two Luthman: Jazzette Wave and fretless. I previously had a small Cort Action and Yamaha entry level which I forgot the number.

When I plugged this pretty red bassounette on my amp, well it did between "squeaker" and "plop plop" a bit like the idea we have of elastic strings stretched over a cardboard body. A very low level of output, no bass, no medium, no treble. Anything, anything.

I returned several times but not always the same. The strings that were on were low-end Warwick, but new. So I did not insist, as my project was DIY, I just disassembled.

The model I had in my hands, honestly despite all the rave reviews and demos you can find on the net, I could not the same advise a beginner. Cort or a small Yamaha is much better for what I have had the opportunity to play in the entry level.

Then it is possible that there is good and less good numbers in this series and I fell on a wrong number. Very close to original Fender design head indicates that it is the first, apparently there had been progress in quality SX since. Also possible with good strings ... I should try.

So if it is a low to play, start: try before with an experienced person. Otherwise, a Squier is probably more a quality monitoring.

Still, for a construction project Jazz Bass Custom, € 80 was a body, a handle, mechanical, so ...

huge surprise it sounds divinely we could believe in us so that the model is good, with such a low quality of sound and playability that price. it is incredible that Squier fails to reach that level. certainly of little aesthetic defects is still small I quibble, not its buzz is cool, impeccable microphones is really good stuff for a price that looks amazing aussi.moi who went back to play I immediately felt HandySheet above, a consultant for pro and amateur

2 months of use, but Squier and others take us for fool when voi have such low living SX

Chris Martins's review (This content has been automatically translated from French)

Sx Guitars SJB-62
5
Made in China, but with a real quality CONTRL it seems because there is no apparent dballage default. Nice photo in the top of a pommel Saddle super top makes it the low trs friendly. I took it in blue, but it exists also in red. 4 strings and 20 frets. 2 single coil pickups with a good output level, and its plutt friendly. No need to replace them, they all made their office. 2 volumes indpendants and Tone offers a potential classic of this kind of low.

Channel trs enjoyable, very easy to play, micro trs nice, low action easy to get, in short, a good JazzBass which is a standard. When it's what we want, no worries. That's what I was looking for, so no worries. lol

The low PSE relatively heavy, which is a good sign. In addition it rsons empty lot and results in a rich, full sound when amplified. Incidentally, although the output level consquent enough microphones, we did not blast or hum dplorer making fun.

It can rgler TRS deaf, almost round typ "bass" trs slamming the slap, so she did what should be a low ... The serious, but it remains prcise and clean. When it is saturated, it remains prcise. Trs nice. I use Live Toneport in UX8, the Joemeek pramplis OneQ and TwinQ and prampli LA610MkII Universal Audio. Also in the Blackheart amps for 1 / 4 watt to 15 watts of all tube, prvus for the guitar, but it works well to record trs. In any case, it is doing all that well.

I have been using low trs, trs customer but I am sries Agile AL3100 guitar (as a guitarist) and I knew that the report quality price of their little sisters in serious SX would be just as insolent . not a wolf and I end up with the quality of a Fender MIM and the United States between, roughly a Highway 1, therefore, more attractive, but 250 instead of 800 ... It can not refuse. With exprience, I'm going to order a copy of precision for the trouble ... I put over 10 simply because the price quality ratio makes the guitars and bass the most profitable on the market. Their strategies are of the same accabit, and copies of Les Pauls are awesome. Do not ct if you want a Jazz Bass, this would be a shame. Ah yes, the price of 250, customs fees and hard-case included ...

Johnny's review (This content has been automatically translated from French)

the handle is very pleasing to handle fender
form and copy of Fender JB, it is a bit heavy cage sound quality
ACCS Acute well in
the sound is the ultimate key: this bass sounds like a real JB (finally a us even when
in any case I'm staying on the c. .. the quality of many that the violin's sound, I buy them after you read a forum on a web page or 40 years guys did not say that the good of this low
in any case for what it is that bass sound reconcile myself with its liabilities: the real bass sound

I play both jazz, rock
as the top and say + that + well if I turn the volume pot of tone in one way or another I have as much treble as well as be serious

I purchased this bass there 3 / 4 months on ebay for $ 137 .... fdpin and I do not regret because I am a ruined and not especially important + I have a low quality as far as its level of quality stringed well multimdia the price I pay and I'll paris
in a few years this brand will find much that's today's Squiers made in Japan during the 80
one can read on this bass (40 pages) http://www.slappyto.net/Forum/Topic.aspx?id=18450