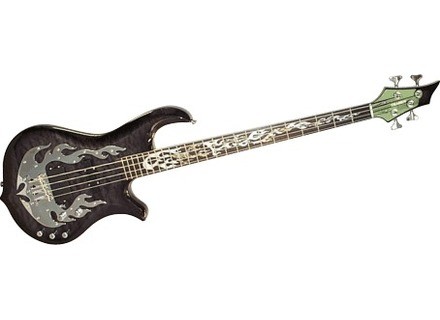 Traben Bass Company Phoenix 4
5
I spent the features already mentioned, but let me say that I changed the pickups and the preamp of origin for Bartolini
Note the great originality of the bridge

The handle is a highway! Although very long (the most beautiful effect for exposures of headbanging!), Slide your fingers gently around the neck. Access to Acute: No problemo! standing the low to mid-thigh, whether horizontal or vertical, the highs are still accessible.

The overall shape is pretty standard, but the bridge makes it unique. Chromium is very attractive to the scene. It is true that the handle looks fragile, but despite several rounds of truss rod, and use chaotic (pressure on the handle to the effects) of low, no sign of weakness is to be deplored. I would even say it is better to be flexible and do not break, rather than hard and breakin! (I mean the leg of the bass eh!). That said, I always carry a large flight case so I would not anticipate that she can bear to use ... extra-musical.

To get good sound? uh ... it does everything to the max? XD
Nan, his original base is already good. There also quite a boost of sound with incredible sustain (through the bridge). I

extreme metal (melodic death), so big sound: lots and lots of serious attack. Treble percussion for the passages in slap. It is ideally suited to my desires.

There is a huge sustain, very used to type the music notes or doom hard time. It is almost useless to put a compressor pedal behind.

I've had it now over 2 years, and the one I currently am a coward, I would resume the same!

I have tried many models before, and I had also not tested the Traben Phoenix (I've imported via the internet), but by testing the Traben Array I found the sound very ( very) interesting.

The small points to be considered because of the length of the handle:
- Strings: harder to find, take the "super long scale"
- The flight case: Besides having a long handle, the head is too long! Not easy to find a flight case so long, but if I could find, why not you?
These points are not to be defective, they contribute to the fact that low to the character, based, it does not fit the mold.

Value for money: to see when it will become unusable and I would do the price / year. XD
Otherwise, see the haircut of the bass, it should not be huge since it is difficult to find in France and the audience is hard to find for this bass.