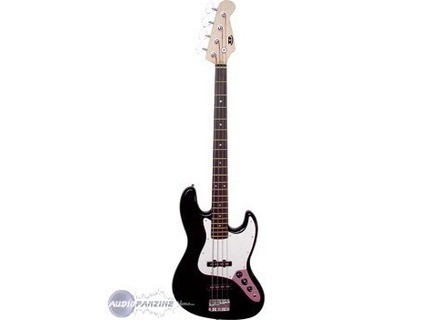 Jazz bass typical for the same time trying to have a Mexican Fender, apart from the name, you can not see gure difference (with the eye huh!).
Same weight, same color (but really), after a little more approndis examination, assemblage seems a little cheap.

Same comment as for the characteristics, it is a jazz bass (neck end weight "reasonable" -each his view, for me it is "normal for a low" -), unless you want to play not stop on the 20th frets, easy access to the desti- nations most recently boxes, ...

I find it very well balanced, say a perfect for me (I love the Thunderbird too ...)

Ah! here is the most important!

as said above, I tried at the same time a Mexican Fender and sincerely, the difference is minimal and its the price difference (between 400 and 500) is not justified not really, recess, I'm not talking about a deluxe american, vintage or whatever you want to allgrement Exceeds the 1000-2000 (and the rest) ...

I did that for 3 days, I played a little bit of everything (blues, rock, Mtal) and frankly, I am bluffing for 110 of its capabilities.
The strings origins are rotten and a change will be necessary for picky, but for beginners, it is exellent.

The sound is very fat and thick. Personally, I love the sustain from the mdiums by going to treble. To slap, it is far from a, but I must say that I am a quiche in the MATIRE ...

In hindsight, should have been a low of First I should have bought.
Remains to be seen over time, but for 110 Jazz bass that really made me scotch.

A very good comes into MATIRE for beginner in my opinion.

EDIT: after the test has a different than mine, I modre me: as my own sounds really good (for her eh price) as the other I tried made me wince at After 2 notes. I do not understand why, because I suppose it is manufactured in larger or smaller series and should therefore be all the same, but it is still as mine sounds pretty well, the one I tried vraimetn store was rotten.
Either.
I do not change my notes as I love mine, but feel free to test more effective if you take a ...
I also specified that my positive judgment takes into account its price, a little over 100 new (it is well worth the other chinoiserie around 200). Its price would see double-triple, it perderait canvas.
Voila, fauch advice to beginners or presss who do not want to wait to save to afford a semblance of Fender dream end

Comments are also on the HB audiofanzine and approaches the mine: exellent quality for the price!

EDIT 3: voila, 10 months later, I rachet Cort of a friend who knew what to do with, I have found a point of comparison: it is a little nearly the same quality except that Cort is solid wood (Agathis) and I think XP is chipboard.
Level sound quality, the XP is a tad below. As a, you have an idea of ​​what was worth.
Did you find this review helpful?yesno
»