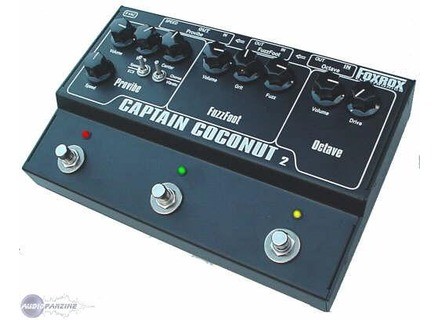 Foxrox Captain Coconut 2
5
This is a multi-effects pedal that has been discontinued. Unlike many of the other multi-effects pedals, this one is analog. It doesn't attempt to make all kinds of effects. Just tremolo, fuzz, and octave sounds. There are two 1/4" connections for each effect, which is cool, as you can bypass some of the sounds if you'd like. There are no attempts at MIDI or computer editing, which is great, in my opinion, as there is little to be said for such things. This is not a rackable unit as it is a pedal, albeit a big one.

This pedal is probably a little more difficult than most to use, but this is because it is really three effects units in one. These are all modeled off of the original pedals that they are named after, namely, the Provibe, the Fuzzfoot. There is also an octave pedal that is more akin to vintage Octave effects than the new Whammy-style ones. Thus it is more subtle than overt.
Dialing in the tones takes a little bit, as there are a lot of controls. On the provibe, there are four knobs (volume, width, center, speed). There are two switches (one switches between speed and ECS, which is difficult to explain without hearing it, and the other switches between chorus and vibrato, which is more obvious). The Fuzzfoot has three knobs (volume, grit, and fuzz). The octave portion of the pedal has two knobs, volume and drive. There is a switch for each "pedal", if you will.

I was pretty amazed at how good every effect on this pedalboard sounds. I think that the best sounding effect of the three is probably the provibe. It has a fantastic range for a vibrato pedal, not to mention that it doubles as a chorus. The best thing about this effect is its subtlety. There's no really annoying, obvious sounds to it, unless you set it that way. Thus it makes a great vibrato/chorus effect, which is rare nowadays. I think that in all honesty, this is the draw for most people who would buy this.
The fuzzfoot, however, is no joke either. It's a really fantastic sounding fuzz pedal. It has limited function, however it's great for kicking solos into high gear. I'd say it's a pretty solid fuzz overall, as good as many that I'd call my favorites.
The octave pedal is probably my least favorite of the three, as I rarely need it. It does sound good though, when I do. With these three effects combined, I really can only think that its a great pedal for people who'd like to get Hendrix-style tones, as it has two of his trademarks (tremolo and fuzz) as well as octave which he also used a lot.

This pedal was expensive even before it was discontinued, so it's going to be more expensive now. I assume that this is the reason the pedal was discontinued. If you are severely lacking in both your fuzz and vibrato effects, I would recommend this pedal very highly as it delivers both quite capably. It also has the added bonus of the octave effect, which can only make things cooler, really. If, however, you already have a great fuzz, or a great vibe, I'd have to say this probably isn't worth your time, as you can probably get the other two effects cheaper and have great pedals in both cases. I will say that this is probably the greatest multi-effect pedal I've played.
Did you find this review helpful?yesno
»