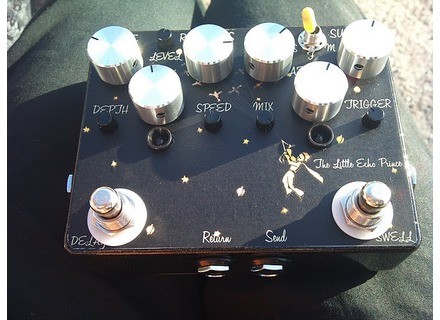 Jumikael's review (This content has been automatically translated from French)

VFE Pedals Echo Oche
5
This is a double pedal produced a time by Peter Rutter of VFE Pedals in a few copies, and is now available as a command "custom".
There is a delay store: the "Blueprint" and a Boss Slow Gear clone SG1: The Bumblebee.
Effects are analog and have many controls. An effects loop allows you to place each effect anywhere in the chain of effects.
It may be noted that the relay switch are switching, it's true bypass, you can even adjust the intensity of the LEDs through internal trimpot!

Full control! It's complete, but almost complex (not too still, I can assure you)

The delay:
- Time: control the delay time: 30-580m
- Mix: mix the dry and wet signal. Way to the left = pure signal, clockwise = signal + delay.
- Feedback-controls the amount of feedback in the delay circuit, and therefore the decay rate of repetition. This is one repetition to the onset of self-oscillation.
- Level: controls the volume of the pedal. Max, there are about 10dB of boost.
- Speed: control the speed of modulation. From about 0.1 s to 2s.
- Depth: controls the depth of modulation. The modulation effect can be disabled if this control is turned fully to the left. By combining the speed controls and deep, moving from a soft detuned chorus sounds adorable.
- Internal Controls: There is a potentiometer that controls the tone of the delay. By manipulating one can obtain a delay VERY clear (and annoying my point of view to die), or rather a very dark delay.
A second trimpot controls the intensity of the chorus and give it a pretty crazy character!

The Swell Boss SG1:
- Sustain: the amount of gain in the circuit of the compressor. More gain = more sustain.
- Attack speed of the effect of swell. Left = swell faster to the right = slower.
- Level: overall volume.
- Trigger: volume for the trip circuit of the effect. Correct adjustment is required otherwise swell will not fire.
- Mix: mixture swell the circuit and the circuit of the compressor. Way to the right, compressor = 100%, far left = 100% swell.
- S - F - M: toggles between three speed ranges for the swell.
There are also 3 internal trimpot that I will not venture to touch for now.

The delay is really nice, and uses the same chip that all delays PT2399 shops today.
I use it mostly with the sound as dark as possible. Very musical, breathless, with oscillation, and an opportunity to make a paste modulation.
The Swell is difficult to use at first, but once properly configured you can create beautiful and ethereal layers. I arrive at the best use by placing it before the preamp 'delay and after (say it avoids any problem of volume level).

The combination of these two effects (or even four if you count the modulation and compressor) makes sense!

A pedal surprisingly indispensable to some who like to create beautiful atmospheres, useless many others. The SG1 is in any case highly sought after, and this version is far superior to the original.

Note the craftsmanship of the builder. Finally, only the finish could be better considering the quality of the sticker used to the pedal.
I would do a similar choice easy. I think only the echo malekko 600 could make me change the delay