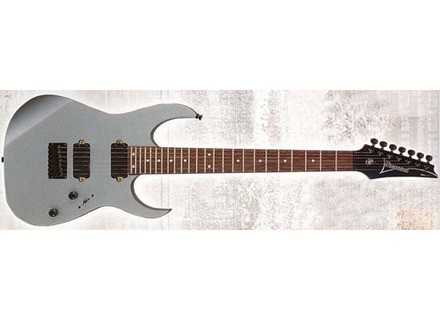 Ibanez RG7421XL
5
I purchased this guitar from www.MusiciansFriend.com for just under $600 and about $20 for S&H.

I purchased this guitar because I am a 7 string fanatic and I wanted to see how the longer scale held up to the other Ibanez 7 string models. I had heard that it's also a great guitar for those that tune down on the 7 string to such tunings as A or even G, both of which I use.

What I like most about this guitar is the way it feels. For those that play 7 strings, you know that it's a bit tough to make that first step from a 6 string. You always bump into the heavy string, your hands feel like they are playing on a fretboard that's the size of Texas.

However, this guitar compensates for the fretboard's extra width (side to side) by making sure it's extra thin (front to back). This is a great comfort for playing and it makes the whole process of playing a 7 string much easier. I also own an Ibanez AX 7 string and they are a lot thicker front to back than the RG series.

I also like the tuning posts on this guitar. In case you haven't seen it, this guitar features a fixed bridge, so that means no tremelo and no double locking tuning system. Some fixed bridge guitars don't have the tuning posts needed to hold the strings in tune for a long time. Again, the RG7421XL makes the cut with flying colors. I use a pretty thick string gauge (Ernie ball .58 power slinkys) and this guitar holds them and holds them well. With a quick adjustment of the truss rod, I had the guitar tuned 2 steps down to G and it was holding it all very well.

Not really much to gripe about with this guitar.

However, as a personal preference, I had a DiMarzio Blaze pickup installed because I like them a lot more than the Ibanez V8-7 pickups that come factory direct. The pickup cost me $60 and the installation was another $40. So all in all it's the same quality sound and body of this guitar's expensive big brother (RG1077XLRB) for a mere addition of $100. Most local music shops can do this simple task and I'm pretty sure Guitar Center has somebody on staff at most of thier stores who can do this.

If you also like a high quality pickup I would reccomend the DiMarzio Blaze (especially in the bridge) the DiMarzio PAF-7 or an EMG 707.

However, if you aren't a obsessive nut about sound like I am or don't have the means to get this sort of thing done, the guitar still sounds good the way it's made.

This guitar is great. Ibanez RG series feature the Wizard neck which is famous for how thin they are. This is a great feature considering the extra width needed by adding that extra string. I found that those who are accustomed to 7 strings will have no problem getting used to the longer scale (27") from the regular scale (25.5").

The extra length being only 1.5 inches isn't a big difference from the normal scale. However, it felt like there was more room in between the frets and that is a pretty nice feeling, especially for those that like to dance around in the higher frets.

Speaking of frets, this axe has 24 extra jumbo frets and that good old Wizard neck and curved area where the neck bolts on to the body allows for VERY comfortable playing in the high end. Some guitars have a bothersome block where the guitar bolts on or they simply dont have 24 frets at all. This guitar doesn't have either of those problems.

All in all, I say this axe is perfect for 7 stringers who tune down. I know that most musicians aren't made of gold and that the RG1077XL runs for over $1,000, so this guitar is a very sweet instrument until you start selling platinum records.

In order to make it a better sounding guitar, I would still advise the pickup upgrade, but it's not a seriopus need.

Also, due to the large scale, the only hard case that this guiatr will fit in is the Ibanez UV1000C case, which I got from MF for $130 and it is hands down the highest quality thing I have ever put a guitar in.

heads on fire's review"Very good guitar, not so great pickups."

Ibanez RG7421XL
4
This guitar was made in Japan between the years of 1999-2000. The body is Basswood, neck is maple with a bubinga stripe, 24 jumbo frets, rosewood fingerboard. The body has the all-access neck joint. Pickups are humbuckers, Ibanez V7 and V8 seven-string models. Hard-tail bridge with individual movable saddles. Black hardware, and the controls are a 5 way switch, volume, and tone.

This is a great-playing axe from Ibanez. One of my first exposures to the seven-string guitar was on this model, and I'm glad it was, because the neck is fantastic on this. The flatness of the neck and the shallowness of depth helps the hand get to the bottom string very easily. The neck joint helps the hand get all the way up to the 24th fret with no discomfort at all. Craftsmanship overall is great, too.

Here is where the guitar suffers. The pickups on this are just decent, but not that good. Clarity is a bit muddled, and the output is rather weak. This all is ok if your amp sound is always at 11 on the gain knob, but I like to play clean tones just as much, so this wasn't terribly inspiring. I also owned the RG7621 guitar before I tried a friend's RG7421, and that really is the only big difference - the 7621 pickups are fantastic, and the 7421 pickups are middle-of-the-road jobbers. I'd swap out for sure.

Pickups aside, this is still a nice instrument. A pickup trade would be in order, but that's the only downside on this guitar. They did make this guitar in some other colors that the 7621 didn't have, such as this grey nickel and the nice magenta Vampire Kiss - those are the more desirable ones, since seemingly everybody has a black Ibanez or two kicking around! They didn't make too many of these, so snag one up if you find it!
Did you find this review helpful?yesno
»