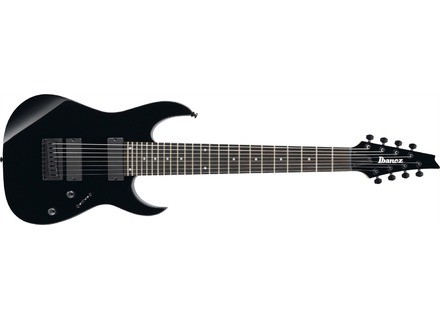 View all offers for Ibanez RG8 »

blackmetalpaulneedhelp's review (This content has been automatically translated from French)"Change! Change! as there will always qque thing?"

Output level adjustment is impeccable in its original carton.
No frizz is really hear once connected. If nothing serious to play.
The harmonic setting air nikel, nothing to redo (not like my Ibanez His 120 at the time).
string height, action is nikel coughed coughed too.

The handle is slim, what Ibanez style!
I went live &#39;from June to August strings and do not worry, in a week I was used to.
Maybe some work jump ropes will be again, but it&#39;s not the exercise that I hate the most.
Standing it falls into play not involved sitting no problem either.
Access to the frets is nikel until the 24th included.

I really had no problem since I used (1 and a half months). No bzut or blop
that arise, no friction or strings fart, etc ... I think this is the first guitar that I did not really need to "reprogram" (the others being a SA 120 that I could do almost retyped the action was so high, but now nikel, and ESP 401ex had two problems of three knobs ill-fitting).

1st; GROOOOOOS problem tone level. I do not know if it&#39;s mine (I have yet to find qqun complaining about that). When the tone is fully (and canaillou of metalheads that I will see quite play with the tone background) have meant a nasty a horror play. Simply turn the knob a quarter and adios ...
Finally if adios have changed the bridge pickup (like me, for a D-activator DImarZ example). I think this is the thing that struck me the most in the eyes skipped during the change of micro, kill that part of his / buzz disgusting.
So two possibilities: either it is the micro welds were crap (although unlikely), or it is the microphone itself is shit (! That&#39;s for sure), or (uh have said two hypotheses ...) is an electronic problem. This last hypothesis is unlikely, in the sense that I read on a forum that her big sister (RGA8) has an electronic rotten.

The neck pickup (neck) is for me better than the bridge (bridge). The sound is round without much flavor, but there is no terrible noise (at least ... sigh), it&#39;s something.

According to the microphones and noise, let&#39;s be clear this is a guitar to buy for modifications (mods). So two options: either you put Seymour Duncan Blackouts or EMG 808 (but then you have to treat rich), in this case it is active, ie: All electronics are bazardée, so more of problem buzz, or you put liabilities (poor?? you said poor??) and in this case (which is mine) y &#39;will probably a little éléc to change. I would add one later when I have done that.

For her it is a 8 strings, but it is quite soft and round with the neck pickup. The other you forget ...

I play with a rocktron chameleon, a power amp 2X50 Hugues and Kettner, the baffle is a V30 in a 2X12 of German site.
without changing the micro is not really burst on the distortion, there&#39;s opportunity to qque
simpa stuff, but nothing really hoped to use in rehearsal, let alone in the studio.
With software like guitar rig, ca fared a little better but still nothing great though.
Badant most is that it is the last two strings are harder to ring, it&#39;s going the other. Yet it is a little to the ropes where I bought boudiou of boudiou.

I have put my D-activator of Taleur so I&#39;ll be brief, knowing that I am an interstellar shit zik, whenever I change the matoss or that I have a new thing I put in for ages m &#39;use it properly (vade retro Plug&#39;n&#39;play).
First remark anyway. The dégeu and slightly attenuated the race buzz tone knob. That is to say, it is always present in the same strength, but I have to turn the tone less to do is steer. Which is important since I love to me this background tone eh! Eh!
The sound is more accurate, less messy. After compared cash in two minutes, I still feel that the neck pickup and the d-activator with a bit the same level I would not say which I prefer. Then I think it can come from two things: either it is not following behind matoss and makes no shades. In this case a passage by software should show a little more of dimarzienne beast. Either passive pickups this is uh .... I forgot what I wanted to say but you understood what (pk beuheuheu not Seymour Duncan Blackouts mômannnnnnn pkkkkkkk!). It is true that I am not a big fan of what a priori.
But then over time we&#39;ll see.

I would do an edit when I have done comparisons qques further and serious.

I&#39;ve had a month and a half. Not used extensively, I have my 401EX ESP for that. I expected change pickups, I made it an hour. So I would do edit for those interested.
Otherwise the possible mods this guitar, there&#39;s qques sites that already speaks English with a very good sevenstrings.org: https://www.sevenstring.org/forum/extended-range-guitars/220004-let- RG8-mods-begin.html

price / quality ratio, I do not know. The real trick would be to make a comparison with the 458 mods RK BK Harley Benton, which is damn cheaper. Note to those who want to try.

Anyway, I hope so it will help in qquns. If you have any questions, leave me a message on audiofanzine. I think I&#39;m quite the change so we&#39;ll see.

Published on 12/05/12
Ibanez launches a new 8-string guitar in its RG Fixed series, available in a white or black finish.