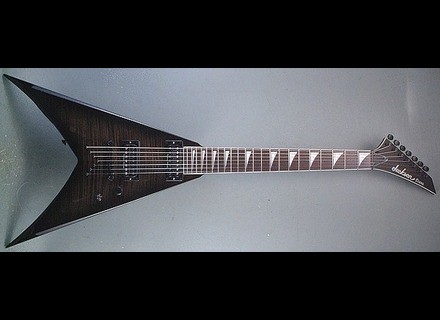 Jackson Stars King V KV7
4
The KV guitars are the mack daddies of the V work. You have these super pointy ends that helped inspire a huge trend in the metal scene. I actually don't know the body wood on this (aside from the flame maple top), but it had a maple neck, a rosewood fretboard, 22 jumbo frets, sharkfin inlays, two humbuckers, a hard tail bridge, one volume and a three way switch.

The guitar was very solid. The fretwork was decent, but it could have been done a bit better. I noticed that the frets weren't perfectly level in a few areas. This could be due to age, the wood shrinking/expanding or whatever. Either way, a nice fret level would have made this guitar play pretty nice. The neck was on the thinner side, but it wasn't super thin like Ibanez necks. The weight of it was nice, and it was fairly balanced, but the guitar was a huge pain to sit down with. The ends of the wings would always bang on things whenever I moved it around, and that got real annoying, real fast.

The guitar had EMGs routed into it. It had an 81-7 in the bridge and a 707 in the neck. The 81-7s is very much like the original 81. You have this super tight, bright and focused sound going on. It's great for death metal, as well as 80s metal, but it kinda lacks when it comes to other styles of music out there. The 707 in the neck is pretty good, and I was able to get a nice lead tone out of it. Clean tones were a bit sterile sounding, but that's just the nature of EMGs. If you want good clean tones, get a passive pickup instead, or maybe the EMG 60. That has a pretty good clean sound.

If you're looking for a seven string V shaped guitar, there are some decent ones on the market. This is one you'll probably want to check out, but I've only ever seen one for sale before, and it was this one. If you happen to run across one of these, I recommend possibly picking it up. They're very solid and sound pretty good.
Did you find this review helpful?yesno
»