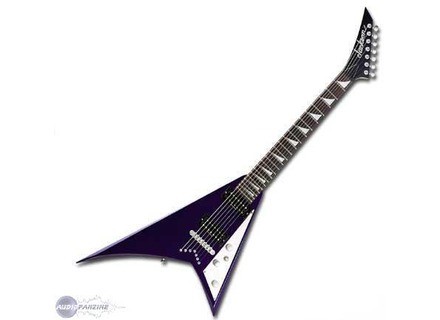 Jackson RR7R Rhoads Reverse
4
This is one of the few Jackson 7 string Vs ever made. You pretty much have this, the KV and the COW. There might be a few others in there, but I can't recall them off the top of my head. This guitar features a poplar (I believe) body, a maple bolt-on neck with a rosewood fretboard, reverse sharkfin inlays, reverse headstock, a hard tail bridge, 22 frets, two humbuckers, two volumes, one tone and a three way switch.

The guitar had some pretty good fretwork. The frets were nice a level, and the ends were rounded enough to where they don't slice your hand every time you move up and down the neck. The neck on this thing is actually fairly thin. It kinda reminded me of your standard Ibanez neck. If you like fatter necks, I would look at Schecters. The hard tail thing is cool, but I'm more of a floyd guy, to be honest. Sitting down with these guitars is always a bit of a challenge, but it's not as bad as the KV models, I've found. You kinda need to sit in the classical position and support the neck a bit, which leads me to the next issue I had with this. The guitar was a bit neck heavy, and it didn't work out too well playing with a strap in the normal position. I had to modify where the buttons were.

The guitar actually had a JB-7 and 59-7 swapped into it. The JB-7 is a lot like the original JB. You have that strong midrange grind going on, and it has quite a bit of output. However, it's not a super tight pickup. It works great for pretty much any genre you can think of. It's been successfully used from everything from jazz to death metal and everything in between. The 59-7 is, again, just like the six string counterpart. You have a very smooth and liquidy kind of tone, but it has just enough treble in the higher end to give you some bite and help you cut through the mix. I love it for leads and clean tones.

The guitar is put together nicely, and they're very solid sounding overall. If you happen to run across one, I recommend checking it out. If it didn't have the neck dive issue, I probably still would have had this guitar. However, I just couldn't deal with always supporting the neck on this. It was as if I was playing an SG or something.
Did you find this review helpful?yesno
»