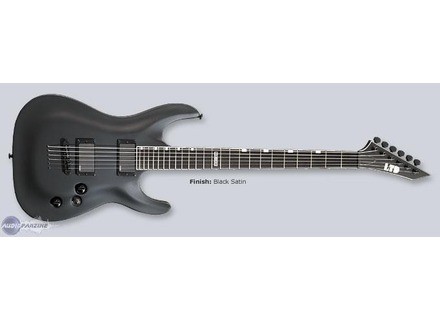 MHB-400, Electric solidbody baritone or 7/8 string guitar from LTD in the Baritone series.

nefas's review (This content has been automatically translated from French)

LTD MHB-400
5
_Guitare Baritone (tuning in Si), cut ESP Horizon, like all the LTD is made in Korea.
_Corps Handle and Rabl.
_24 Frets, shooting 10/56 GHS, pitch 27 ", with a microwave bridge and a cot EMG81 EMG85 cot set.
Gotoh Tune o Matic _Chevalet / stringthru (strings across the neck for better sustain), nut compensil is not right, for better accuracy of the notes).
_A Volume, one tone and a three slecteur position.
_Manche Supposedly driver (neck thru body) but in fact it is glued to the back of the guitar it looks like it's driver but when I disassemble the neck pickup, I saw it silent al which prevents him not to have a long sustain even when, but know.

_Manche Very enjoyable set from the fact that the paint is matte (black) it hangs a bit but I think that after a month or two it will be smooth and glide better.
_L'accs The fever is exellent, as a result of imitation of the handle driver accssibles Most recent internship frets are even for those with small hands like mine, + p
_Elle Is balance, no plunging neck, her weight is reasonable, little trick teacher, as in the Horizon, is that there is no dfonce (chamfer) at of the forearm on the body but also I think we should get used to.

_Bon Achte is not a Baritone to use a tube of muscle, you'll understand that it is sized for your mtal moderne.Si you a fan of Meshuggah, Strapping Young Lad, Fear Factory, Korn etc ... it has for you in the faut.Accordez If, in the same or Sol, has still playable without feeling string chewing gum strips that any note.
_I Pramp played on a lamp, lamp power amp and speaker while Marshall and sounds monstrously well ;+)))
_Du That the body is not in the saddle and mahogany, the lack of a small chest (lump in the lowest mdiums) my taste but is compensated by an exellent (super) edge in the big sound satur.Peut EMG81-be change to a Seymour Duncan in a slightly more round.
As for the clear sound, it sounds trs well, with bright highs, good bass mdiums and not intrusive at all despite the tuning, although balance in short, a rgal .
The neck pickup too, offer beautiful sounds in trs clean sounds as well as saturated but rather Reserved solos for my taste.

Cel is three weeks that I have and I rgale day by day, to spend an agreement on the non-Baritone, Baritone a true (always given in LA) is the big claque.Les riffs jerks come out ten times better, the agreement would better sustain better etc ...
Prior to the C475 I had a Charvel (basswood), which offered me more safe, with the same microphone, but the playability is not gal.Je have compared a non Baritone ESP Horizon the pleasure of the game is almost the same (even for one more when the Horizon) but still this lack of safe for LTD, due to the fact that ESP is mahogany table Rabl.
Qualitprix (900) is a trs good guitar, is impeccable finiton there is nothing wrong except that it is sold for a "neck-through", then that it did not.
Being a fan of sounds with a max safe, I might be Sparer for me to turn to the same MODEL but mahogany, the ESP Ltd. Vb-400 Baritone but not without regret, because as I prcisais the above, it is a rgal to play with this guitar.
(Said on 13/11/07) Since I made the VB400 and pure noise I prfrai the MHb-400B, the Viper has a more severe course, but also more dull, too bad.
Did you find this review helpful?yesno
»

PierLCD's review (This content has been automatically translated from French)

LTD MHB-400
4
The characteristics are well described in the previous opinion, not much to add.

Note however that the configuration micro-architecture is classical (quasi-extended to the whole range LTD and other brands too), the personality of the guitar is not more than that stated. It might be nice to have an EMG 89 instead of 85 in the neck position to expand the possibilities of the guitar ... or it might be nice to offer other configs (Di Marzio, Seymour Duncan ...), story stand out from the competition and the opportunity to seek out his cannon HIS today.

Level knobs, there is the bare minimum: 3 positions, 1 volume, 1 tone. For my part, I would have liked a tone knob further, and I think the selection switch microphone is not positioned optimally - to understand it a little difficult to change microphone during a song.

Black satin finish is nice, but really hard to find someone who can say how clean this type of varnish (conventional products like those of Dunlop tend to lubricate the polish). For my part, wipe with a cloth moistened with water or rubbing alcohol, it works pretty well, except in places where contacts are frequent, as the area where we put the forearm or the neck . There, the varnish becomes brilliant.

Small weak point: electronic level, I had to change the jack socket after a year (the sake of contact with the air, yet it&#39;s switchcraft original!) And a knob that crachouillé for a while . Nothing serious or crippling it!

In summary: I have this guitar for 2 years except traces of normal aging (varnish shining, bad hardware that supports palms wet ...), the guitar is still in very good condition, the handle does not moved, and regular meetings with the cosmetic condition is also very good.

Last little rant: while other manufacturers offer, shame didn&#39;t get to strap-locks as standard but the anchorages do not inspire more confidence than that.

A guitar with classic features but with a very decent finish for this price range. Compared to my previous guitar so (22 frets, Duncan Designed pickups, bolt-on neck with rosewood key coarse points plastoc for benchmarks, etc., all at a price substantially equivalent), I got thinking that manufacturing in Korea in 10 years had done all the same sacred progress ...

Comfort level, the handle is very nice, thin profile U to the junction with the body, which has good easy access to cutting treble.
Used to play the 6 strings and low tunings adept (if standard), I found myself still go wrong on a 7 string. The choice of a baritone guitar seemed wise, I am not mistaken.

Only difference: the rise of origin 13/17/26/36/46/58, the tuning of Si because the voltage is equivalent to a standard guitar, after the G string (or rather therefore Re) spun ask work well for the paws to bend easily ... 2-tone

I was not bothered by the lack of chamfer on the table to the forearm, because I was playing earlier on a Randy Rhoads. Those familiar with Strats will be more hungry.

At equilibrium, no hassle note, unlike the Viper baritone whose head has a tendency to dive. The weight is reasonable, we do not flinguée shoulder at the end.

I have not checked if the handle was stuck or passing through, however, regardless of the assembly, the sustain is very good, even without plugging the guitar, also the fact that the strings through the body.

The handle is solid (due to a tuning fork lying?): He has not changed, no problem "plank" to date, or due to poor adjustment of the bridge when changing strings. Encouraging sign in terms of tuning: the cold, the guitar is out of tune, but it is uniform on all strings and less than 1 / 4 tone.
A little adjustment and a small 1 / 4 of an hour of play to heat the handle, turn the mechanical one last time, and it is quiet for the duration of the concert or repeated.

Solid, simple, nice, that sounds good (I return later): I like everything!

This is not the guitar of the century, but I find here also good value for money.

I passed a ValveKing 212 to a Mesa Single Rectifier: day and night (yes, obviously ...).
Much in the first case, obviously it still sends as much in the second case we know what are the 2 buttons on the body and why it&#39;s not just 2 switches on / off.

The micro-type active EMG deliver a clean sound with a tight grain (well, once the string height set correctly). Amp with a high dynamic range, as in the case of the Rectifier, the tone control is very effective in defining the sound. It is dense and surgical, so no crystal or round (!), But the tone can play on the harmonic content delivered by the microphone, especially at low frequencies.

If that is subtle about amps like the VK with the Rectifier that allows for much more nuances of the game, as reactions to attacks on the strings so clearly understood.

Manche (85): clean sound for leads and creamy (great when you push the power section of the amp, rich in harmonics and prone to feedback generous but controllable!), Bridge (81) for rhythmic "cavalcadesques" sharp and full of grain.

Thank you again to pass the strings through-that enhance sustain, though taken up by the microphones, so well that sometimes it is a bit painful to hear the sharp resonances due to crashes, you know, those little bits of string after the bridge or the saddle ...

In summary: the active pickups can have a very clean sound that will be more malleable than the amp in front responding to the nuances of the game setup view, we remain in the classic in classic, but it sounds good , let this be.
There is a difference in tone, not huge, with the other home Baritone LTD Viper format; MHB-400 is a little clearer.

Guitar used regularly for 2 years, it quickly became my main guitar, which made me store my "to kill the mammoth guitar" (according to my z&#39;amis of Randy Rhoads) for the following reasons:
- Good ergonomics -> neck comfortable, healthy weight, balanced instrument
- Good finish that ages well, with routine maintenance
- Its "classic" but effective
- Compared to a standard guitar If granted, over "flap-flap" playing the strings
- Combination wood / bridge crossing / active pickups sound to deliver a good sustain in this price range.

Since I had moved to Paris to try this guitar, which proved untraceable, Cort had tested a "standard" and that famous baritone Ibanez, you see there with a Kiss-ian form that takes the dust there, in addition to a standard LTD. LTD-Cort is kiff kiff (*), except that there Y&#39;avait a huge gothic cross in the middle of the handle at Cort (yuck), the Ibanez does not appeal to me at all (and form).

After testing the LTD, a Teutonic order in and now my MHB (720 roros mmm. .. I think), which provides comfort to other similar LTD in this range. The Viper model, the other guitarist in my group has is also nice, but I like less (different profile of the handle, not the same access to acute, greater weight and head that tends to dive).

In this price range and for a baritone guitar, I&#39;m happy with my choice, I probably do it again. The Schecter they look nice too, but I do not know what it&#39;s worth ...

(*): Anecdote. I know it was in any store in the Rue de Douai, but as the salesman boasted of its characteristics Cort "for fun" (turn of micro metal cross in the middle of the race, electronics better than LTD ( ?)), as it was infoutu tell me what the installed mechanical shovel. His ultimate argument was watching my girlfriend, who was bored while I was copiously my test, saying: "it&#39;s pants eh!". I laugh still reviewing its head, to my girlfriend. ^ ^
Did you find this review helpful?yesno
»