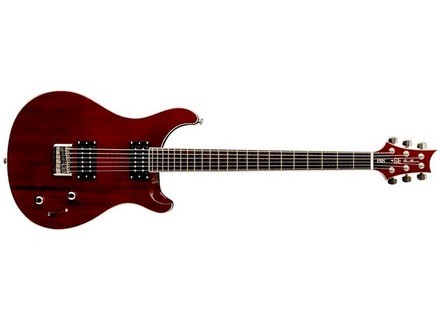 PRS SE Mike Mushok Baritone
4
This is a PRS SE series guitar, which I believe are made in Korea. It features a maple 27.7" baritone neck with 22 frets and a bound Ebony fretboard. The fret board has no inlays (save side dots). The body is the typical PRS double cut shape. Its made of Mahogany and also bound.

This guitar has 2 humbuckers, a master volume and master tone, and a 3 position blade switch.

The bridge is a hardtail strat style bridge, with the strings through the body.

The one I have experience with has the Silverburst finish, its seriously gorgeous.

This guitar is exceptionally well made when compared with other Korean guitars I've played, from the fret dressing to the finished everything is spot on. Even the factory setup is excellent. I was shocked.

The upper fret access is great and it has the typical PRS cutaway on the lower horn to make access even easier.

The guitar itself is really well balance, with a 27.7" scale I expect it to be neck heavy but it was not at all.

The neck is really nice, and its not one of the typical PRS profiles.

Stock this guitar is uninspiring to say the least. The stock bridge pickup is really dark and muddy, not at all the kind of pickup you want in a baritone guitar. The stock neck pickup is decent, just kind of flat sounding. Like its not bad, just nothing special.

That said, the quality of everything else in the guitar leads me to believe that with a pickup swap it could sound exceptional. It is a very well made guitar.

The only mark against this guitar is the pickups. They are a bland, muddy, poor excuse for pickups. Everything else is excellent though. The factory setup was amazing, super low action with no buzz, the finish is flawless, and the hardware is solid. At about $625 new its a great deal, even with the need for new pickups.

If you're in the market for a great looking and playing Baritone I would highly recommend this one. Drop a couple extra dollars on decent pickups and you have an excellent guitar for well under $800 new. That is a great deal, especially considering its one of the few midgrade baritone guitars out there.
Did you find this review helpful?yesno
»

The best is to go on the site prs ask!

I took him to my luthier who has partially disassemble and found that the quality was beautiful and well appointment.
He first look to see if the handle semi silent through al and indeed c'tait OK. So I'm used Sustain issue!

The knobs are very good quality set of resistance from a chapter on the tonal quality luthier I quickly change, which will influence to inflate my knob in shade but it's a good dtails which has a very small importance.

And especially the quality of ebony on a skyscraper 600 euros!

The finish is very good and finally we note that unlike some well-known brand that PRS also treats its less prestigious models. In short, everything exudes confidence.

And more served in a deluxe quality tui! Class!

Nothing that these points justify a report incredible quality.

First contact is very satisfactory despite the 12-62 tie strings a little too big for me but after 2 days I got used to it. His question, then it's the heavy. Branch on my fireball, saturation is hot, and naturally dvastatrice compress. Indeed, alnico pickups (I think) are there for something. Also, the sounds are clear ... beautiful.
Although the handle is relatively large (I have small hands), the handle is a highway.
I enjoy all the above questions sound microphone positioning. Frankly for the price I believe it.
Despite a plastic nut and the most common: Mechanical, the agreement is very good APRS same standards of bends.
Those looking for a baritone, will try this model. One recognizes immediately the grain Mike Mushok (Staind guitarist).
Even when I made changes to my luthier order to allow a more perfect guitar (including anchors, j'aiopt for the 12-58)!

&nbsp;Frankly, for 600 euros I do not see any disadvantages. Oh yes, after several weeks of use, I will change the pickups to my taste that does not sound like I would. I think to add an SH SH 6 or 8 ...&nbsp;
Let's be clear, the time o the great standards of gratounette (fender, gibson and others) that make you dbourser + EUR 1000 for a minimum of quality and this one is same o not the appointment, you have the quality of a PRS for a report quality unbeatable price. Exudes confidence. has been a while since I did not put his hand on a guitar like more of the guitars are passs 200 2500 euros in my hands.

'll At least try it!

Kimo.
EDIT: in retrospect the microphones bring reveal origins of "hollow" and DNU personality despite a gain of output consquent. I did install a neck pickup and a '59 SH1 SH6 at the bridge. I expect the home rcuprer UNESCORecords my luthier for my opinion on this fabulous guitar