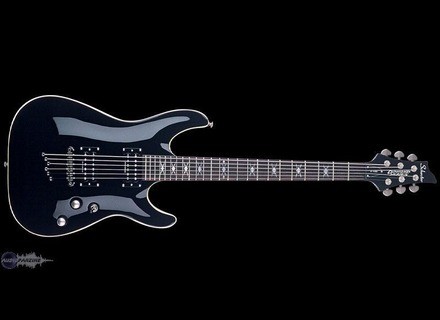 Mahogany body, neck and al chubby mahogany, 24 frets, rosewood fingerboard. Reprinted tribal perloid. The wood of the key is finally foul: When I bought this scraper, key silent bright enough. And she also left a lot of traces on noirtres fingertips. At first string change, I d have a good stroke of sandpaper to DGIG all a. .. mouaif ... not cool ... the grain of the Rosewood is marked and dug trs not smooth at all, trs far from what I have on my other guitars, which are not the ultra high end.

Plastoc nut in black.
Net cash on crme, everything else is shiny black.

Two humbuckers Duncan Designed HB 102 (the copy of SH4B and SH2N). Mouaif. Dtail sad: removing and replacing the pickups, I saw the quality of finish of the indoor dfonces. B'en is the cata: dfonce in the neck, a big blob of glue Scheer, really ugly. At least with a Bolt or a neck-it was not that kind of surprise. And dfonces extrment are deep, it's amazing.

Getting Started:
It is quite lgre and balance.
There is a nice dcoupe stomach, no dcoupe to the forearm. I had not used, it is.
The junction sleeve body reminds me that of a Les Paul, something really beautiful or not trs practice. Moreover, Access in fever is not gnial. Kind of like a scratching Bolt not sculpt with the heel (Fender, what!).

Added 22/07/04: Has the heel Fully revised the MODELS 2004 (The series Blackjack) and looks almost like that of the neck-in MODELS.

The handle is really round, pais, the key is flat, adding that pulling the strings of a strong enough, and that's a guitar that will take time to let it go. It's not really my thing, this round, actually. At the time, it is believed that a going to be fine, but in fact my hand tired Pitit trs BChE fast on this!

Otherwise, pass this problem, b'en sound is not too dgueu empty, the sound is not bad, quite brilliant (and yet the strings are not new).

It is a baritone, agreement BEADF # B. This is serious. Yes, it's serious.
Usual place in my rig (Mesa TriAxis / 2:90, G Major, Engl 212V), a scraper, a tow. A real fuel that stuff. Serious and slightly runny. The original pickups are more versatile than prvu (thanks especially to split), and less ridiculous than the EMG Hz H4, for example. But then, as usual, I made my class whore and have replaced with DiMarzio DP193 Air Norton in neck and bridge in DropSonic DP207. The sound is no violent change. If the clean sounds are really better (neck position, and position intermdiaires split).
In a saturated bridge in itself sends a tendency tight ass nice, polite, manir. Roots less than the Duncan Design Dropsonic replaces ... mouaif.

In short, the sound is not the madness of forcment but sounds correctly.

I dtest really feeling his large pickaxe handle / rope standards. It must be a lack of habit, force play on Jackson and Lag in 09-46, 13-60 in a Schecter, a calm.

Frankly, has never become my main guitar.
The quality is not so that I gniale esprais. Good value, no more, I think.

It's really because I wanted a baritone really cheap. Ca or Jackson DK27. But Schecter had the advantage of the handle of Tonespro al. Mouaif. Especially with the key dirty (what ???), they fucked with the handle type baobab, and dtails finish.