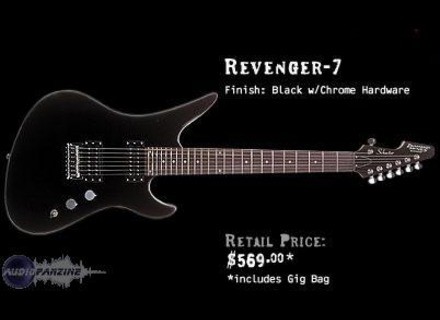 Schecter Revenger 7
4
I bought it from this dude off Ebay for $160. I tried a used one in GC in Queens, NY, and they wanted like 180 for one that would need a new input jack and switch. This one looked like new practically. He threw in a gig bag and cable.

Its got a deep growl when not plugged in, almost like a bass. I got it to get a down-tuned Fear Factory type sound. Its got really good tuning stability when tuned in standard B tuning. Its got cool stying, kinda like a strat but with a crazy batwing type upper horn. It has 6+1 headstock which isnt too common either. Its got a fender style fixed bridge. Thats good because im not crazy about tremolos.

The neck is fairly large. what do you want its a 7 string. It is also fairly large and heavy. This isnt neccessarily a bad thing. Also, could probably use new pickups.

Its probably built alot tougher than ill ever need. However, i dont think it is that old, and the frets are already worn fairly deeply on the bass string side. It doesnt say where it was made, so im guessing korea.

It was pretty much an impulse purchase, but one im glad i made. Good entry level 7 string.