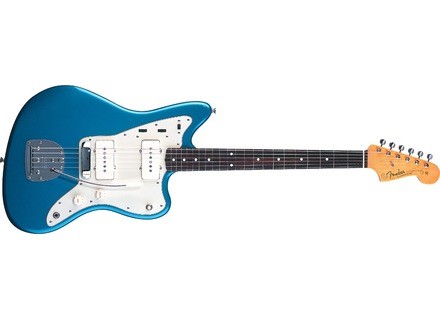 All user reviews for the Fender American Vintage '62 Jazzmaster

Average Score:4.8( 4.8/5 based on 6 reviews )
Not satisfied with those reviews?
Our members also liked:

Fender American Vintage '62 Jazzmaster
Afien a wanted notice, I hope he has at least a beginning of answer.
I have not used for a long time-but not because it is a bad guitar, far from it.
I owned a Japanese Jazzmaster, dating 90.je years'm a fan of sonic youth and surf music, and indeed the experimental side of this instrument is undeniable. also with a Gibson SG, she took me to other horizon. Moreover, there are compos ON WHICH she has been indispensable.
for the reissue of '62, finishing, and sunburst case, nothing to say. microphones have more fishing than my old Japanese model, but with the pots volume, we can calm the game without problem, and clean sounds are beautiful, very rounded on the micro manche.mais distorted sounds are not left very fenderien obviously, (but not strat or tele) and sacrémment plush and with a good distortion, we can send serious (trash, I have not really tested on SansAmp in marshall and mesa, already, it sounds very heavy. electronics-is rather confusing at first, but we made it quite vite.le vibrato j'l'adore me some change the bridge, but personally it's part of its charm.

So far, no negative points, after it is personal, but the pitch of the handle is too long for me and relatively thin frets, and the rather impressive body accustomed to the gibson and gretsch me, I'm not viking.et for the biggest downside of the rates, but it, ca seems obvious and Southwestern release (I tried), is frankly not bad
in the end, if you can afford it, you can go without problem, it will only limits that we donne.et can not forget the original form of the instrument (very cool) After. if you can, always test the instrument
So since we note j'mettrai not a 10, let's go for an 8

Fender American Vintage '62 Jazzmaster
5
I have a Japanese model teenager.

The U.S. version is not really such.

American pick-ups are more cristalins, the handle longer and wider.

I got used to it and now I would not go back further back.

I love it. I did replace the bridge deck to a mustang and underwent a slight shime wood at the junction of the neck and body. The result is sparkling. What class, single character, a true vintage instrument improved.

The price is a bit much but hey, I can not do without.

I play the Doors, the Ventures, the Beatles, Sonic Youth's ... of contemporary music, rock.

baeryann's review (This content has been automatically translated from French)" captivating"

Fender American Vintage '62 Jazzmaster
5
I bought this guitar a month ago I played for several years had an ibanez saber series sa1220 but I was more attracted to a Fender Stratocaster, but I wanted one on the model chosen was unavailable and it's been a while I scratched eye on this (the Jazzmaster) and as I'm not the patient that I took. she's great as it is of course the double circuit of the microphone sound possibilities are multiplied is a guitar trying to get his own idea but you can play with the possible exception of the very very big sound and even c ' is to see. the least that the bridge but do not forget that the basis was for this guitar to play jazz is no bend (and it also comes with a set of strings a net flat ) in the end I changed the bridge is no longer mentioned. issue quality / price I paid 1858 euros and it is well worth the price especially since the included Fender brown vintage box I forgot to specify that my guitar is black. I regret the contrary is no more I play the more I fell in love whether saturated or clean sounds on covers of ACDC or better with a tube screamer is like killing a love I

Fender American Vintage '62 Jazzmaster
4
I've had two years I tried many different guitars I like the Gibson Les Paul, I am an inveterate fan, the Telecaster is an instrument that I really appreciate. I mainly play blues, rock 70's, and some Dark Wave (influence Joy Division, Cure ...) where she excels.
What I like most is the large number of sounds possible with the two tone circuit installed independent of origin. going from one to another by pressing the switch above the neck pickup ...
What I like least: the quality of the bridge, this guitar would have deserved a good Tune-o-matic (as on the Les Paul) and provided I think it would become my favorite guitar .... But the original version bridges are a rare imprecision, and jumping rope is often at the same time it participates in the charming sound of the beast. The Twang lover will get their money because it all contributes to the grain of the final instrument! It is a matter of taste.
Used on a site well known Japanese value for money is pretty good.
I would do anyway because that choice for me is a guitar that a aesthetic point of view and sound is unmistakable, a fan of the first hour of the Cure ... I filled in the near future I think the develop carbon bridges that better support the strings and bring a little more sutain.

jazzmaster's review (This content has been automatically translated from French)

Hyper guitar ergonomic handle, very comfortable.
Item negatives on the vintage touch in the case where we love the low action ...
As usual the bridge is original foul of instability if we get nothing. There are lots of solutions, it would seem that the best is the mastery bridge.

Unique sound:
The clean = Hot but clear, bright but full.
The crunch = bold or sharp depending on the position.
Disto = A mix between the edge of a tele and a fat OS.

I use it for 12 years. After several years of seasoning comfort and sound are no other skyscraper is over for me. It does not m'empche have fun with Les Paul, Tele, Start, Jag and even Ibanez, Jackson, but these are the adventures of an evening ...
This guitar is unique in every respect is the anti guitar plug 'n play is what makes it exciting or dtestable.
It would be simple enough to make it a Fender guitar as the major character and sound are l. There should be a U.S. version with a touch more flat, 22 frets and a mastery bridge. Meanwhile Christopher Huort the fact their place ...

Mr Fern's review (This content has been automatically translated from French)

Channel ultra comfort.
Acute attacks, but ok for what a Jazzmaster?
Ergonomics nickel, not guitar heavy for my taste, I'm used to so much worse ...
The sound is sublime guitar is versatile within the styles that suit him. But is, in my opinion, sublimely suitable to be diverted ...

This is the guitar of Surfing, the Garage, the noisy rock, later called Grunge it seems ... Ditto for the Hard Core old school, and of course the post-rock. Sonic Youth, Cure, Television, Nirvana, Godspeed YBE, Dinosaur Jr., My Bloody Valentine ... and many others are or lauded in their time.

Amp? Fender of course, me, a Vibrolux, Marshall, of Mesa, I opt for a Tremoverb without TREMO no salvation for me ... the Ampeg. What we want is so unique ...

I use Jazzmaster or Jaguar for 20 years so soon, I am an absolute fan ...

I love his look, his sound

I hate their noise and Bridge bridge like everyone else and the fact that on there Amerivan Vintage Fender have done nothing ... But that will change if you want it for cheap with a Mustang bridge ...

But otherwise, it comes in Flight luxury vintage type .... Sublime. The price? Buy it on E Bay or promotion if a bit expensive must admit. and there is the top.