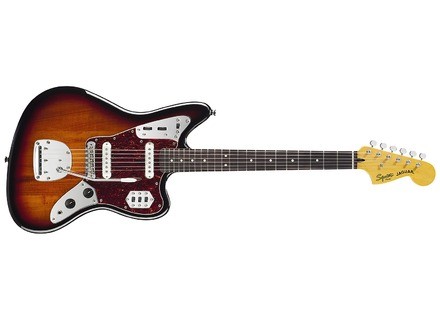 optofonik's review"That "Squier" logo is starting to become a point of pride."

Squier Vintage Modified Jaguar
4
I agree with most of the reviews praising this guitar.

You should play more than one to be sure you're getting the best of the lot but it shouldn't take long. I played three, they all played well, sounded good, looked good, and none had QC problems. The setups were typical factory setups but all such things being equal all three played well OOTB. As a result, my choice between the three was rendered arbitrary.

Like any mass produced guitar, the cost a set up is part of the drill. Get a bone nut while you're at it. Choose the strings of your choice then play the **** out of it. Rock that logo with pride because it says you got a real Jaguar (compare it to an original) without paying the luxury fee for a "Fender" logo.

After the brief initial "Squier series" offerings in the 80's, Squier quickly became synonymous with POS. Today, however, Squier is doing something right and slowly changing their reputation as a result.

As an aside, I also own a Squier '51 VM and it's an equally solid guitar OOTB.

Considering some of the criticisms leveled at the big two regarding QC on their instruments costing thousands, owning a "Squier" is becoming something of a statement. A bit two fingers in the air, if you will.
Did you find this review helpful?yesno
»

jaymes.moore's review"A magnificent guitar, but not straight out of the box..."

Squier Vintage Modified Jaguar
4
To really understand the appeal of this guitar, you have to know the story behind the Fender Jaguar. It has a unique and tumultuous past much like the underground musicians who have embraced it over the years. The Jag, as it is affectionately known, was introduced by Fender as the streamlined, retro-futuristic follow-up to the Jazzmaster and was marketed directly to the rising Surf Rock movement in the early 60s. While it enjoyed a great deal of success around this time, the rise of Blues and Classic Rock by the end of the 60s saw the Telecaster and the Stratocaster reclaim their thrones. As a result, resale values for the Jaguar and Jazzmaster plummeted as they were ultimately discontinued.

Falling out of favor with popular music, the Jag would have a resurgence in the late 70s and early 80s during the rise of Post-Punk. Artists like Jonny Marr and Rowland S. Howard made them their signature instruments. This trend continued in the late 80s and early 90s, as their lower prices attracted startup underground bands like Dinosaur Jr. and Sonic Youth, before ultimately become a defining instrument of Shoegaze by My Bloody Valentine. Since the turn of the century, it has continued to be an icon of Indie music with ever-growing popularity.

Because of the Jag's resurgence over the past two decades, vintage models have become as expensive as comparable Teles and Strats, whose "collector-item" status has stripped away much of that underground appeal. The Jag's pedigree has also been tampered with by the introduction of several modified variations over the last 10 years. Therefore, finding a vintage-spec, untouched Jaguar at a reasonable price that you wouldn't feel bad modifying has become impossibly rare.

This is the unique void that the Squier Vintage Modified Jaguar fulfills! Though built at lower-cost factories in Indonesia, the design and build diagrams seem to follow the vintage specs very accurately. As a result, many American Vintage Reissue parts made by Fender are directly swappable. Combined with good initial build quality, this means the Squier Jag is the perfect platform for customization and personalization.

So we know that this guitar is affordable, surprisingly well-made and easy to customize, but what about out of the box? This is the one caveat that might cause a lot of people to overlook these guitars. Firstly, the setup in most examples I've seen has been atrocious. While the frets seem to be finished nicely, the nut, bridge, neck relief and intonation should all be thoroughly addressed. In doing so, the ludicrously light .09 strings should be swapped for at least .11s (remember this is a short, 24" scale guitar, so don't hold back on loading up some heavier strings!). I replaced the strings immediately with D'Addario's Heavy-Top/Medium-Bottom strings (.11-.52), which are ideal if you occasionally play in drop tunings. I then replaced the bridge with a standard Fender Mustang bridge, which facilitated my ability to intonate the guitar properly. However, I ran into issues with the nut being too high. Surprisingly, it was not on the thicker lower strings that were a snug fit, but on the lighter, higher strings where their shouldn't have been an issue. I don't have access to proper nut files, so I'll have to one day take this to a luthier for proper adjustment. In the meantime, I have to endure a few sharp notes now and then when playing near the first and second frets. Also, because of the problem with the nut not being cut correctly, it is difficult to assess how well the tuning heads stay in tune.

Aside from the setup having to be readdressed, I found the pickups to be more than adequate. Sporting Seymour Duncan's name, these pickups are wound a little hotter than vintage spec but certainly have more life and character than comparable Japanese-made Fender Jaguars. They also sound more period-correct than their closest rivals, the Mexican-made Classic Player Jaguars. However, the controls and switches are certainly of lesser quality. The tone control for example on the rhythm circuit broke and spins freely, so that will need to be replaced. Being a project-guitar, I plan to replace most of the switches and knobs with AVRI components.

Like the Japanese-made Jags, the Squier also features the vintage floating tremolo in its original position. However, the Classic Player and the 50th Anniversary Jags have been altered and their tremolos have been moved closer to the bridge. This to me is the most crucial element of the Jaguar and ultimately the reason why I decided against the Classic Player series Jags. Because the pickups of the Jaguar are essentially Strat pickups with additional shielding, their signature sound comes more from their other design components, particularly the tremolo. Even when not in use, the distance between the bridge and the tremolo allows for immense string resonance, which is an effect that is dampened when the tremolo is moved closer to the bridge. This resonance is crucial as it gives the guitar a natural reverb that is essential for driving the splash of a Fender spring reverb in surf rock and for the expansive tone when combined with alternate tunings in shoegaze and indie rock.

With some adjustments made, the Jag is a breeze to play. The shorter scale makes it effortless to explore the fretboard and the pick-up circuit combinations allow for a variety of different tones. The upper rhythm section, with its warmer tone is perfect for vintage jazz sounds or as a compliment to it's more aggressive tones in a recording situation. The Lead Section will probably see the most mileage. The Neck PU is great for rhythm and blues lead and the pick-ups together have that signature, Strat-like sparkle with the added resonance of the tremolo. Combined with the mysterious third switch on the lead section controls, which actually triggers a capacitor that serves as a high-pass filter, you can achieve really crisp, sparkly chord voicings that are ideal when combined with spring reverb or modulation effects.

The bridge pick-up packs a more modern punch and can be used to great effect with overdriven riffs. The high-pass switch can also-really help clean up the low-end when using heavy distortion.

In any pickup configuration, the guitar responds equally well to riffing in unorthodox or dropped tunings.

The bottom line is that at this price-point, the Squier VM Jaguar is unbeatable. It may seem a profound statement, but from the point of view of a purist, it's closest competitor is the Fender American Vintage Reissue Jaguar, at 10x it's cost. The Classic Player Jags are heavily modified from the originals and the Japanese reissues are infamous for their anemic pickups and in both cases they are more than twice the price of the Squier. Ultimately, with some additional investment into upgraded components and a thorough setup, the Squier VM Jaguar is a magnificent guitar that is easily deserving of a Fender badge on its headstock.

Pros:
+Affordable Price
+Ability to easily upgrade components with those from other Fender Jaguar Models
+True to Vintage Spec Components and Design
+Surprisingly good build-quality and beautiful finish
+Great sounding pick-ups that are more than acceptable until a more substantial upgrade is made

Cons:
-Poor setup from the factory
-almost unusable vintage bridge that should be immediately replaced by a mustang bridge
-cheap, plastic electronic components that will likely break and need to be replaced
-no locking mechanism for the tremolo
-the "Squier" name on the headstock

Sethesh's review (This content has been automatically translated from French)" Good guitar for the price."

Squier Vintage Modified Jaguar
4
Bought in September 2012. So I use it for 08 months. Basically I was left to try Hagström Super Sweed and Custom 77 London Burning but I'm left with it, I was seduced by the sounds of this guitar.

I tried for comparison the Squier Jazzmaster, Squier Stratocaster in the same price range.

Its main features are: ease of play (round end and varnish with a good glide ... uncommon for the price), sound (very special microclimate that sound particularly good), good finish for less than 300 €, many settings (2 selector microphones, high-pass filter, tone, volume + particular mode for the neck pickup)

With the experience I would do this choice for its sound so special but I do not necessarily recommend it to a beginner.

doudou45240's review (This content has been automatically translated from French)" A dream. It is no longer a Squier"

Squier Vintage Modified Jaguar
5
I've had a few hours, after a day in a try in store.
I play for 40 years, and I've had, guitars. Currently a U.S. Strat and a Tele reissue, and ES335.
I tried this model, accompanying a friend to buy a Strat, I found it pretty, and here. I play Blues and times, it is versatile as desired. No need to lug around 36 guitars. Overdrive, reverb, a tube amp and voila.
The mechanics are correct, and vibrato too. But given its design, it is not made to be shot in both hands.
Pros: perceived quality (9/10), the speed of the handle to speed 61 cm (10/10) that she is most comfortable (modern C-shaped profile), the huge diversity of sounds with the double circuit mail as the old Fender (no breath, no rumble). (9/10), with the limits for pickups sound very saturated.
The - I do not see.
I would do without hesitation that choice, it is not the kind of purchase that ranks behind other guitars after a week, on the contrary.