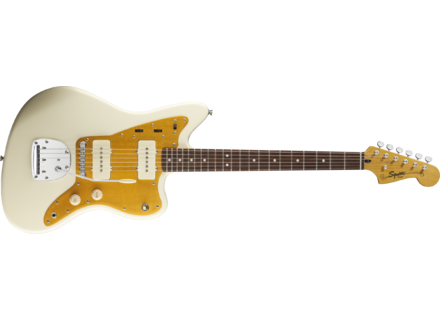 Riko42's review (This content has been automatically translated from French)" not bad at all!"

Squier J Mascis Jazzmaster
4
this is my first skyscraper style Jazzmaster and the sudden, I am far from disappointed with this model! good value for money!

the + look fabulous, nice handle, microphones with character, especially in the rock but also sounds great on clean. the guitar also happened pretty well set at the factory, something very rare in this price range!

the - holding not terrible agreement, if the vibrato is used it is downright carnage. microphones not cashing very hi-gain (random background noise ...) and finally, a few unpleasant Resonnances at the bridge.

Squier J Mascis Jazzmaster
5
I used since a month.
I love most: the improvements made by Mascis, solves problems related to Jazzmasters (lack of sustain, buzz), microphones between P90 and Jazzmaster, very rock, while keeping what one would expect of them.

I tried a bunch before cracking. This is a guitar that looks like a lot, but who has a lot of flaws.
- The squier vintage modified are very cheap, and even if they are very close to the original 1958, there would be too much work to make it so that they are cool.
- The fender japan: good, but rare to find, and quite expensive (700 €).
- The fender mex: the violin is cool, but seriously jazzmaster with humbuckers? Where are we going there?
- Fender us: 1800 €, still having problems with easels ...

(Yes, I really tried a package)

The Mascis an Adjusto-Matic bridge (a tune o matic, say) that hold the strings well, the bridge is closer thereby increasing the angle between it and the bridge was no longer sustain.
For € 425, it's great.
The neck is satin, like on some acoustics, it is not unpleasant, but it does not change anything special.
In contrast, jumbo frets gibson bring one side to the button in its playability

Sound: that of Mascis, it is the big rock (not metal) jazz (yes, a jazzmaster is made for it in the database!). It fits well also blues. In short, you can do everything except that which require very large power and precision!

Ps: no I do not work for Squier, I'm just convinced!

19 of 20 people found this review helpful