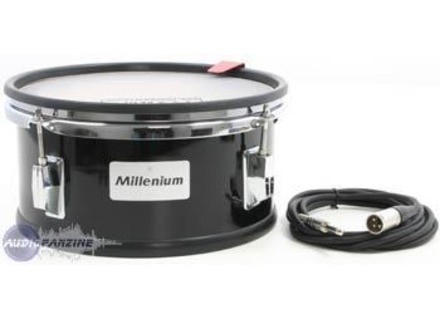 psantoni's review (This content has been automatically translated from French)

+ Mesh Heads of good quality is not the Roland but it is very close to an acoustic ...
+ The size of the box (12) that we feel very edge band.
+ The product is sturdy and solid, again, we say an acoustic drum.
+ The look, black very sober and styl ... (personal opinion)
+ The rim-shot
+ Prcis the sensor is not trops (if at all) to be rebound.
+ Compatible with Roland module, Yamaha.
+ Comes with XLR and jack rglage key for the detention of the skin

- The mesh skin bounced a little bit too, but it is the rgler trying ...
- Ben nothing

Excellent, no competitor in the walk (90 in Thoman).

- With the exprience, you do again this choice ...?

I am very so please for this product and I highly recommend all the world, really, eyes close ...

A +++
Did you find this review helpful?yesno
»

Domi0032's review (This content has been automatically translated from French)

Millenium PD-1012
4
Hello.
I have bought a used, very interesting practical point of view because the 12 "is very playable, it feels good and the skin responds quite well and easily.
By only 4 against the tension rods can not reach reach the quintessence of tension in the skin, six were welcome.
The dual-sensor is operational, no interference, but the strike has sometimes misfire! So, once bin quiet, I try to find a walkthrough, I use a Roland TD-3 module.
A counselor if low budget, especially as the was relatively robust, with an attached high-performance and reliable.
Did you find this review helpful?yesno
»

BuBuOne's review (This content has been automatically translated from French)

This is probably bi-sensor pads to look "GPs" cheapest. The dtection is correct, but very little homogne.

They raliss t from a tom (very low-end) to which was grafted a single sensor in the form of a box that collects on the skin and the edge. The sensor is located under the red plate (which is only there for the sensor being protected - remove it or paint it black, will have less weird).

Due to the presence of a sensor board, not at all dtection homogne. The sensitivity on the skin increases srieusement when approaching the sensor. On the rim sensor is the same battle.

To try the amliorer homognit I tried to work on stretching the skin, but the original skin seems a bit invalid: it keeps a look-soft elastic, which of the voltage. This skin is also very fragile, it has jump After a few weeks. I replaced by a skin replacement Roland, which makes the surface of the pad more rigid, with the lgre amlioration dtection. Once the skin disassemble, I used to sand a little corners of ft, which taient apparently a bit too sharp (Dchira potential source of skin).

To illustrate the low-end appearance, know that the sensitivity between my 2 pads Millennium PD-1010 varies significantly from one another - but the module can fix a.

I tried many other models sr. Mesh I have a PDX-8 and PD-125, both of Roland. The DP-125 is much better than the Millennium, but also more expensive. The PDX-8 is already more comparable because cheap (but smaller), and also with a sensor located on its side as it ragit this much better, and Manir homogne more.
Overall it is usable if it is to hit hard: the sensitivity rglerez you to easily reach the max. But if it comes to playing nuances, the wide disparity-detection on the playing surface can cause you some cool ...

Finally, the point FCHE: The system setting is really limited, it does not seem very solid and screw is so short that it does not dvisser enough for us to the install easily onto a rod rack Roland (who seems very standard). It is doable, but pnible when not used.

With exprience, I would look to possibly be a real ft tom, which I would install a skin mesh and is a trigger Roland clipper or a system that is home to capture.
Did you find this review helpful?yesno
»