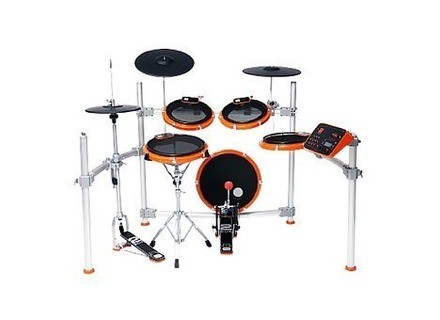 2box DrumIt Five MK2
Pros: the quality of the sounds housed within the brain are difficult to beat. Former Roland customer here. Playability is good too. Can use mesh, rubber, or real drum heads. Open sound source with company website offering periodical updates to sounds, features, and operating system. You can import your own .wav files and make your own sounds. It's a fraction of the cost of a flagship Roland kit yet in a sonic comparison, I'd be shocked if the Drumit did not prevail.

Cons: The rack system, while certainly adequate, does not denote a sense of professional gear. There seems to be a mismatch that could be sending a mixed message to consumers. The kit should scream "professional's choice" and is so to being worthy of just that. Cymbal triggering can be a bit fickle, especially the bell. No positional sensoring at this point. A choice of colors other than orange would most likely be welcomed. Headphone output is not nearly as hot as Roland modules.

Overall, I feel it's a big upgrade in many ways from my Roland kit. For the serious drummer who demands serious sounds, this kit should satisfy. A matchup of hardware to parallel what is likely to be the best sounding module available, would make this already superb kit the one to beat.

2box DrumIt Five MK2
5
I've been using it for a week, after having an Alesis DM10 module on an acoustic drum kit with mesh head.
I rediscovered electronic drums, with a sensitivity and a touchdown I could not have on my acoustic drumkit with triggers.
I tried before the Roland kits, but except for the ultra high-end which are 3 times more expensive than 2box, I found the sound unconvincing. Some of the 2box kits are really fabulous, just close your eyes and you will hear the real drumkit.


The features I like:
Plug and play, we rack mounts, pads, cymbals, plug and play module.
The only adjustment I made is the modification of the Xtalk cymables.
The basic kits provided are very good quality and do not necessarily require the modification to sound good.
The pedal hihat and bass drum provided. Well it's not the top gear, and more pro players change them, but they are fairly well made, with a special mention to the bass drum pedal, on which you can adjust the angle of the bat without changing the angle of the sole thing that can not be found on high-end pedal.
The possibility of these kits directly from a PC
The aesthetics a bit special (we like it or not this orange, I personally like it)

The features that I like:
The menu navigation module will have been improved.
Cymbals a little heavy to the touch
The mounting arm cymbals that can not adjust the position exactly as desired.


The report quality / price is really unbeatable.
I was looking for an electronic drum kit that is easy to use, with good quality sounds that do not necessarily crossing over each kit to change the sounds, this is exactly the product I needed. I did not need all the features that have little return on modules Roland / Yamaha / Alesis ... or the Positional Sensing.

Hervido's review (This content has been automatically translated from French)" It does!"

2box DrumIt Five MK2
5
How long you use it? About a year and a half

What is so special that you love the most, least?
The look, sound, touch, the gameplay ... I wanted an electronic drum so I can train without interfere, but with real drum sounds ... There, it is quite realistic (more so than you would find the same price in competition). All cymbals are multi-zone, all the toms have a detection of the rim, there is a real charley .... brief ca is closer to acoustic drums than anything I could try until then.
The bonus is the separate outputs, which I intend to use incésemment records!
NB I hesitated a lot before buying it because I had read bad reviews on this charley drumkit. I've decided that after having tried in stores. The charley in very well until recently, and it triggered the relaxation of the pedal. After searching a bit, I just physically re-set the cymbal to make it a little farther from the sensor in the open position, and in the module, I programmed the detection of closed position with the foot flat pedal (rather than heel lifted). For over problem .. a real treat!

What is so special that you like least?
The internal memory is limited to 4GB. It would have been nice to have a card reader for example to access more sounds, more of mp3 support etc..

Did you tried many other models before buying it? How would you rate the quality / price? With experience, you do again this choice? ...
I played before for about a year and a half and still plays occasionally on an equivalent TD12KX (purchased separately modulus, vh11, the barrels with mesh skin etc..) Who came back just cheaper. The Roland is also a good drumkit, but much less playable (fewer zones cymbals, no detection of rim on the toms, and a large hotspot in the middle of the snare drum that is personally what bothers me the most). I do not regret at all to be spent on 2box! It surpasses anything I've tried so far in store in the same price range. The only one that I liked is the MarkDrum YES1, I had the opportunity to try in a store. Loading time kits very long, otherwise very nice (I mean by that ca approximates the acoustic sound and playability, the qualities I look for. If you love the most electros kits or special effects, is Roland a better ...)

2box DrumIt Five MK2
5
4 months as I type on it. I tried a few times TD112KX (and some long time) I was facing a big dilemma because not possible to try the two in my Box lorraine deep .... and as my goal is uniqueent recording I took a 2 box because the sounds are more realistic (heard on the forum box unofficiel 2) and the possibility of building their own kits really interested me very well as the 8 output module for recording. This has ruled.

I do it again without hesitation that choice since it costs over 1500 euros less than the TD 12. It is true that the pedals are naz, but in the same price, what did you buy at least one or two multi-zone cymbals, double pedal and hi-hat foot of a real and even more ... and suddenly the TD 12 ends up far behind.

The real plus is that the sounds are so authentic that even an ear entrained would be difficult to differentiate with acoustic once everything is mixed. The module is fun and easy to access (the modulus of the TD 12 is bigger, more beautiful and lovely but its level is exceeded in my opinion)

I put 9 because the backgrounds are nazes pedal and cymbals three areas are too heavy to the touch. Everything else is the bomb and CC diameter toms and thus meet the acoustic codes of happiness next to the pots one person you may encounter elsewhere.
The module is compatible with all products and most of the Millennium Yamaha and Roland products. So no worries for evolution. T kits you can build a software provided on the site 2 box by plugging in your USB module at startup. And then you do what you want with the sounds of modules and those you have next. module has 100 kits on a 4 gigabyte SD card. We must fire the place to insert the kits you have installed.

Did you find this review helpful?yesno
»
Read the 5 user reviews on the 2box DrumIt Five MK2 »