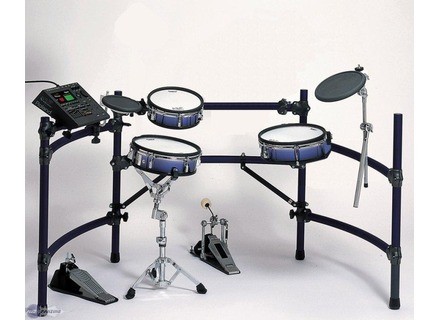 TD-10KB, Electronic Drum Kit from Roland in the TD series.

cariacou's review (This content has been automatically translated from French)

Roland TD-10KB
4
I used the Roland TD-6V for 6 months when I found a good deal on ebay.com (USA), unfortunately I had customs charges on it, so it came back around the same price .

has the ignition, I thought Ben would like, you pay a screen full of buttons, but the sounds are great.

Rhythm of the first but I did, I hallucinated: Sensitivity is just great! nothing to do, but then nothing to do with the TD6! frankly, it's night and day! The TD6 is the same all over the pad, there is just the volume that varies a bit, but it aléaoire: not really it depends how it hits.

with the TD10 is um, well as I can dream! we really feel that it also detects when you type near the edge ... .
I have a trick or haluciné is also the Ride: I had a CY-15R, but on the wholesale TD6 was 3 sounds that were unleashed: board, body, dome.

with the TD10, its just the whole cymbal lives: a ca every sound changes a bit, and the transition is very natural: the sounds from the edge and the body are.
level for money, this is the best I think. becaufe frankly, I do not see what could make TD20: o! (So ​​that it costs 3x more expensive).
something good is also the sound level of pads is done as a mixer. it annoyed me on the TD6 to hack for 5 minutes to reduce the sound of the bass drum.
sound settings seem fine too. in any case are excellent snare drum, good bass in the bass drum. against by the V-edit (adjust the depth of was ...) it's not the point I think. ca change almost nothing to the sound, and it was just a choice between "was long" "was normal" in order to be called V-edit, it should at least have a dozen lengths to adjust for the same sound.

I said that I have the expansion with (TDW-1), without whom the TD10 is meager (in particular, sounds, and positional sensing that is not on all pads (on the ride, c ' is heaven!).

So small inconvenience for my taste:
-Sounds: a better to have real acoustic
-Lowering the price of CY-15r: we can put in all the cymbals (and add the sounds of crash and bell bell charley)
-The screen is a little itty bitty: it is packed with information, to the point where sometimes it all vriament tiny pixelated everywhere. is that price, you could at least have a nice screen mobile phone: it costs them more than fifth.
-An equalizer for the entry in MIX (when I put my CD, I would like to increase the bass).
-50 Kits is not much for memory. I think we should be able to go up to 200-300 (even if it is not by default, to combine the kits of the card and memory module is not a luxury!). Indeed, given all the possibilities that these modules, and the price you pay, it's been expensive if we can save a jazz kit, 3 kits rock, reggae a kit ... .

with experience, of course I would do it again the choice! is the first real electronic drum module (I have not tested the TD8), but TD3, 5, 6, 6v, 7 are just kind of pager when you tap on the stuff connected to it.
Did you find this review helpful?yesno
»