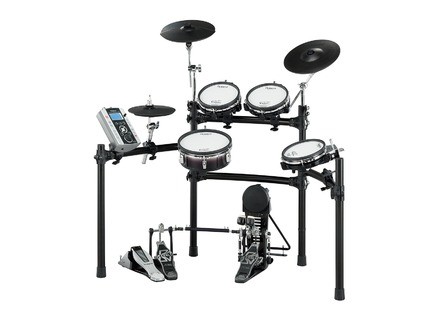 TD-9KX, Electronic Drum Kit from Roland in the TD series.

Product replaced by the Roland TD-9KX2.

demonik's review (This content has been automatically translated from French)

Roland TD-9KX
5
Owl and playful electronic drum
Did you find this review helpful?yesno
»

Roland TD-9KX
4
Question design is done better but very robust, very solid, sound very good at this price! By removing some effects on the kits is really happening to make batteries extremely close to the real acoustic. Enjoyable to play.
I use it on stage with my band, it sounds right away without the need for sound with microphones, mounting the volume and send it!
Good enough expressiveness, realistic sounds with possibility of making changes to his taste.
Definitely the best quality / price ratio of V-Drums in mid-range professionals already satisfied.

jmarcz's review (This content has been automatically translated from French)

- I hsit with rubber pads MODEL a question of price but APRS having a short essay in the store I cracked. The touch of skin mesh is fairly close to an acoustic drum so as not to disrupt the game when switching from one another. It's a bit diffrent for the cymbals and the kick pad.

The sounds of the modules and can be finished rglage sduire me in this trial.
Over time j'apprcie The variety of sounds available. It lacks all of the same 2 or 3 sounds and hi-hat cymbal crash (which could have no problem replacing some or electro percussion sounds). Some sounds are Toms ... surprising. We often ended up using the same sound (maple in my case). The possibility to change the length and height of each of the permits will integrate the best in kits or even radically change with extreme rglages (eg a snare "Heavy" with a tuning +40).

The 3-zone pad Ride brings a bit of thanks to ism DIFFERENT Sounds: bell, head, rim (Edge). You can always assign a crash instead of a ride-Edge.

The kickpad rubber can fail to rebound.

The sensitivity of the pad snare is good and allows bearings "ralistes" (even when we hear a little bit of electronic cot when you're in the low amplitudes). the "cross stick" and the "rimshot" also participate in ism.

The hi-hat pedals may be is not the best of this kit, you must do something rglages if we want to emphasize the kicking game.

The kits "brush" is used for plans folk.

While the ism must not be pushed too suprieurs The models in more onreux (which I can only assume), but it is enough for the amateur that I have exercised in his corner without embter (too) its neighbors and having fun.

The reverb is very usable, many rglage, the shipment is dosed per instrument for each part in this kit sounds ism. A Eq is also available to offset the weaknesses of a headphone.

- The other e-drums I've experienced were: a kit with RCup Pad Simmons (the old stuff hexagonal plywood covered with rubber) with a trigger and a Roland DR550 branch as well as Midi a one and a DTXPLORER td3K quickly tried in stores.

- It's Roland is not given but of Contents e-drum, to have sensations close rel must pay the price (APRS there may be both for less). However, the price is close to a mid-range acoustic kit complete with scrap.

- I would do without this choice hsiter. I could try it in the store o I bought a TRS prices close to those practices on the Internet (1850th beginners 2009) with a headphone, a stool and a pair of chopsticks first prize, and I was able o win in a row and rgler in 3 times (home of the drumkit, Dijon), which finally convinced me.

The cot "gun" can be attnu by editing the Advanced Settings of the trig (scan time, retrig cancel, etc. ...). The trigger rglages strongly influence are obtained, they both multilayer, if we use a sensitivity leve it too is still in heavy vlocits and sounds with a lot of attack.

APRS use more live, the module shows some limitations. You really rgler triggers to grate onions for the sound and the level of every keystroke including, with the snare ghost notes.
For use on scne clearly lacks two direct outputs (1 for the kick and one for the mini CC) to grate the dynamics of these two sounds separately.
For cons, the time gained to settle and make the balance ... and convenience of scne games (well especially for musicians ...). Sounds in such uses are plenty good (if you compare a brief sound in a small room forcment not made for music ...), APRS comparison has an acoustic I think not really object.

Regarding the rest of the kit he holds up in a little over a year rate of 4 hours a week, ten outputs (so much disassembly / reassembly) no report. May be a small decrease in the sensitivity of the cymbal pads (and KD8 but no longer a problem).

I am using more than 3 pads, the 4th PD85 replaces KD8 through a menu yourself. The rebound for the bass drum is much better.

With the release of the Alesis DM10 rcemment I rflchirais certainly hold the investment REPRESENTATIVES TD9 kit if I were to make this choice today. The DM10 has INTERESTED CHARACTERISTICS (supplmentaire output, fader faade, USB connection, possibility of future load banks recognized publishers ...), do the sounds will also be usable.

shamanico's review (This content has been automatically translated from French)" Perfect for a beginner ... my 2nd sky"

-Have you tried many other models before buying it?
No, some acoustic and some electronic.
My desire to acquire a drumkit dates back to college. Along the way, the idea of ​​a mail I found a reasoned choice and TD9 KX struck me as a compromise more than adequate with all meshed skin remo ...

-What is so special that you like most and least?
The +: the module very instinctive, easy to access.
the -: the kickpad KD-8 kick drum frankly lacks realism.

-How do you price / quality ratio?
fulfill a dream here is priceless but you have to keep right. This drumkit is really not given, but the reliability is to go. I pass, I sit back, I play, and I still have the satisfaction!

With experience, you do again this choice?
holy grail yes.I have my!

Did you find this review helpful?yesno
»
Read the 9 user reviews on the Roland TD-9KX »