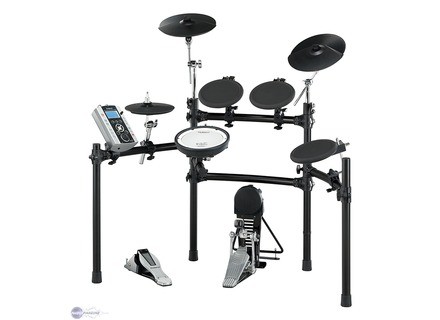 TD-9K, Electronic Drum Kit from Roland in the TD series.

Product replaced by the Roland TD-9K2.

cylman's review (This content has been automatically translated from French)

Roland TD-9K
5
I utise since December 2008!
I love the sounds that have a lot to evolve and it brings an acoustic drums, régalges also because we can adjust the tension of the skin, the size of cymabales, pitch, add muffles, effects, etc .. c is very complete!
I also like the fact that you can play hard MEMC we like and send the volume you want ..
I also like the strain of sounds that allows a different look .and game more innovative.
facilitate its transport and its weight !! and well on its mounting rapiditer, touch is also very pleasantly surprised nice! what I like least ... well I do not know, I see nothing!
the price / quality ratio is very justified, and I need to tune resells because otherwise I would do this choice without problem
Did you find this review helpful?yesno
»

Roland TD-9K
4
I have this model for over 4 years now, and I must say that this is really what I needed model here:

General:
- Palette of its more than correct (with tone controls for each sound)
- Possibility to expand the base set (I added a wrinkle CY 12R / C, and there is still an entry free)
- Ability to choke cymbals after the strike.
- Possibility to use a double pedal
- Easy grip module
- Easy navigation through menus and implementation of various functions
- Possibility to create 50 possible sets (100 with the latest firmware update)
- Adjusting the sensitivity of different sensitivities triggers
- Adjusting the mix of all instruments
- Setting the surround effect

To work over pieces USB key is very convenient (mp3 only supported with the updated firmware ...)
Monitoring tools are less convenient because readability is not terrible. But it can always help.

Gameplay:
Regarding the gameplay, so do not expect to find the feel of an acoustic drum. Even if a mesh snare skin was not quite the same and made the same accuracy as a real skin. That said the response varies in intensity with the strike force. It is possible to play while sensitivity. The demo video Johnny Rabb convince you.
on the other hand, whatever tom, the sound remains the same regardless of the location of the strike pad or skin. This is an advantage for some and disadvantage others. More with electronic drums, whatever the type, the sound is good. Ironing on an acoustic, you must rework the shot before it sounds ... !

And ultimate happiness: you can spend several hours again without getting tired ears. The volume remains under control!

To conclude, this drumkit is very versatile in its range of instruments and sounds on offer, and all available settings.
It can be used for both work from home (small size) in a group.
After that remains a drum. The dynamic response lacks a bit of realism, and the effects of the shot ood selected for each pad sounds.

With experience, I would do without this choice problem. This range of Roland perfectly meets my atentes. But I would love to test the successor module TD-9, TD-15. A priori the game feel has been improved, and the metronome click can finally be sent to the headphones only instead of being hopelessly mixed with the stereo output.

zleto's review (This content has been automatically translated from French)

Who should use this drumkit?
1. For beginners (who have $ $ to invest in a super product)
2. With experienced people who require low-noise
3. For people wishing to relocate their drumkit in too much trouble.
4. People who want to play rock band as a true drumkit eggs ^ ^ (no comment)

Who is NOT intended for this product:
1. Demanding professionals. Should not be con ... a drumkit to € 1400 will never replace the feel of acoustic drum very high marks. Obvious right?
2. People who never want to hear a single "poc" playing. To do this, move on without his instrument ... such as not making music ^ ^
3. People who want to make studio recordings. It sounds obvious, but clearly not for everyone. There are "gadgets" added to register, but it sounds change options. When you buy an air conditioner for your home, you do not buy a car with air con nan?

The main differences between the models is the mesh head pads (mesh) that are better at the "touch" rubber pads that, I think some have 3-way cymbals. all this is customizable even after purchase.

Now to be clear is not given. Of course. But in comparison, the other "competitors" offer toys, while Roland has a real instrument. (I've tested eh ^ ^)

The panel of 50 types of sounds is more than enough for many styles, jazz, rock, pop, metal, etc ... ptits sides of fun here and there, sounds interesting. This is not the best quality ever made, it's not a table recording drums pro. That said, for those interested, just plug your drumkit in your table MIDI pro and you truly professional recordings with the sounds of your mixer / sampler etc.

Now playing, the sound is very good, and will depend much on your amp. Small 20 amp / 25W are enough to learn but do not give a great sound and are usually a little low bass. You end up typing in the box like crazy

You can add any (or almost) powered speaker, which will give a real sound to your drumkit. It is best to try in-store) (it cost the slab and it gives a better idea than reading the words ^ ^)

Super good. Rubber pads are a bit noisy, it poc poc do what. The "worst" is the kick pedal. Necessarily make it a little kick to the ground, depending on your power play ^ ^
If you play really low and the sound is low, you will hear may be a bit CSWS CSWS but ... You really play and silence .. a drumkit is ptetre not the most discreet instrument.

The electronic functions of the control are bluffing. Choke cymbals, differences in sound depending on the power of the strikes, it causes no ON / OFF the. There is a real escalation in the intensity of the sound, not that. The cymbals have more sustain and so on. In short, we believe it outright and only a real drummer who'd played a long time on a sound will repeat.

Of course, no adjustment of the skins (since there is no year), no shit that moves with the wood (as there is none) and all in a lightweight (even my girlfriend moves only occasionally).

If you do not pay it in for you ... shit. If you are rich in abundance, take the TD20 that will last you life, if this is really TD9 a purchase you will not regret it.

I bought it as a beginner (I just played a rock band ... it counts or not?) That I am two years as a raving lunatic ravings above ZERO wear (despite the blow I cymblaes put on me when I thoroughly believe) even occasionally a product that seems immortal.

PS, the rubber pads that cost a slab opportunity (for people to change skins mech) so even if by some miracle you had a pad "broken" / worn for 20 euros it is changed ^ ^

Incidentally, it is possible to connect the TD9 on rock band / band hero and everything ^ ^ Délire total guaranteed.

9 / 10 because it is true that we must extend much $ $ $. But I always said that a good instrument makes you want to play the match. A bad instrument disgusts you more than anything else.

So obviously, if I had the choice again, I would resume this TD9, if I had won euromilliards, I took a TD20

naimskt's review (This content has been automatically translated from French)" Super ..."

Pros: The sounds are really cool and what's more we can change the sounds of each cymbal or tom, There's a little mix in the module, great! because I use it for recording. MIDI!
She looks very robust! She throws! Easy to assemble in 30 minutes.

Cons: Maybe the system to fix the bass drum on the ground ... Otherwise I see it!

It is well worth its price! I was very surprised at the quality of recording, with a plug-in and more and it was a real acoustic drum sound, great! go for it, it's tough!