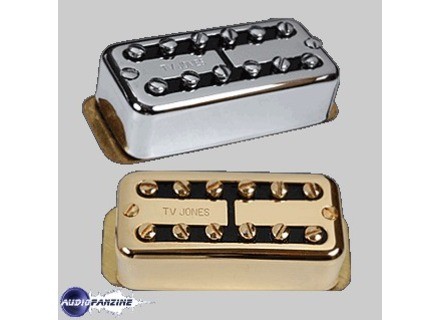 MacB's review (This content has been automatically translated from French)" Fan of Joe Perry, Keith Richards, Johnny and other GREENWOOD + telecaster, this mic is for you!"

TV Jones Classic
5
I use it for a month mounted on a telecaster neck pickup, with the verse in acute broadcaster initial of my guitar. Changes made in the image of good Telecasters, illustrious musicians like Keith Richards, Joe Perry, Bruce Springsteen or the recent, singer and guitarist of the band Gaslight Anthem, Brian Fallon. A fan of Neil Young, no worries.

You will understand it is a humbucker oriented rock old school or modern grunge 90 years of post grunge sound with bands like Queens of the Stone Age, Foo Fighters, Them Crooked Vulture. You can also Blues, blues rock, rock and roll, even jazz, folk, rock, micro super versatile, with the personality more like the contemporary home GIBSON, 57 or as the classic models Burstbucker 1 and 2. For Metal unfortunately passed your way see another model from TV JONES, eg Magnatron, the most aggressive of the brand!

This is a high quality microphone or custom manufacturer of American TV JONES who team guitars of famous Gretsch company. Mine is the classic model which fits in said handle "english mount" (model "english" is more appropriate in terms of installation, voltage for a telecaster, but that does not diminish power compared to the more equipping big guitars like Gibson or Gretsch), who retranslated the sound of old gretsch 50 years. Mine is the microphone that the famous team of U.S. models Gretsch White Falcon, Chrome finish. It is indeed a TV JONES CLASSIC, not a TV JONES FILTERTRON below in terms of sound quality, output level, which team including reissue model in FENDER telecaster cabronita in 2013.

I used to play blues, rock or post grunge grunge, it is perfect for that. I use a telecaster american standard 2012, black, black pickguard, maple neck white, all connected to a FENDER PRINCETON REVERB 1965 Blackface. The Telecaster was originally equipped with a micro micro twisted in custom sleeve (which is not found in the officially authorized distributors of spare part, as the Nocaster or texas) and a common custom broadcaster (that here can easily be found). I Regrete anything about changing the neck pickup even though this is a twisted, I changed a model in FENDER high range to the high range (better I think) in the TV JONES.

What about the heat, personality, level of output than correct power. It has changed my telecaster which was already a very good guitar guitar custom shop, but without having to débourcer 2000 or € 3000.

I advise fans of the ROLLING STONES, AEROSMITH, or, as most modern group like RADIOHEAD, GASLIGHT ANTHEM, FOO FIGHTERS etc ... It is accurate with a good amp behind the sound these groups.

Finally someone who does rock that equipment such as mine, mirco is sufficient to itself, no need to OD (my microwave powerful enough!), Saturation of the amp, you can it adds a Fuzz pedal, it works well, do not worry!

To conclude, I would say that respects the nature of the telecaster sound (the famous "Twang" it just reinforces for me), but it adds a plus, since the sound is "hybrid" of sorts, between good Gibson or a Gretsch and a superb finish telecaster custom shop as his.

THIS IS IMPORTANT IF YOU HAVE AN TELECASTER: Note that during installation I am mounted TV JONES closer to the strings without y'ai no longer a nuisance linked to crimp frotemment ropes on the micro . Then lowered the bridge pickup. The bridge pickup fits much better with the TV Jones now. The default of the telecaster, treble a bit unexpected is now set on the one hand through the TV JONES who rebalances telecaster in terms of sound, and secondly by lowering the micro acute, and the Upscale TV JONES nearly all of the strings.

TV Jones Classic
5
I use a little over a month now. I have installed a Epiphone Dot in the early 1990s, instead of poor quality fake PAF who were there original. I first tried microphones Alumitone Lace Music on this guitar, with a result a little "cold" too modern for my taste.

I would do the same choice today. These pickups are clear, with a very beautiful setting treble, mid and bass, and a slight natural compression. Their sound is a remarkable elegance, equally suited to a rhythmic play as solos.

A very good point: if you've played on good Gretsch, you will find a particular element Filtertron period, which is a humbucker sound quite sharp and delicate one may think that it is sometimes single coil pickups P90 but with such a good "punch".

As for the price, it is better to purchase ...

TV Jones Classic
5
I bought these mics on the advice of many forums to transform my Gresth Electromatic in "real" Gretsch (in sound).

Obviously the only comparison I can do it with the original pickups Electromatic.

Me after a very mediocre handyman, I managed to dismantle the assembly in one evening without worry thanks to the video on the TV Jones site.

Good then the sound. Well, it's much better: the sound is much better defined (where the original humbuckers are a little "mellow", fishing and lack of clarity.)

And good once you played with, difficult to return to less, so obviously I would do this choice.

As for the price, I find it a little abused, so I went through a site other than TV Jones for having about 20% cheaper (but it is true). Only drawback I had to wait longer.

macko's review (This content has been automatically translated from French)

TV Jones Classic
I changed the pickups on my guitar Cort Jim Triggs 2 (standard gibson humbucker) for TV Jones Classic.
The installation is simple, a trick to avoid losing the buttons at the bottom of the box, use a rubber hose 6mm diameter provided for aquariums.
The sound is fantastic! Gretsch Pure U.S., what are the microphones used by Brian Seltzer or ZZTop (mounted in place of the originals).
Powerful, clear with good crunch as the amp, respond fantastically well to play the right hand, perfect for rockabilly, rock, Texas, velvety jazz, blues. The balance between the two pickups is perfect.
I've had two months. After comparing with the Gretsch Asian, there is no photo, is the day and night. They are comparable with U.S. high-end Gretsch.
I do not regret at all the price and choice.
A repeat if necessary.

Just a little regret having waited so long to buy them!