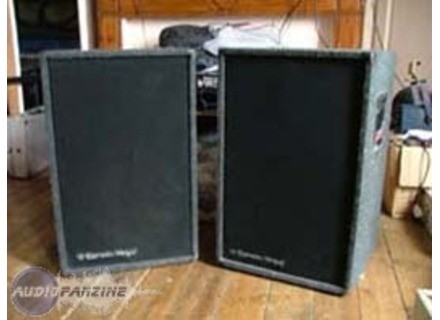 Cerwin Vega MV-15B
4
I have had two of these beauties for about 15 years. For 7 or - so of those, they have sat in my garage, unused. Now, since one of my singer's Mackies blew up, we've been using them for gigs in medium to large size clubs.

For what they are, I like that they aren't too heavy. (the above mentioned Mackies weigh about 6,000 pounds) These are pretty easy to hoist up and mount on a shoulder high speaker stand. - I can do this myself (I'm a big ox) but with 2 people of adult stregnth, it's a breeze.

They have a carpeted finish which wears very well, and pretty much look like they did when my old band rented them to own back in the mid 90's.

I have used EV's as well and those Mackies... Being a bass player first, and a singer second, I don't know the difference of one speaker from another, and they all seemed to &quot;do the job&quot;, but these always sound good. (We have gotten more compliments on how we &quot;sound&quot; at gigs these last few shows than the whole time we used the Mackies). (Of course for &quot;big gigs, (like anything bigger than the average wedding reception hall) or for really important gigs where we must sound top notch, we hire a sound guy and leave these at home).

These are passive speakers, and I believe from internet research (although it's not on the speakers themselves) that these are 200 watts @ 8 ohms. -which means we can get away with running a 500 watt (at 4 ohms) powered mixer - as long as we don't run these in series... (and as long as we don't turn the PA more than half way up, which we never need to do. That mixer also drives 2 monitors, which we rent.

Seems to me they have more bottom end response than the Mackies, and give us a fuller sound. (We don't run my bass through the PA... I've got all the bass rig I need. So, it's 2 vocals, keys, a miked guitar amp, and a miked kick drum) No problem with mids or top end either

Value for the price? I couldn't tell you what I paid for them, as I rented them with an old band for 2+ years, and then bought out the rental, but I sure wouldn't part with them for a dime under $300 each.

If we needed more, I'd buy these (or other Cerwin Vega!s) tomorrow. They're awesome.
Did you find this review helpful?yesno
»

Published on 01/21/09
Cerwin-Vega! announced the appointment of Erikson Consumer as the company’s representative for its home speaker products in Canada.