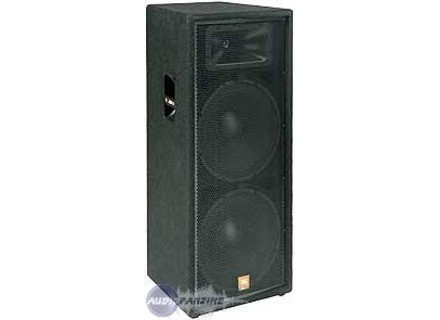 All user reviews for the JBL JRX125

JBL JRX125
5
The JBL Pro JRX 125 is a pair of speaker cabinets that I purchased years ago for under 1000 dollars. They still look brand new and sound exactly the same as they did the day that I purchased them years ago. I have used many JBL speaker cabinets before and I know that most all of JBL products are built to last a long time. These cabinets are built with JBL’s best drivers and crossovers. They have steel grilles and are covered with carpet material to keep them scratch proof. Each speaker does have handles on them (built into the unit).
The frequency range is 38Hz to 16 kHz with a peak capacity of 1000 watts and 500 watts of continuous power. These speakers do get loud though and have a crystal clear sound. I originally purchased a pair of these back in 2007 for some shows that we had going at the time and I was not sure if I was going to keep them because I thought that I was going to need more power but they ended up staying apart of our gear all the way up to this day and I would not think about getting rid of them because they have a great sound and the tonal quality they provide for certain instruments like guitars is second to none.
For the money, you will not get a better sounding speaker in that range. These speakers are pretty heavy but for the quality of sound you will get it is well worth the back ache of carrying them around with you. These speakers are the true reason why I love JBL speakers so much. They are made with the best materials and have the best sound (in this price range). I would purchase these again any day, even if they were made years ago I still think they have held their value well!

- Which feature do you like the most / the least?
Pros:
Price!!!
Output power
All in one (half three-voices speaker)

Cons:
Weight (you'll break your back if you try to carry it alone. Not designed to be transported by one person)
High frequencies (imprecise highs. No details)
Mid frequencies (where are they?... Stop dreaming: the 15" speakers produce only low frequencies)
No protection corners

- Did you try any other models before buying it?
An Electro-Voice speaker that was over 20 years old
Hi-fi speakers (B&W, Infinity, Technics, ...)
H/H
Mackie SRM450 (V1)

- How would you rate its value for money?
Very good All in one. Very low price. The quality is on the same level as the price. The cabinet's wood is a bit fragile. No corners. Cloth covering tends to come off. Nevertheless, the product is ok for mobile disco applications!

- Based on your experience, would you buy this product again?
If I could choose again, I would buy a pair of JRX 115 plus a subwoofer. Do take the weight into account!!!

- Other
The speaker is ok for dance music. For vocal reinforcement, choose another product!
I use them as P.A. in bars, dance shows in sport halls or birthday parties. They work very well for these applications! However, the JRX 115 is a better choice if you want to fly the system!
I replaced the tweeter with an EV driver. An active crossover would be better to get a really good sound.

Considering the price, this speaker has punch!

This review was originally written by piotto on Audiofanzine FR.
Did you find this review helpful?yesno

renaud.gimenez's review (This content has been automatically translated from French)

JBL JRX125
Used on Crown amp (do not know the ref) and outgoing équalisés a 01v.
Coupled to a 600 HK lucas
It is used for concerts in front of 300 people any more because already this gauge is little mention bass plus highs that do not exist in these speakers (hence the HK for acute because of the simple box low is short for the gauge ...).
Choice I would keep them but inevitably catch up alone because the sound is dull and nondescript (like it's not a concert, the sound comes out of the mobile phone actually ^ ^) and a good EQ in the ass for a few frequencies quickly surpass others.
Did you find this review helpful?yesno

dudu74's review (This content has been automatically translated from French)

JBL JRX125
3
We bought ca because they were cheap.
It grows in the ass, it's going low. But in the 6kHz must be cut if it is the cata.passe for rock, dj, nightclub ... but it's acoustic instruments mort.Pour the way, this is not defined.
It does the job qd was not tunes.On dens to two and it is costo.
For a limited budget you can start sending in the open area is in small venues.
If they had not I wonder how it would.

cucu41jblsrx's review (This content has been automatically translated from French)" okay ...."

JBL JRX125
4
The JRX 125 are pregnant are correct, have my speakers start to compare to my mp415 jbl, it is kb at the sound quality!
for the price of the speakers have to start it will change later if wants to have move to a more productive, like srx series which is really very good, I have the SRX 728S and it's really good .
I made a try with an amp and a hpa A2800 dynacord cl1600, and the sound was really much more beautiful and punchy picture with dynacord not, there really is a larger displacement of the membranes may be too much .. but its tape .

I buy the kit with the JRX 125 amp crown xls 602 and cable, for 1200 euros, to flee because the crown amp is really bad bad bad bad!!
therefore pregnant with a new dynacord cl1600 Used or another find on boncoin kit for beginners and shook more balance.

For me to have good speakers to start, because the store I heard cerwing vega, ibiza, Beringher, and much weaker in the jbl slap bass but are better at high frequencies it opens more and does not leave any treble chiaque it may be a crilliarde, but with a good filter it solves the problem, but this time by connecting a 1600 cl dynacord the bottom is really improving and is ideal for providing mobile disco.

yes some other model tested before purchase

they are relatively efficient for small speakers that will glue a good amp behind
Select Destination fesait I shoot with a 602 xls but poor finishing ar clipper before reaching a proper sound level
since I use them with a crown MT 1200 .... and nothing to do
it is even when the scope of use with a compressor and an eQ because the highs are really yucky when you push and thoroughly deserves to kill -8/10dB of 1kHz and 2kHz and roughing of -3 has a-10dB from 6kHz

after 2 years of use and intensive pro I separated because I spend on the more upscale but these speakers are a good buy for amateur and professional debuttant.
Very robust level in HP they are caught in the gueulle and not an HP or a roasted compression!
For aesthetic level against the carpet is the m @ # & <>! AC takes the luster dust fleet of beer etc.
I pulled the carpet and have repainted the epoxy has (waterproof, strong and good acoustics for a 3-layer revettement fully charged or + / - 3mm thick)

experience with the same budget and I would resume these speakers without hesitating
with more budget I would go on MRX 515 because they are as effective (although moin sub (65Hz -> 22kHz) and especially as powerful for moin moin of bulk and weight ... and especially because they get a real MA 2400 without blinking
against budget by level one passes from one to two ...

I recommend using Crown amp / Amcron (MA or MT VZ) of old generation of these speakers because they are very sturdy and powerful
(And even if they lived they vlent moin expensive than the crap that crown with integrated processur sells today ... I'm not a fan of digital still and min of "all in one" but it's still my avs)
Processed all with a dbx DriveRack PA + because for the price it's a real little pro processor (to start) and it already has these speakers in a preset

After if I had another experience and budget ... I would leave office on a system of Nois Control Audio .... this much more expensive but much more
sensitive / efficient / powerful / dynamic
but you have to start small before you can invest in this type of box

yes some other model tested before purchase

they are relatively effective pregnant little we glue them a good amp behind
departing fesait I turn with a 602 xls but the poor was finishing ar clipper before reaching a correct noise
since I use them with a crown MT 1200 .... and nothing to do
it is anyway the hang of using them with eQ and a compressor because the highs are really yucky when pushed and thoroughly deserves 1kHz and 2kHz to kill -8 / -10dB and -10dB a roughing -3 from 6kHz

However, for the price are very good speakers "almost" full range (47Hz -> 16kHz)

with the experience and the same budget I would take these speakers without hesitation after more budget I would go on MRX 515 that already possesses because they are as effective (though moin sub (65Hz -> 22kHz) and especially as powerful for moin moin bulk and weight ... and especially since they conceded a MA in 2400 in stride
against budget level by changing from single to double ...

After if I had the experience and the budget ... I would leave the office on a system Nois Audio Control .... this much more expensive but much more
sensitive / effective / powerful / Dynamic
ais you have to start etit before investing in this type of box
Did you find this review helpful?yesno

JBL JRX125
so when we know that the human ear does not discern the sounds beyond 15 or 16 kHz, and if there may be 0.5 percent of the population that receives up to 17 kHz is already huge and these people are engineers, musicians or classical music lovers rather sharp in the HIFI-end ...

habord of all there's no looking it's JBL ... for those who have already heard from the speakers to sound "American" (Electrovoice, Cerwin Vega, etc ...) you can doubt what you have with these JRX 125: power, smashing sound, but slightly "warm" at a time.

these speakers are equally at home in high-power listening "genre hi-fi" because they are accurate and in contrast to previous opinions I do not think they lack treble, just well even (something I did with my Behringer ULTRACURVE PRO DEQ2496) and send a few harmonics in moderation (something I did with my Behringer Sonic Exciter SX3040), however I do not do to excess, they do not need it.

I think it's mostly psychological, having seen the characteristics they do not go up to 20 kHz gives the sensation that something is missing, as is human reaction, do not worry about That

we must not forget that these speakers have the stuff that is in the upper range, only the woodwork and finish are cheap they remain at a reasonable price.

Summary: This is a great choice!