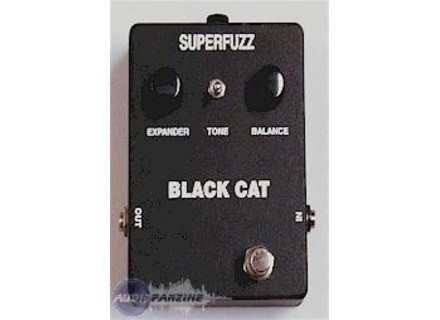 Black Cat Pedals Superfuzz
5
The Black Cat Pedals Super Fuzz is a reissue of the Univox pedal of the same name. For those who haven't heard of it, the Super Fuzz is a vintage fuzz box from the 1970's that has attained legendary status. As far as I know, this is meant to be the same pedal. It's got a basic make up, with 1/4" connections for input and output and a jack for a nine volt power supply. It also has a compartment for a nine volt battery and boasts a true bypass switch. It's rackable since it's a foot pedal.

The configuration of the Black Cat Pedals Superfuzz is really simple. It has knobs for controlling balance, an expander, and a two way tone switch, which is just like the original Superfuzz. While these are not the most traditional parameters, they are keeping in this being a direct copy of the original. I haven't seen a manual for this pedal.

Having used both the Black Cat Pedals Superfuzz and the original Univox model, I have to say that from memory this is the same pedal. The original might have a more 'vintage' design, but this definitely matches the sound. I've never had the chance to have both of the pedals in the room at the same time to hear the difference between the two, which might change things a little, but judging from memory this Super Fuzz is very close to the original. It's awesome that there's a modern made version of the Super Fuzz on the open market since it's such an awesome pedal! Even if you haven't used the original Super Fuzz, the Black Cat model is going to be a great addition for any guitarist.