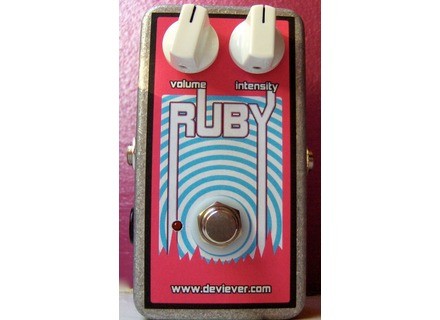 Ruby, Fuzz pedal from Devi Ever.

Th3_Par4doX's review (This content has been automatically translated from French)" Fuzz / Treble Booster responsive and versatile."

Seemingly simple, not so obvious here that has to ring!

The grip is easy at first, but many subtleties offer the user adventurous beyond these two knobs.

The regulars of the brand know that the Devi Ever pedals are particularly wild and bloated despite their crudity which makes their handling difficult sometimes.
The ruby ​​is not the most difficult to take in hand pedal catalog but it is far from a pedal "plug'n play" as a Soda Meiser example.

The pedal is very bright, but also very respectful of the signal from your instrument, including the most extreme settings.
In fact, it responds beautifully to tone control of your guitar volume and has a prominent place in the beginning of the string, or it is particularly effective to push amps and other effects. (Nothing prevents you and I encourage you to try twisted stuff at the end of the chain, but it is easier to use that).

No manual, but a lollipop Cherry bio really delicious and other fun little goodies are included with the pedal.

The intensity setting also is fairly particular to handle, since far from merely affect only gain the effect, it also alters its tone and character.
Below 12, there is a hollow in the midrange that appears, the sound becomes open and slamming metal, also gaining a lot dynamic.
Over 12 mediums return en masse and sound becomes thick nasal, compressed and full of harmonics, the maximum ringing in ultrasound appears, the sound is supercharged, and the pedal sometimes just to capture the radio.

The volume also affects the thickness of the pedal, be noted that the very large reserve volume and brightness of Ruby makes an undeniable ally who wants to push an amp to overdrive the way Brian May.
Indeed, this pedal does wonders upstream amp and pedal drive and / or fuzz (especially if they are dark). I used a lot to push a Big Muff and my amp is a real treat. In combination with a darker pedal drive as Karaoke Party the same manufacturer has been able to produce very balanced also crunches.

But the magic does not stop downstream of Ruby, it is essentially the source side controls of your guitar!
Indeed, if it sounds like a shrill fuzz quickly, compressed and tinny the Maestro or Tone Bender, bring your volume back, adjust the tone to your liking .... You get a treble booster accurate and slamming the quick attack with a lot of dynamic, palm-mute ultra precise and harmonic output perspective! In doing so, the perceived volume of the foot increases.
Fast attack Ruby gives him little sustain and lots of reactivity, which makes it unique and irreplaceable in my direction.
Only downside, it not generate a lot of background noise. But I intend to find a fix for this ... It bothers me still not too final for the uses that I found here but it was PERFECT. I bite a star still here and for his temperamental side, even if that's what makes it so cool, you will need to take into consideration poor mortals!

I use it for over 2 years, I love it so much that I will definitely make more. I'm a big fan of Devi Ever and I made, and played a lot of custom effects for me and some friends via kits purchased on its site.

I did not have a treble booster before, but I think that this effect is distinctive and unique.

I had won after a contest organized by Devi Ever, but less than 100 bullets I think it is a good buy if you want a treble booster a bit quirky and temperamental side and the player Ruby suits you . =)
Did you find this review helpful?yesno
»

View all 3 videos of Devi Ever Ruby »

Other Devi Ever fuzz pedals