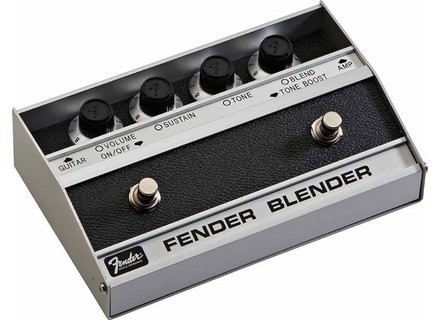 Fender Blender Reissue
3
The Fender Blender Custom is a reissue of the famous 1970s fuzz pedal. It doesn't have any modern features, unless you count true-bypass and a 9v power adapter jack. There are no lights or digital anything. It is supposed to use germanium transistors like the original, but unlike most germanium-based fuzz pedals, at least the ones I've owned, it takes the usual kind of power adapter, not the reversed polarity kind.

There are four knobs. Volume and Tone do what you'd expect. Blend strikes the balance between dry and wet signal (useful, because the effect is pretty crazy when not mixed with any unprocessed signal). The Sustain knob is supposed to do something like compression the way it's described in the manual, but it's really more like a distortion-level control.

There are also two foot switches: on/off and tone boost. The tone boost gives the treble a kick and emphasizes the octave-up element of the effect. With the tone boost off, it's more like a regular fuzz pedal (although a pretty abrasive-sounding one).

The sound this thing makes is piercing. You know in The Matrix when Neo screams and his scream turns into the weird sound like a dial-up modem? That's what this sounds like with the tone-boost on and the blend all the way up. You can mix in some dry signal to keep things more in control, but even then this is a pedal for people who like noise. Also, playing chords or anything harmonic makes weird things happen. Particularly when you play fourths, you get this weird sub-harmonic sound with a very ring-modulation-type atonality to it. It sounds like your guitar is haunted. By whales.

This is an ice-pick in the head sound. If that's your thing then cool. There is no real way to tame this pedal. Mixing (blending) in dry signal makes the effect quieter, but not less extreme. This pedal is not, nor does it try to be, some bluesy smooth overdrive or creamy violin-like distortion. Again, this sound is going to be exactly what some people want, and is not going to sound like music to others. The important thing to remember is: it makes that sound. It cannot be prettified or cleaned-up. It always sounds like a buzz-saw.

I got this pedal a couple of years ago because nothing else sounds quite like it and I thought I would want to have that sound at the ready should the need ever arise. So far, I've not had a real reason to use it, other than just messing around by myself. I guess I was thinking maybe somebody in my band might one day ask me to contribute a guitar solo that could also serve as an implicit critique of music as an art form, but that hasn't happened. Yet.

I should note that I've not tried an original 1970s four-knob version, though I did used to have a three-knob a while back. The original three-knob sounded better to me than the reissue four-knob, but they can't really be compared as the three- and four-knob versions of the Blender were always, I'm told, different beasts.

Surely this pedal is useful for somebody in creating his or her signature guitar tone, and I think anyone who appreciates the noisiness of some of the weirder Hendrix stuff can also appreciate and find a use for this pedal once in a while. But it only makes one sound, and that sound is something that average audience can tolerate for maybe a minute or two in the course of an evening.
Did you find this review helpful?yesno
»

mikyn's review (This content has been automatically translated from French)

Fender Blender Reissue
FUZZ 70 SILENT VERY HENDRIX WITH LIGHT EFFECT OCTAVE ...
REEDITION THE SAME LOOK THE ORIGINAL KE
A BRANCH IN 1ST IN THE CHAIN ​​OF EFFECTS OR BEHIND SA WHA

ULTA EDITION ON PAST SIMPLE TYPE OF SOUND 70 PUTTING THE BOOST TO A MINIMUM
A INCREDIBLE DISTORTION TO DO FEAR ITS NEIGHBORS ...

I RATHER THE PERSONAL USE ON SOLO C DIFFICULT TO USE IN AGREEMENT DUE TO KI LOCTAVEUR falsity LESSER OF THE GUITAR EFFECT GIVES BAVEUX ...
C EFFECT USED IN ONE NOTE AT THE TIME BUT CAN KAN CA SAME RING
THUNDER ON CERTAIN AGREEMENT GOOD PLACE ...

KIL NY DAMAGES NOT HAVE LED KON AND CAN NOT Disengage Octaver ....
IL parrait KE THE BRIDE AND CUSTOM VERSION (loss of) C TRUE AND THE INSIDE FRONT G tinker
D BE SATISFIED BUT I NAI PUS COMPARE WITH VERSION 70 YEARS.
BUT Pourkoi VERSIONS REISSUE IS IT NOT REPLIKES CORRECT?
I DO NOT KNOW THE VERSIONS REISSUE EXACT SPECIFICATIONS ORIGINALS.
I AM NOT A BIG FAN OF THE FUZZ BUT I THINK THAT THE KEEP IT IS WORTH MORE
K A BIG MUFF IS SOUND UNMISTAKABLE.
Did you find this review helpful?yesno
»

Sabaku's review (This content has been automatically translated from French)

Fender Blender Reissue
4
Reissue of the famous 60's fuzz
it's a fuzz pedal of his peculiar because it issues is ...
MONSTROUS should try to realize it.
it is indeed used for solo Bullet with Butterfly Wings Smashing Pumpkins.
the pedal is made of aluminum, very strong and therefore good looks.
This is an intriguing EST resistance has been changed in this new edition, which the bride's enormement.pour avoid this we must attach a wire to divert

Very easy to use, 4 knobs Sustain, Volume, Tone (going to the fuzz of distortion by turning the knob), Blend (it regulates the amount of distortion)
you turn is ca sonne.2 buttons to activate the pedal and a boost to boost tone of the whole.
the manual supplied with the unit has some nice examples of config.
otherwise fairly intuitive EST

Ha finally speaking her!
it is huge, we can spend the big fuzz was slight distortion ultra violent
and when we say violent ... I do not know of a pedal that I like him!
but hey if you put it all back, which is not recommended, it becomes the yogurt.
you can use it to make much of that vintage fuzz to make very very heavy!
jai otherwise try this pedal with a bass and cest geniale

boost button tone can boost the sound, if you have any humbucker allew you need to play with this button if you play constantly active with simple bah not need microphones.

Personal I use this pedal for some violent passages in groups

I use it for 2 or 3 months
jaime the originalitee this pedal, it has pa ny of pedal that produces the sound so violent
but hey I understand why pa fender has the resistance to flange sound ...
for the price (180th) we pay for
I hesitate no referrer so that choice, even if I sold it because of my amp I buy it back
Did you find this review helpful?yesno
»

Fender Blender Reissue
4
It's a Fuzz pedal + Octaver with the peculiarity of blending dry (clean) and wet (effected) sound.
Analog.
No MIDI, nothing digital, just switch on and turn the knobs!
Guitar (or bass) input, amplifier output.
Powered by 9V battery or 9V transformer

Without being bad, the finish is not one of the best and smells of low cost eastern productions.

The configuration is very simple
A Volume knob, a Sustain knob (which, indeed, acts as a drive), a Tone knob and a Blend knob to mix wet and dry signal.

A switch turns the pedal on/off.
A Tone Boost switch that enhances the effect of the Tone knob, while increasing the gain
The pedal is really intuitive and easy handling.

One would hope that this reissue had introduced a further "blend knob" for the octave, because sometimes one might desire just a fuzz with a little less of its higher octave.

Similarly, leds of activation would have been welcome.

The manual is a bit lightweight. I've seen better from Fender

Having put the knobs in a recess, prevents from accidentally touching them. This is a good thing!

The sound is just that thing! It propels you directly into the 60's / 70's, into psychgarage-rock.
As soon as I checked the pedal, the first 2 riffs that came under my fingers were: Purple Haze of our beloved Jimi Hendrix and Interstellar Overdrive of Pink Floyd.

This is not a versatile pedal. Trying to integrate it within most modern styles can be quite a nightmare, although it may well find its place in genre such as post-rock and indie.
Fans of experimental rock, noise and lo-fi will be delighted by this pedal!
If you put this pedal before a wah-wah and a delay, crunch your amp and let the feedback sing ... you are in sonic heaven!

Sustain button does its job, although it is more akin to a 'more drive' function.
However, something weird happens at the end of the note, in that it break abruptly in a way that reminds a noise-gate.
Tone correction is precise and effective.
Blend and is frankly a good idea, that's exactly what I was looking in a pedal.

Like I said before, the Octaver sometimes is annoying, because it is always radical, and it can make weird noises one cannot tame. It is regrettable one cannot operate its level.

This pedal is also one of the few fuzz / overdrive / distortion that does not deteriorate dynamics and this is a plus point.

Warning! The pedal has a very limited field of use. My advise is to use is to givean extra flavor to a pedalboard that has already an overdrive. On the opposite, if you want to buy your first distortion &nbsp;/ overdrive / fuzz&nbsp;pedal,&nbsp;direct you to something else, or you may be frustrated at not being able to just play with.

I have used it for 5 days.
What I like most:
- Sound
- The dynamic compliance
- The simplicity of use
- The dry/wet blending.<div>&nbsp;
What I like least
- the absence of leds&nbsp;
- Always the impossibility of deciding the level of the octave
- End of notes slightly truncated, like a noise-gate.

As a Fuzz pure, the only other pedal I've tried is the Electro-Harmonix Big Muff.
Neither better nor worse, they have their own characters.
What made me choose the Fender Blender is the possibility of blending wet and dry signal.

The price is OK for its quality! &nbsp;
That said, I wonder if I would not replace it with another fuzz without octaves.

It is quite possible that I will replace it with a proper fuzz, since this pedal does not exactly fit into my musical style! </div>