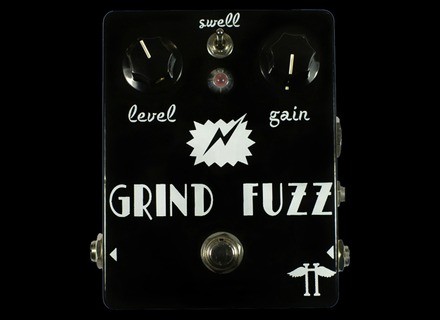 Finally, a fuzz that maintains note definition. This discrete fuzz/overdrive hybrid creates a massive result that boasts plenty of fuzz and sustain but allows tighter definition of chords and arpeggios. Thundering fuzz drive at full gain and warm sweet nuances at low gain. Especially transparent and fair-handed to guitars and excellent impedence response with Wahs.

"Swell" function adds high-end gain and harmonics and becomes dynamic-compressive at high gain. At full gain this effect can often sound like a slowly moving EQ (dark to bright) triggered each time you strike the strings. Absolutely superb for slow bends.

Side-adjust voltage pot can be adjusted with a pick to drop voltage and sag the entire circuit itself. In subtle use it can be used to lighlty compress the treble side of the fuzz. In extreme the pedal can become almost gated and unpredictable.

Heavy Electronics Grind Fuzz
5
The Heavy Electronics Grind Fuzz is a really nice fuzz pedal for electric instruments, namely of course electric guitar. Their pedals are all made in the US and are only sold by brick and mortar stores, which I think is really cool. The Grind Fuzz in particular is made up of all analog parts and has 1/4" connections for input and output in addition to needing power via a nine volt power supply. It isn't rack mountable as it's a stomp box.

It's really easy to use the Heavy Electronics Grind Fuzz as there are only a few different parameters at play here. Those included are for controlling gain and level independently, while it also has a switch for swell that adds some high end harmonic gain to your signal. You can also adjust the voltage to different amounts for slightly different sounds. The manual shouldn't be needed since it's such a simple pedal.

The Heavy Electronics Grind Fuzz is one of the 'cleanest' sounding fuzz boxes that I've ever used. What I mean by that is that it's easier to hear individual notes than with other fuzz boxes, as everything is still very well defined, even with high levels of gain. Even though there isn't a ton of control, there's enough to wide variety of different fuzz tones for sure. This isn't your run of the mill super dirty fuzz and it's really nice to find one like this since they're few and far between.

The Heavy Electronics Grind Fuzz is the perfect fuzz pedal for anyone who wants a fuzz box where you can still hear everything going on. I'm not a big fan of fuzz boxes that seem to lose your original intent in terms of notes, and that's not at all what you're getting here. Since nothing from Heavy Electronics is outsourced and everything made in the US in their Minnesota factory, I thought this would be a lot more than it is, but it's actually quite reasonable. Everyone interested in a fuzz box needs to consider Grind Fuzz.
Did you find this review helpful?yesno
»