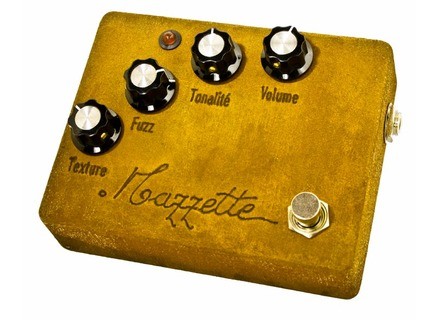 overland's review (This content has been automatically translated from French)" The ultimate Fuzz pedal!"

Ultra easy to use. No manual comes with the pedal, but why? I took 10 minutes at most to find several pretty crazy configurations, making other pedals fuzz / distortion bass that I used previously (RAT, Big Muff) completely tasteless. Testing each knob separately you soon figure out in which direction the Mazzette José Phuzz can go, versatile, whether to a dirty fuzz ultra hatched and not far from the Fuzz Factory Z-Vex (with extra control) or towards a more classic fuzz, which allows both to play well fat agreements with sustain, or perform a solo that comes out nicely in the mix. The switch is located in the perfect place to be able to engage safely without moving the other knobs, and the volume knob, the first of the chain on the right allows me to gently adjust the foot during the game dream, what.

Precise, powerful, full-bodied and magnitude. This is not a fuzz distortion, beware: if you're looking for something lighter, more mellow, go your way. The José Phuzz has personality while having some versatility (cf.2 use) and within sound of the instruments to which it is coupled. I use both with my Grestch Tennessee Rose (delicate feedback in the low, mid) with my Jazzmaster 1967 (well biting sound sharp, but with the roundness in the bass if I want) via a Fender Bassman amp head in 1966. And José Phuzz sit heat while making power and distinction. And sometimes madness: the texture button is quite interesting to use for it. I put in my effect chain a Tube Screamer just before José Phuzz, which allows me to change the texture of the fuzz during the song.

She never left my pedalboard since last May, and I use it in almost all my groups (FareWell Poetry, Birds, Storm, The Rise of the Tropics) both in the studio and on stage. A few months at most, but it crashed on arrival set in my other pedals that I tested so far for this type of rendering (RAT Turbo Rat, Big Muff, Fuzz Factory, etc.).

A nice little anecdote: I bought this pedal during a recent tour of one of my groups, The Rise of the tropics. We gave a concert in Montpellier at the Black Sheep and sound engineer of the place was none other than Tree, one of the two bosses Mazzette (the nice little box that manufactures, among other things, José Phuzz). Crank shaft seeing our overflow finds more or less old, and gear invade the scene of Black Sheep, brought us just before the scales selected Mazzette pedals, among whom were the Robert Drive, the Testikular and José Phuzz. Having chosen José Phuzz and having the whole concert with Trippe (because José Phuzz it also smashes a keyboard or a theremin), Tree asked me to continue the test during the tour. It was a rather special model, one of the prototypes. The deal was this: I like it and I bought it from my back (I could keep it or ask for one brand new), I'm not attracted to him and I return by mail. Attitude could not be more friendly and attentive musician seeking her and demanding. Obviously, I continued to use the rest of the tour, proudly releasing the poor of my competitors pedals. And bought it on my return. Mazzette thank you!

It's rare that I'm so ecstatic about the material. But I was looking for too long a fuzz character like this, which makes you what you give him, which easily leads you to the inventiveness, etc..

For 180E in addition, a sum but if the job can imagine handmade / excellent components back and compare it to the price of its competitors "boutique", and although there is no photo. Housing and rust finish ... Yum.

And support Mazzette: passionate people who work with love from their stronghold in Montpellier you just hast sound, man.

bouns83's review (This content has been automatically translated from French)" Fuzzesque"

Mazzette La José Phuzz
5
Fuzz "boutique" made by a bassist for bassists (friends scratch it also works well with your shovels), analog input jack 1, an output, a traditional power supply plug. Volume knob, tone for fuzzer in the bass or treble knob for the amount of fuzz fuzz injected knob for grain texture of the fuzz (grain more or less tight).

In the spirit of the configuration is simple, the action is effective and knobs separately we understand very well their effect on the sound. However it takes a little research to find a sound that comes out of the mix, for some reason I find it less plug and play my ex big muff, but once you get the sound, watch out!

This fuzz does not in lace, those seeking his creamy will go their way, here the guitar necks is cut, the mic stands, it shears the cymbals! The sound is very clear, very defined, the bass sound is respected (nothing to do with the mushy bass muff). The fuzz is very "grainy" which gives him a naughty side, even if we can tighten the grain, we can not creamy off some fuzz. It also adapts well with my passive roscoe beck, my stingray.

I use it for a few months and I did not quite tame, I'm still struggling to find the ideal volume to make it out of the mix (feel too much alone and disappear in game situation ). I have been compared in parallel with the bass big muff, and then we feel that we do not play in the same court. The effect is very friendly, the sound is very precise instrument, it does not lose dynamic where the muff or eats a little low (or choking) the Mazzette reproduces the growl and other low fat. The Mazzette does not ring at all synthetic, it is a fuzz character, scabby hair and rude, but altogether endearing as respectful of what he is given. Price justified by the competition and what it offers. Moreover, it is a beautiful object that is vaccinated against tetanus (beautiful rust finish, direct output from the bottom of a port!)

moixjj's review (This content has been automatically translated from French)" Das Füzzzzzzt!"

Mazzette La José Phuzz
5
So Sir, we have here a fuzz pedal for bass and guitar with a 4 knobs (texture, Fuzz, tone, volume), a true-bypass switch, an input and an output jack format, and an input for a power supply. The whole stands on a box in the format of two packets of cigarettes appears to have been carved from a piece of sheet metal of the Chernobyl reactor. Ah yes, there is also a small red LED. And knobs are Bonnard.
The pedal is analog to the old. It is mounted and wired by hand by bassist Nico is in a group of stoner ... Luckily, it's the style I play.
Here! No USB connection, no modeling, no bad components, ... is built for rock 'n roll. And that's exactly what I needed. The construction is solid is serious.

Setup is simple and clear. The four knobs work well on the sound and are intuitive. The fuzz controls the degree of saturation, tone can go from serious Kyussesque to his acute, the volume manages ... the volume. The fourth knob called "texture" of his acts on the fuzz. We find the sound you want quickly and easily can be corrected according to his amp or pedalboard. There is no manual, Nico responds readily to questions.
Note that this is an analog pedal, there is no fuzz 15 emulations. There is a warm and powerful fuzz that can be modulated. If you like, it's great, if not love, well you have to change the pedal. Given the incredible plethora of fuzz pedals, it's hard to come across that we need.
I put 10 because it's the sound I was looking for with simple effective adjustment options. To me it's perfect, and I'm a fan of analog circuits.

I have owned more fuzz and I even installed it myself. I spent hours watching videos of fuzz bass on the Internet. I never found anything I liked. Even Whooly Mammoth Zvex did not convince me at all. Finally I was listening to the samples at Mazzetti and have already ordered a pedal home, I knew it was good stuff. I found exactly the sound I was looking for. The Phuzz Jose does not cut the bass signal while adding harmonics that do not drown the base signal. The sound is organic without becoming too synth. The sound is powerful and hot ... aggressive and well. I use it with low ATK and I tested with a SansAmp Bass Driver Tech 21. I found only sounds that can be exploited to the stoner doom to the hardcore punk. All other pedals were messy and made notes almost inaudible, or made a sound that misrepresented the base signal.

The Phuzz Jose is exactly what I wanted. Unlike most of its competitors, it's a fuzz exploitable. I have tried many other models and I was always disappointed. It retains the characteristic of a bass and an amp while the fuzzer doing badly. I should make that choice much earlier. 180 ro-ros for a pedal mounted hand with a unique finish and a perfect sound, it's a very good deal. It complements my pedalboard with my ever-present Lowdriver of the same brand.

christk's review (This content has been automatically translated from French)

Mazzette La José Phuzz
5
A new production Mazzetti which at first glance can not be ignored and makes you want to connect it to see what she has in her stomach.

A vintage look that was found already on overdrive; finish here is "rust".

Configuration rather simple: Texture - Fuzz - Tone - Volume
I'm not usually very late in my settings and pedals "gas plant" scares me soon, no worries here, you connect, you move the buttons and whatever the setting was a sound that rips fuzzy and I do not mean that the settings are useless, far away and, leaning above you can find a really wide range of sounds.
No references, but is it necessary for such effects?

The strength of this pedal is obviously, like the overdrive of the same brand, grit and versatility, with a dynamic foolproof, this pedal will delight the most fastidious, allowing them to spend according to their attack of a sound "almost clear" a real big fat fuzz his family (I copy pasted my opinion overdrive but I do not know what else to say, change your sound and the attack reacts perfectly).

I use this pedal since its beginnings as a Beta tester, I still tested for parallel a lot of different products but I can not get rid of.
Value is impeccable since facing a high-end product in a range of ultra competitive price.
I would do this choice without hesitation and look forward to other brand products (which I beta tested Ausi) exit.
You can get a glimpse of the sounds on http://www.myspace.com/weareofoam (on bass and guitar)