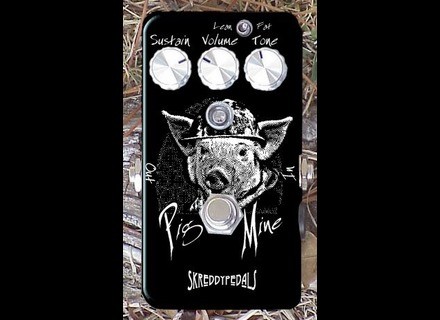 Skreddy Pedals Pig Mine
5
- + Fuzz boost effect (Big Muff + Power Boost does not cite)
- Pedal boutique meeting to order (six to seven months of waiting)
- Fully analog circuit to recreate the sound of an overdriven
certain David G. (Period 1977 to present)
- Has a connection "in", an "out" and a 9 volt adapter jack
standard
- Switch "true bypass".

A note in this category for this product? In the spirit and approach of its creator, there is no comparison with anything else but the source material that I do not have ... So let's say the intention is perfect!

- Potentiometer "Sustain for metering ... but also sustain both the intensity and character of the fuzz ("vintage" or "modern", more or less compressed)
- Potentiometer "Volume" to balance the output level with the input signal and boost it bluntly,
- Potentiometer "Tone" which acts as a filter,
- A switch Lean / Fat "which adds a bump in the midrange.

Each of these settings has a profound effect and clearly audible on the sound while retaining the original sonic identity.

If the howls of some black Stratocaster on a double album of the same nature as you have marked me in 1979 when he should really do it on purpose to not find his account!
The sound is there at your fingertips, instantly recognizable without looking. Certainly it is a bit easy and it will still annoy purists, but it works wonderfully especially as the setting offers a lot of sustain possbilités.
Make no mistake though, this pedal is not just for the solos on the contrary. Marc Ahlf focused meticulously to ensure equal efficiency of the circuit with the game and agree it's pretty impressive because each note still sounds distinctly.
Of course, there is a priority branch Tele (for the bestiary of 1977!) Or a Start but it also marries well with a whole bunch of other guitars equipped with P90 pickups or humbuckers without latest in " erase "character. Successfully maintain the transparency of what is there to a branch while its as accurate is the equation of squaring the circle solved!

No regrets, nor waiting, nor for the Massacre at tévéha duty unless for the same price you get to find a "Triangle" or "Ram's Head" period and a power boost in perfect condition .. .
Since all these rarities that do not sound properly in all-tube cranked, thank you for having been able to Skreddy simplify everything!

See all 13 photos of Skreddy Pedals Pig Mine »

View all 2 videos of Skreddy Pedals Pig Mine »

Other names: pig mine, pigmine