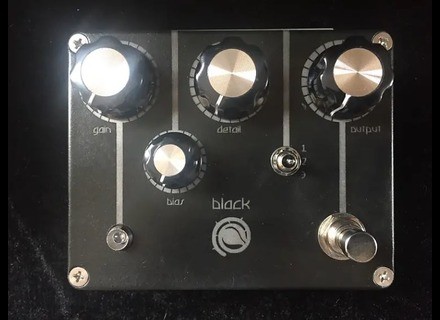 What impresses me about the Black Spiral Fuzz is its diversity and quality of sound - not only do you get a host of different tonal variations, but there's clarity to this pedal that cuts through the mix exceptionally well. There are other fuzzes that have more gain, and if working with a clean amp channel you may not get that massively fat and heavy fuzz tone (though its’ pretty good!); but if you have a touch of dirt or gain in your amp then the Black Spiral Fuzz not only compliments well, but tends to accentuate that gain and heavy-fuzziness. I very much like the Bias control and have found other fuzz pedals to be a bit much when it comes to that thick rumbling as the bias turns up; conversely, the Black Spiral Fuzz is more calm in that department, which means it sounds natural and usable as it is tweaked. The Detail knob refers to how much or how little treble you have in the signal, and this feature works wonderfully - when turned down it doesn't produce too much bass, whereas when turned up it doesn't sound brittle or shrill. But what should be noted is how significant the treble can be when you want it to, which helps tame those dark pickups (conversely, when turned down, it tames those thin pickups, e.g., Strat, very well to provide more fullness and evenness to the sound). The ability to select three types of fuzz is very nice, including N2 Germanium, N2 Silicon and a N2 carbon-based (middle selection) – all produced by Nanolog Devices. The N2 carbon-based transistor is so useful on this pedal, as it produces just enough of a drive/fuzz/distortion that does not seem fuzz-like in many respects... simply an overdrive that works nicely with both clean and dirty amps.

OVERALL IMPRESSION:
The Black Spiral Fuzz (previously known as the Black Rose Fuzz in its initial, limited run) was developed by a man who headed the DOD/Digitech Carcosa Fuzz project (among other pedals), although this fuzz definitely includes several upgrades and improvements with a sweet tonal quality that makes it applicable for both clean and dirty channels. The Gain, Bias, Detail (tone) and Volume Output all have significant ranges, which make it easy to sit the Black Spiral in the mix no matter your gear and the direction of your composition. Rather than sounding all fuzz, a mix of Gain with Bias in the Black Spiral Fuzz has more of a dirty amp or distorted sound, making it ideal for classic rock riffing, whereas the signal smoothes out perfectly if you're looking for that hint of grain when playing some Pink Floyd numbers. To top it off, you have three choices of Fuzz, including the usual Germanium and Silicon, but also a N2 carbon-based transistor that has qualities similar to Germanium, but smoother in the response - the N2 carbon selection definitely has that classic rock vibe and sounds awesome with both clean and slightly dirty amps. At a street price of $249 USD you get a lot of fuzz for the price and at a point very comparable to less-diverse fuzzes.

GENERAL USE:
Easy to use, with only a bit of tweaking required, you can achieve good sound almost immediately. You can choose a hard grainy fuzz (germanium), a smoother fuzz (silicon) or something between (carbon-based), all manufactured through Nanolog Devices (which does produce one of the smoothest and most harmonic silicon transistors on the market). As a side note, the demo video below shows the Black Rose Fuzz by the company Rose Pedals, but due to name restrictions the company is now known as Spiral Electric FX and the pedal is now the Black Spiral Fuzz (same great product and excellent customer service). Depending on how raunchy you want the signal, the Gain offers up a hint of fuzz for more of a slight breakup or distorted quality on the low end, to a full-on assault (more applicable for clean amps or those with only a hint of drive). The Bias is one of the best I’ve encountered in how it works with the Gain, which ranges from ‘no agitation’ to ‘agitated, yet reasonable’ (in other words, it doesn’t sound messy or over-the-top). With a clean amp you can get away with a lot of Gain and Bias, although I find once the Bias approaches full-on then the Gain should reduce to the 2-o’clock position or less (personal preference, of course). And with a lot of amp gain the Bias should be very low or turned all the way over counterclockwise. The Detail (treble response) is very sensitive, and a little goes a long way, although it really adds to the quality of sound in the Black Spiral Fuzz and makes each fuzz type stand out in its own way. Certainly how much or how little treble you add will vary, based on dark pickups and speakers vs. those that are bright or if you want a heavy drone-like fuzz for some Stoner Rock, etc. And certainly the silicon setting is more sensitive to more treble, often necessitating you dial it back slightly.

OTHER DETAILS:
The overall look of the pedal is cool, with a slightly beat up industrial appearance to suggest it's hardcore and meant to be a workhorse on your pedal board. Measuring in at 115 x 90 mm (about 4.50 x 3.5 inches), the all aluminum chassis has a charcoal black top over a raw metal body. The knobs have a mixed vibe to their appearance, both vintage and modern, and something that resembles knobs from a Moog synthesizer. The pots are smooth and solid to the feel when turned and are noiseless (no static or sound that should not be there); the same is true for the fuzz-type selector switch. You are able to lock in the various knobs to a favorite setting using the rubber washers that come with the pedal (they fit between the knobs and the pedal chassis) – you still can make adjustments, but it takes more effort in the turn. The foot switch has a solid click and a nice spring to it; it does not produce noise when the Black Spiral Fuzz is engaged or bypassed. The knobs and LED (a cool purple, which makes it obvious which pedal it is on your board in a dark setting) are far removed from the foot switch. All inputs, including power, are located in the back of the pedal, out of harms’ way and to save some pedal board space when cabling. The Black Spiral Fuzz does not run on batteries and requires a standard 9VDC power supply (drawing 7mA minimum).
Did you find this review helpful?yesno
»