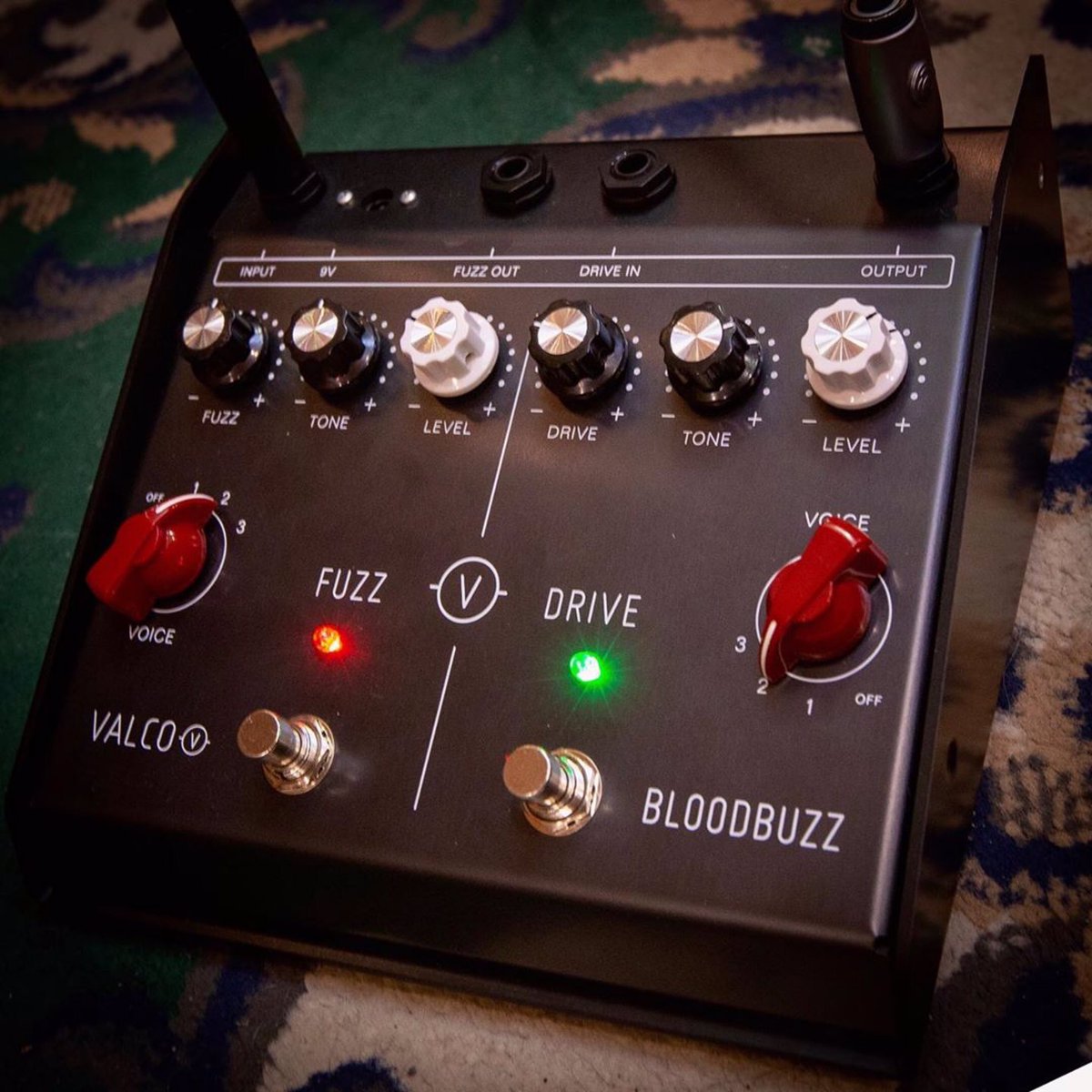 SOUND & FEATURES:
The accompany video certainly does more justice to what the Bloodbuzz offers than a written explanation ever could, but I’ll address the nuts and bolts of this fantastic pedal. The Fuzz side is not subtle, and even with the Fuzz knob turned all the way down (on a clean channel) there is an obvious growl. The Tone knob works only when selecting a Voice (1-3) and it is very broad in producing dark and deep to edgy and bright tones. When the Voice is off, you get the pedal’s unadulterated thick and raw fuzz that, when dialed back on the guitar’s volume, has more of a distorted quality. (Keep in mind that my guitars have humbuckers and the results certainly would be ‘thinner’ with single-coils). Voice 1 of the Fuzz has a mid-scoop that produces a velvety ‘Muff’ tone. Voice 2 has more mids, making it ideal for boisterous rhythm and lead. Voice 3 includes a gate with bias, both of which become more pronounced as you crank up the Fuzz knob; it has a variable bias dual-transistor amplifier stage for a variable drive function (affecting both bias and fuzz).

The Drive side has smooth dirt, although with good depth. Some overdrives have a thick grain, whereas the Bloodbuzz’s drive cuts through at high levels on clean amp channels and adds just enough energy to bolster dirty channels. In sum, this would be a low-to-moderate drive, but also can act as a clean boost with the Drive knob turned down and the Level up high. When playing on a clean amp channel a good rhythm crunch initiates with the Drive knob at 9-o’clock. Once past 12-noon there is more creamy saturation and less crunch – ideal for fat rhythm, but certainly perfect for soaring leads. The Drive also has three Voices, and when turned off you get the pure overdrive of the Bloodbuzz with no EQ. The other Voices include the Tone circuit and there is a modest reduction in the drive and overall volume when choosing these – therefore, you need to up the Level slightly to compensate. Voice 1 is merely the overdrive with the tone, whereas Voices 2 and 3 has the Tone circuit with a bass roll-off (more so with Voice 3). When working with dirty channels or dark amps/pickups, Voices 2 and 3 certainly have application, providing that drive, but with greater clarity and less mud.

Here’s a bit more technical information, which helps to explain the sound of the Bloodbuzz. The cable Input (going into the Fuzz) is buffered by a low-noise JFET op-amp, common with vacuum tube amp inputs; consequently, even with the Fuzz turned up to high levels the signal is very quiet with lots of headroom and very little background hiss or noise. Its quiet operation also is due to the circuit’s regulated analog ground to reduce hum, power supply variations and battery aging. The Drive section has a transistor emitter-follower at its input and the variable feedback JFET op-amp drive provides up to 40dB of gain, which means it has plenty of headroom coupled with a classic distortion/breaking-up quality when pushed to the limits. The output stage of the Drive also uses a low-noise JFET op-amp to provide 12 dB of clean signal boost.

Lastly, the construction is tank-like, with a black steel chassis. The footswitches have a solid click when engaging/disengaging and there is very little ‘background noise’ when doing so (no popping) and only when the Fuzz/Drive are at very high levels. The top knobs (Fuzz, Drive, Tone and Level) are of standard heavy plastic and the pots are very smooth when turned. The Voice chicken knobs are of good construction; each position (Off, 1, 2 and 3) clicks solidly into place. The bottom of the unit has four screwed-in rubber feet. All active components are surface mounted, the PCBs and ribbon are cables throughout with no unreliable point-to-point wiring, and the unit is lead- and cadmium-free (RoHS). The Bloodbuzz consumes very little power, operating on a single 9VDC battery or a standard 9VDC power source.

BASIC OPERATION:
Either Fuzz or Drive can work independently. If you want to use both concurrently, the pedal operates with the Fuzz going into the Drive by default (I demo on the video how to place Drive into Fuzz). Now, since the Fuzz is so dominant, even at low levels, it is best to have the Drive turned very low (both Drive and Level) when combining the two. The Drive’s level can be higher, but that would necessitate the Fuzz’s Level to be modest. Certainly there’s some tweaking to be had and a lot of sound variations in the process. On the other hand, I prefer the Drive into the Fuzz as this produces a smoother and more controlled tone. Each side has its own footswitch and respective on/off LED. As indicated, the Fuzz goes into the Drive; to have the Drive go into the Fuzz requires a patch cord that links Input and Output… then the guitar cable goes into the ‘Drive In’ and the ‘Fuzz Out’ goes to the amp. This is demonstrated in the accompany video, but also demoed is how to hook up the ‘Fuzz-into-Wah/Wah-into-Drive’ (which sounds impressively massive and thick). Both the Fuzz and Drive have an Off position, thereby bypassing the EQ involved. The Voices for both sides introduces the EQ circuit, as described in Sound & Features. The Level (volume) works with the Fuzz/Drive, in that more of one requires less of the other. Various levels of Fuzz or Drive work with a clean amp channel, whereas a little goes a long way with a dirty amp channel (to my ears Fuzz sounds and operates best on a clean channel, whereas the Drive is more flexible with either clean or dirty).

OVERALL IMPRESSION:
Bloodbuzz fits in the genre of vintage and classic, although it certainly works well with modern amps. The Drive is highly flexible for different situations and has a solid Rock tone that melds well with different gear. It certainly adds life to your favorite tone without adding too much color or change. The Fuzz side has several ‘character’ options, whether wanting a mid-scoop, a thicker mid-hump or a lot of bias for that rambunctious Cheese sound. And then there are the options of placing Fuzz into Drive or Drive into Fuzz (and running the Fuzz into a wah and back to Drive for even more sound variations). The Bloodbuzz’s flexibility and sound definitely is a strength and its only fault may be its footprint at 8 (w) x 7 (d) x 3 (h) inches or 20.30 x 17.78 x 7.62 cm. This 2-in-1 pedal does take up more pedalboard space than two ‘regular’ pedals (although there are plenty oversized drive and fuzz pedals that, when combined, are even larger than the Bloodbuzz). As well, the inputs/outputs are located on top of the unit, rather than behind, and this adds another 1.75-inches or 4.44 cm to its depth. For those trying to fit a hoard of pedals on a board the Bloodbuzz’s size may be a deal breaker; conversely, pedal minimalists and vintage purists should consider this new and improved remake of a classic.