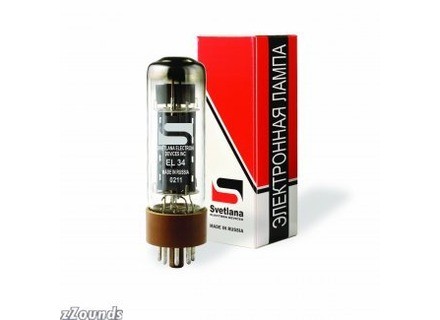 Svetlana EL 34
4
I recently discovered, after taking apart my Marshall combo, that these are almost always the standard tubes that Marshall puts into its amps. This has been their go-to tube for quite some time. I think you could say that they are the standard for the Marshall clean sound, as there are other tubes that they use for their dirty channels (at least the one I use). These tubes will sound great in any amp that uses this size tube. They are warm, clean, and well balanced. They aren't as in-your-face as the Fender Twin's tubes are, but I think that they do sound pretty great. They've got a nice level of natural compression, that keeps the sound nice and contained. They are very good about keeping the noise and unwanted microphonics down, which is always a good thing with tubes. I do, however, think that they prefer some guitars to others. I think that, at least in guitar amps, using a humbucker will get you a better sound than using single-coil pickups. I basically think that while these are certainly a reliable tube, they don't have the same smack and brightness and urgency that some other tubes do. There's not much to complain about, but not a whole lot to write home about either. If you are looking for a very pure clean sound, one that isn't going to send chills up your spine, then this is probably something for you. If you're looking for a brighter thing, you might want to look at the Siemens EL34 or some more high end tubes. Basically, these are reliable and clear, but not the sweetest or the most spectacular tube I've ever played, and I'm probably going to replace them with something else.
Did you find this review helpful?yesno
»

Jp6l6's review (This content has been automatically translated from French)" False but true still exists."

Svetlana EL 34
1
How to distinguish the true from the false?

The real is Svetlana SED = C = EL34, built to Svetlana factory in St. Petersburg. This is probably the best EL34 production. It delivers the most accurate and most balanced sound that is bringing a lot of momentum. It is super strong.

Here we see the false, the gotcha. Built in Saratov, factories New Sensor (Sovtek and company). Its internal structure and its sound reproduction is unrelated to the original. It roughly corresponds to an Electro Harmonix.

Both lamps have the same name due to a crappy trade agreement with the USA. New Sensor is an American company that builds its tubes Russia, Saratov. The trade agreement in question prohibits fortunately these Svetlana, false which are not even copies of the original, to be marked and the SED = C = logo. It should be particularly attentive to these entries before you buy.