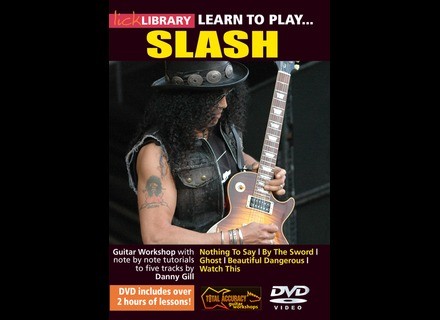 Learn to Play Slash is a guitar tuition double DVD with over 3 hours of Guitar lessons.

All the tracks included in the guitar lessons are taken from Slash’s eponymous new album ‘Slash’.  The single ‘By The Sword’ was released in March 2010 and featured Andrew Stockdale from Wolfmother, Ghost, was the only single on the album where anyone one else, namely Izzy Stradlin played guitar. The instrumental ‘Watch This’ featured Dave Grohl on drums. Danny takes you through these tracks using split screen to ensure you can  see what he is doing with both of his hands. With a calm approach and easy to understand simple instructions, Danny shows you how to break the tracks down into small playable pieces then rebuild them into the whole song again.

Learn to Play Slash is available to purchase now along with Slash Jamtrax, Quick Licks: Slash and other guitar tuition products.