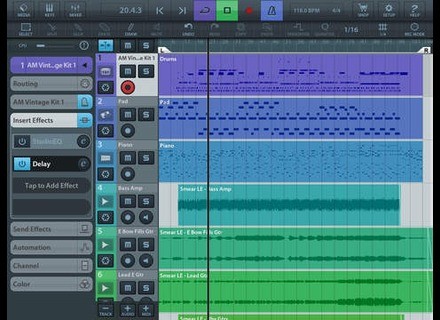 Cubasis LE is the compact version of Steinberg’s Cubasis sequencer for the iPad, and thanks to the project importer musicians can even open Cubasis LE projects in Cubase - both on Windows and Mac.
To access the Cubasis LE features, users simply need to download the free Cubasis LE app for iPad, launch it and connect a compatible IK iRig accessory to their iPad. Products that unlock the feature set include the iRig Keys line of MIDI controllers including iRig Keys Mini, iRig Keys and iRig Keys Pro; iRig Pads 4x4 MIDI controller, iRig HD, iRig Pro and iRig Pro DUO interfaces, and the iRig Mic HD and iRig Mic Studio digital microphones.
When users upgrade to the Cubasis full feature set, they also get Inter-app audio, which means musicians can use their IK hardware and IK apps like AmpliTube products, SampleTank, iGrand Piano and iLectric Piano inside of Cubasis LE.
With IK’s iRig Pro DUO, players can record multiple channels in Cubasis LE simultaneously. They can connect everything from high-end phantom powered condenser microphones to guitars, basses, keyboards and more. Each channel has its own input gain control so players can dial in the adequate amount of input signal for recording, and players can also hook up their outboard MIDI controllers thanks to the included TRS to MIDI-DIN cables and dedicated MIDI in/out jacks.
Cubasis LE unlocked features include:

Cubasis LE is free to download on the App Store and the features set will be unlocked once compatible hardware is connected.