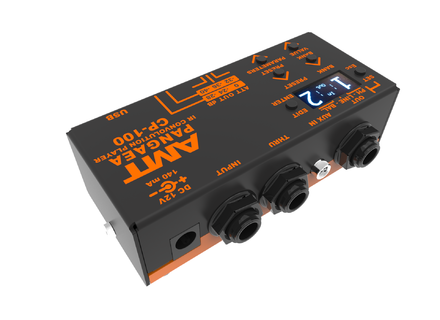 I own a racked Two Notes Torpedo VM202.
As I couldn’t find a used Torpedo C.A.B. for a bargain price (which shouldn’t come as a surprise considering the product’s high quality), I opted for this AMT which is an IR player allowing to access parameters.

I got the model with the orange inscriptions on while the shop’s website advertised it in white – but that’s juste a detail.

The idea was to make a transportable pedalboard.

This tiny black box makes a great job in every situation, but as it’s not MIDI compatible you’ll only get a single cab per preset so you’ll have to get down and load another preset, but sometimes a single cab is well enough for a whole show

You’ll have to read the manual is you want to understand which IR CAB + MIC you’re loading.

I also let my brother use it. He often works as a FOH engineer and I wanted to see it the Pangea could do the job to replace a mic+cab setting in stage: well, clearly the result is exceptional! Depending on the amp used, it has either been plugged in the FX loop allowing to feed the mixer with a signal level independent from that of the tube poweramp part of the amp, or at the output of a loadbox.

I heard it can even be plugged between the amp’s output and the speaker using the THRU jack plug, but I have no use of such a setup and haven’t tried it in order to protect the amp.

It’s so small that it can be used indifferently in a home or professional studio, I have already lent it tu be used for remiking tracks.

It also works wonder with bass IRs, while testing it the bass player ended up saying that with a total 3 pedals (including the Pangea) he couldn’t say whether his sound was that from his amp or from an IR straight out of this tiny black box. In the end, he bought one!

I’ve loaded some free cab IRs in addition to those that come with the device, plus also additional IRs by OwnHammer...

This small device will easily find its place on your favourite pedalboard, between preamps and dists and before modulations, delays and reverbs.

I think it’s a perfect complement for anyone using many vintage analog pedals but also those not using tubes at all.

I’d love to try this with a FREDAMP pedal preamp, or with a Two Notes LE CRUNCH...

I frankly recommend this product, I first hesitated with LOGIDY EPSI but this AMT-PANGEA suite me better as to the way to access the various parameters.

Small enough to make it the pedalboard equivalent of what a USB key is to a computer, I still regret the lack of an editor and the absence of a power tube stage simulation (like on products by Two Notes and Fractal), which addition would have made the Pangea perfect.

- Misses a PC preset editor
- No MIDI
- You can’t do without reading the manual if you want to understand which IR CAB + Mic you are loading
Did you find this review helpful?yesno
»