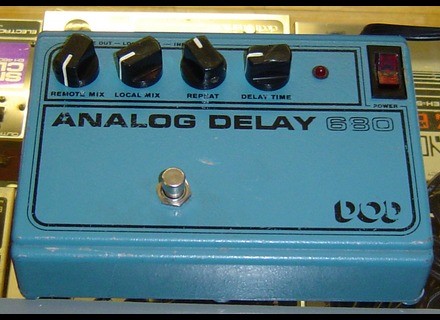 DOD 680 Analog Delay
5
The DOD 680 Analog Delay is a guitar effects pedal that can be used with any electronic instrument. I've only got experience using the 680 with electric guitar, but you can deifnitely use it for anything. The pedal is analog, as the name states, and it has 1/4" connections for input, and both a 'local' output and a 'remote' output, which is essentially just two separate outputs, and you've got control over the level for each independently. It has a power cord attached to it that you plug directly into the wall. The pedal isn't rack mountable as it's a foot pedal.

The make up of the DOD 680 Analog Delay is really easy to understand. It doesn't have as much control as I'd like, but the trade off is that it's a really simple pedal. The parameters that you have to work with include knobs for delay time, repeat, and local and remote mix, which allows you to send different amounts of the effect to the two separate outputs. I haven't seen a manual for the 680, so I can't say that I know anything about it.

The tone of the DOD 680 Analog Delay is outstanding all the way around. Even for having a limited amount of parameters, it's definitely possible to get a number of different delay sounds. I just recorded an album where we used this pedal for the bulk of our delay guitar parts, and it was able to satisfy the need for both short and longer, more spacey delay sounds. It's a great pedal for getting a super spacey lead guitar sound, especially if you throw some overdrive into the mix. It's definitely got the grit and fullness to it that you'd hope to have with any analog delay. It can also get some pretty crazy sounds if you mess with the delay time rapidly.

I'm overall a huge fan of the DOD 680 Analog Delay. It seems to be a little known pedal, and it doesn't seem like there are an excess of these floating around. Until I just used the DOD 680 Analog Delay on a session, I hadn't even heard of this pedal for whatever reason. The price seems to be pretty reasonable if you can find one used, but that might not be as easy as finding some other pedals out there. Overall, this is probably my favorite pedal that DOD has made...

Other DOD delays/Echos/Phrase Samplers for Guitar